Air Tokyo will Close at the Conclusion of 2015

Air Tokyo will Close at the Conclusion of 2015 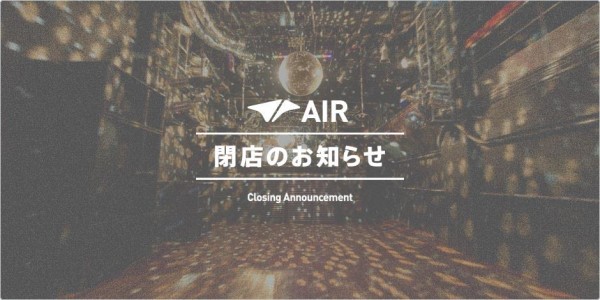 Sad news today as Tokyo’s Air Club is set to close at the conclusion of the year. Since its inception in 2001 in the Daikanyama District, Air has been a center for top-notch house and techno bookings from around the world for the last fourteen years. For undisclosed reasons, the club will hold its final night on December 31, 2015 to ring in the new year. No lineup has been announced as of late, but details are to be determined in the upcoming months.

The club issued the following statement on their website:

To all the party people that have shown AIR so much love,

In September, 2001, a light was lit in one of the side streets of Daikanyama.
It was a light that brought hope to the beginning of the 21st century club scene in Tokyo.
For the 14 years following its opening, AIR has walked a long music journey together with all of you,
but that journey has finally reached its end.
The climax of that journey will be December 31, 2015.
It has been decided that AIR will see its final party on New Year’s Eve.
From all of the staff at AIR, thank you so much for your support over the years.
We will endeavor to bring you the best parties right up until we close.

We look forward to being able to dance with you all again in a new space some day.
We’ll Dance Together in the Future!