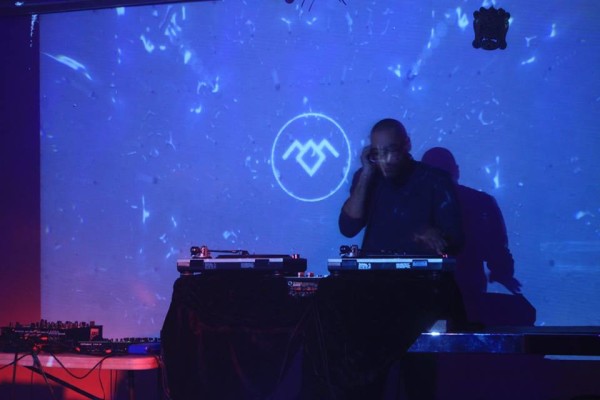 With a name inspired by the trippy room with red curtains and a chevron-patterned floor in the television series Twin Peaks, the Black Lodge is the party portal to the underground techno dimension that Los Angeles locals need to get acquainted with. After some deliberation and attending countless “techno” parties, Black Lodge is about the closest you can get to a proper dose of straight techno direct from Detroit, Holland, and Germany.

On January 22, Black Lodge and music blog That’s Deck hosted a warehouse party out on the fringes of East LA featuring a closing set by Charles Manier, an analog acid set by 2AM/FM, an extended vinyl-only set by Fanon Flowers, and an electrifying electro warm-up session by Black Lodge residents Force Placement and Kosmik, Simonowky, and SwarJi of That’s Deck.

Not your usual warehouse party to say the least, the intimate space possessed an urban mishmash of postmodernist decor. The miniature Buddha fountain in the corner pumped zen into the room while the road sign tabletops held drinks and other objects floating around. And there at the center of the room stood a small elevated stage with a fort of rogue static television screens and psychedelic visual sequence provided by Garett Gioia.

The opening group threw down a volley of old school electro and industrial music, taking the time to invite Fanon Flowers to the turntables. Fanon Flowers played a solid three hours on vinyl, earning the utmost of my admiration for showcasing his skills at hand-picking and mixing in each successive track. Los Angeles needs to catch on to the extended set, a golden standard that techno artists should be held to ordinarily rather than extraordinarily. Not once did I feel waned on the techno journey. 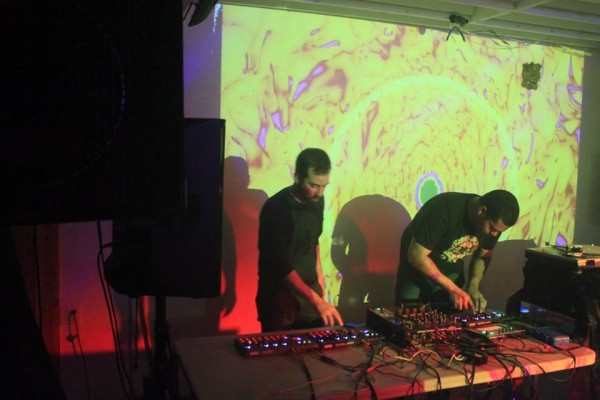 JTC aka Tadd Mullinix and D’Marc Cantu as 2AM/FM

Comprised of Ann Arbor legends D’Marc Cantu and Tadd Mullinix, 2AM/FM followed Fanon Flowers with a vigorous live acid set enhanced by an equally acidic candy-colored swirl backdrop. The duo started on an uppity note and concluded with some driving heavy synth play, lending Tadd the upper hand to finish off as Charles Manier with the most brooding acid set of the night.

From impressive bookings to an unpretentious crowd of underground music fans, it looks like I’ll be returning to have my weekend dose of proper techno that LA sorely lacks. Come to the Black Lodge, and you will have the answer.