A Recap of Epizode Festival Vietnam 2020 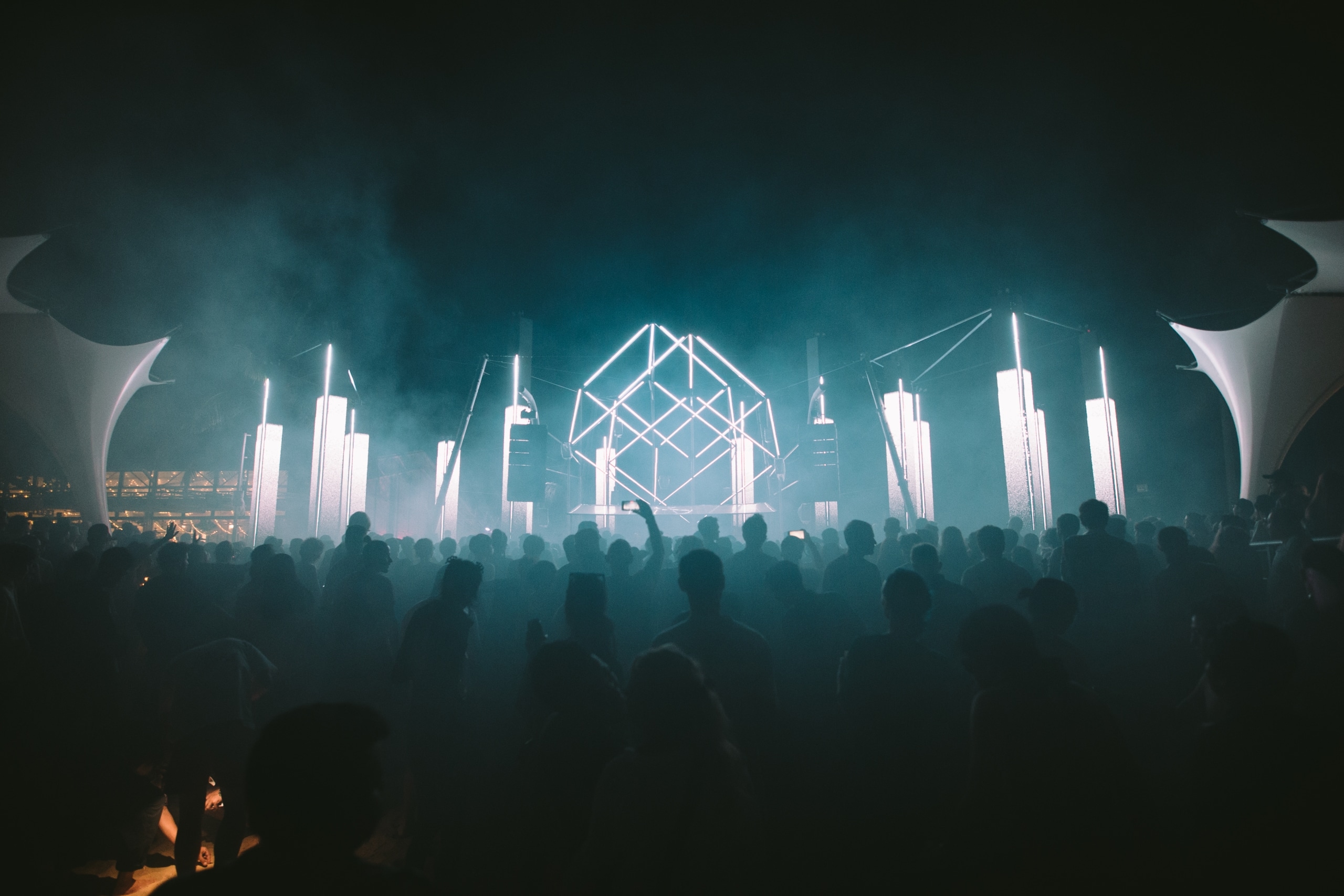 A Recap of Epizode Festival Vietnam 2020

Taking place on the island of Phu Quoc, Vietnam, Epizode Festival was spread over 11 days with over 140 different artists that included the likes of Ricardo Villalobos, Carl Craig, Jamie Jones, Sonja Moonear, and many more.

11 days of house, minimal techno music at a festival might seem overwhelming, but Epizode was organized in a manner was more like an extended vacation rather than a non-stop party. Although there was a total of four stages, only one would have music during the day and only three would have music at night. Then there also would be one stage open for after-hours on select days.

This year also had Yoga sessions, gong baths, and meditation sessions as well as a Concept Market, Beauty Bar, Tea Lounge, and an area for talks. Attendees were able to simply chill and relax on the beach during the day with fresh coconuts or leave the festival site and grab some seafood at the nearby night market or one of the many restaurants within close proximity without missing any of the main acts.

Long Beach, which is the main stretch of beach on the island, was only a 15 minute taxi or motorbike ride from Sunset Sanato where Epizode was being held at. Most of the better-known artists didn’t perform until after midnight, allowing for lots of time either explore the island of Phu Quoc which is home to the world’s longest cable car as well as stretches of white sand beaches and uninhabited islands. 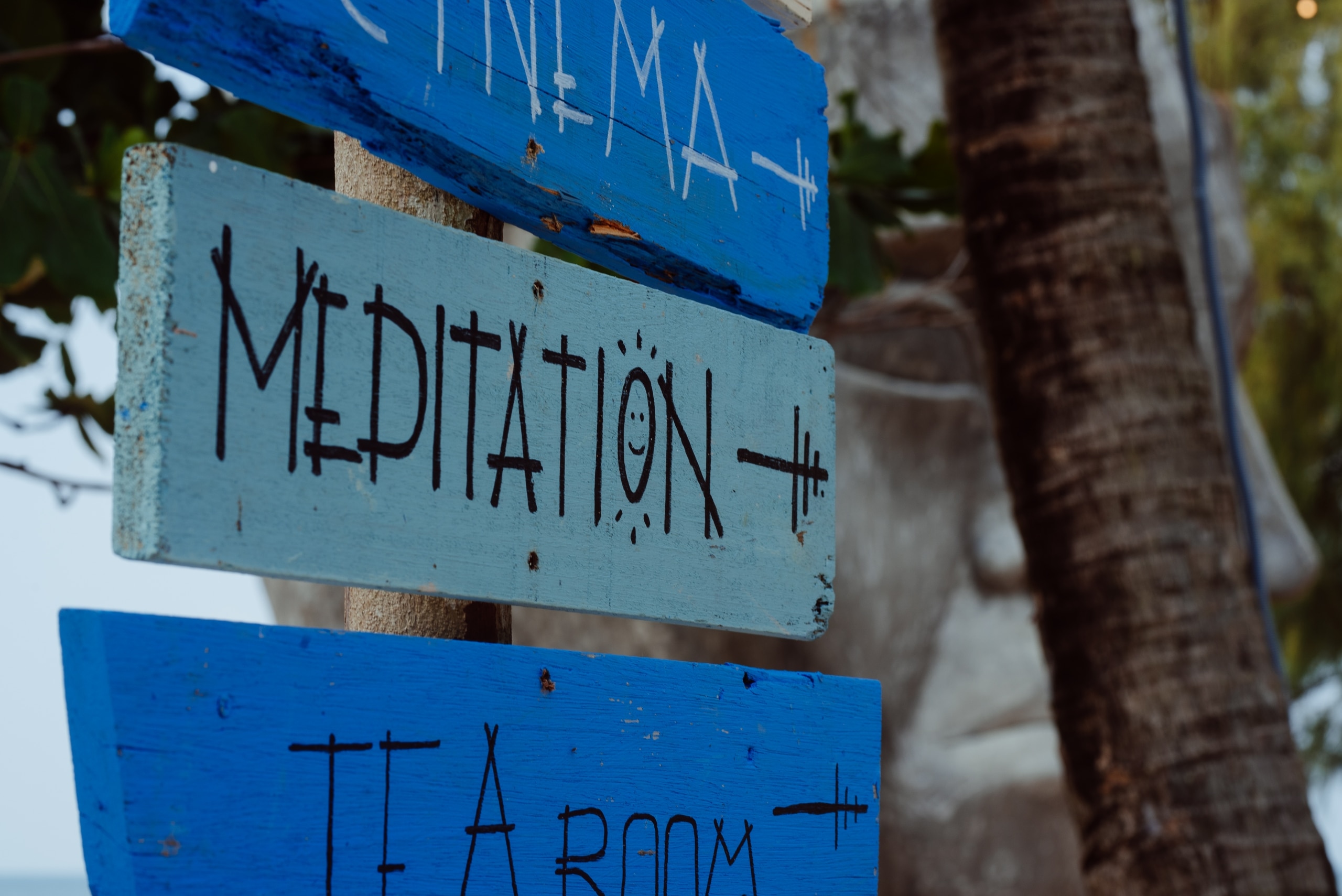 Arriving on the first night of the festival, Friday, December 27th, we decided we wanted to get some rest before renting a motorbike and making the journey down to the Sunset Sanato Beach Resort. Unfortunately, this meant missing out on the opening sunset set from Karina Kaakyan as well as Konstantin Sibold and Anja Schneider at The Frisbee Stage from 12am to 4am. Luckily, we had lots of great music in store for the coming week. The Frisbee Stage was the only stage open during the 1st day of the festival and was also the only stage that had music going on in the afternoon and early evening hours.

On Saturday, December 28th, the Indian senior meditation teacher, Punnu Singh Washu began hosting meditation at The Whale Temple and would continue to host sessions throughout the festival on alternating days. Adil took to The Frisbee Stage for a 3 hour sunset medley before Ballinsky kicked things off at the main stage followed by Alvaro Suarez, Agoria, and Behrouz.

Agoria’s coalescing of vocals, melodies, and techno surely got the crowd riled up ,bringing some positive vibes and energy for the New Year and decade while Behrouz brought the main stage to a close with a magnificent 3-hour set that went until 6am. Although the bulk of the crowd seemed to be present at The Main Stage, Mica, Herb Cabral, and Alinep played at The Eggs Stage from midnight to 4am and Cinthie and S.A.M. played at The Frisbee Stage from 2am until 8am. For those who wanted to keep the party going, The Shell Stage kicked off the afterhours at eight in the morning with Ballinsky, Gevorg Simonyan, and Sancho and continued until 4pm on Sunday. 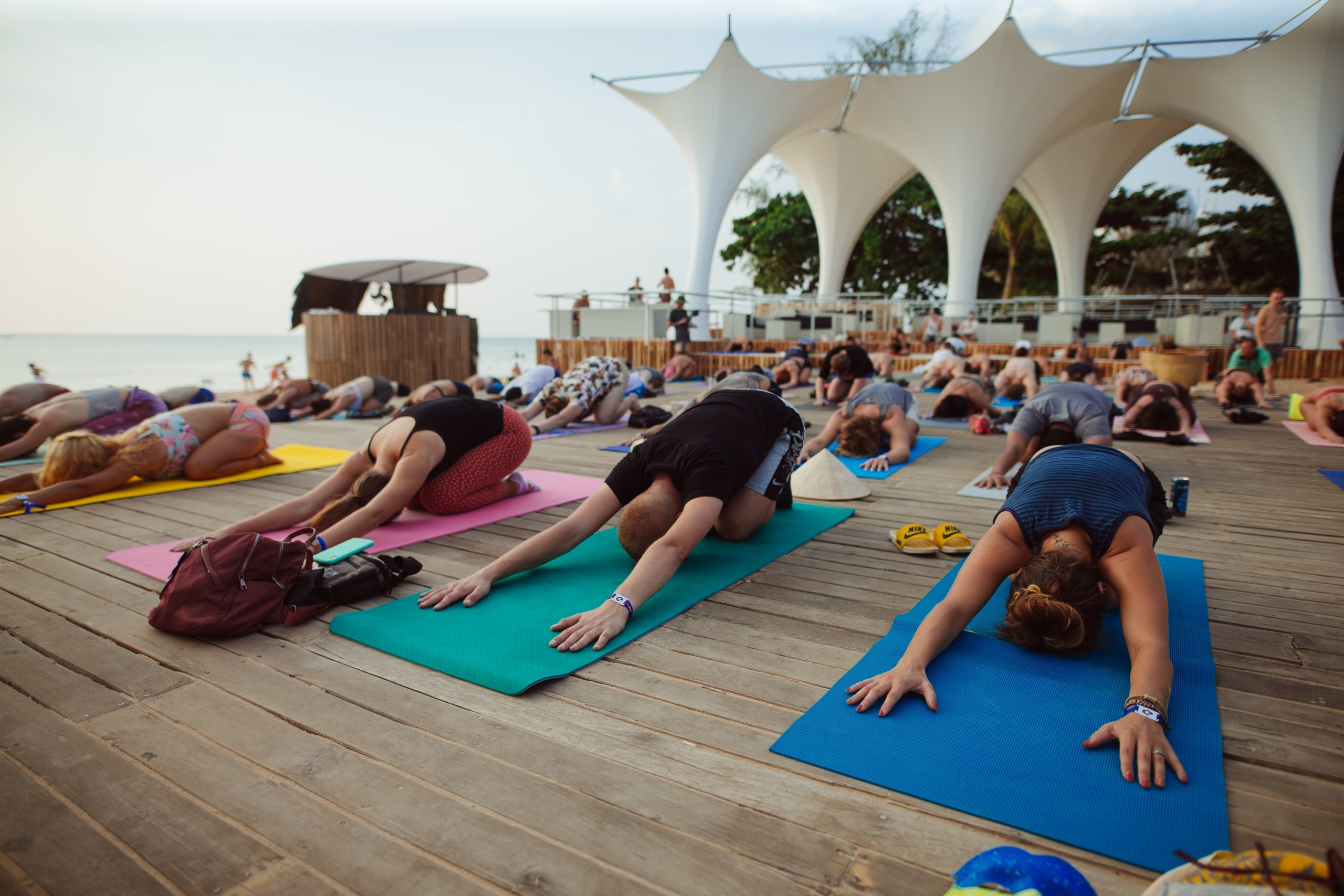 Unfortunately, we just didn’t have the stamina to go past 6am and ended up heading back to the hotel before we could catch the afterhours tunes. Waking up refreshed and recharged, we headed back to the beach and caught the gorgeous sounds of Alvaro Suarez accompanied by his violin and an Indian musician while the magnificent sun was going down along the coastline. Yoga then took place at the main stage letting us take a break from the music, which would start back up an hour and a half later. Kolford, Trikk, Red Axes, and Butch took to The Main Stage while Elliott English went b2b with Funkwise at The Eggs Stage followed by Se/Rio, Ben Pound, and United who kept the music going until 8 in the morning. PAWSA, Egyptian Lover, and Matias Aguayo were at The Frisbee Stage from 12am until 8am, Monday morning while the after hours continued the tunes at The Shell Stage until 4pm with United, Rocca Blaze, and John Loo.

Dancing until 6am proved difficult enough after being under the hot Vietnamese sun all day let alone until 4pm, so we once again got some rest and recharged before heading back to Epizode to witness The Gardens of Babylon at The Main Stage which just hosted an event the past weekend in Bali. Ritual Frequencies and Punnu began the opening ceremonies with a guided meditation and some relaxing, melodic harmonies before Sam Shure, Parallells, Carlita, Gab Rhome, and Rammo graced the decks. Levi Oi, Goosebumps, Di Linh, and Marco Yanes played at The Eggs Stage and Christian Loffler, Kiasmos, and Karina Saakyan worked the crowd at The Frisbee Stage.

Tuesday, December 31st aka New Year’s Eve saw the beauty bar open up at The Concept Market and Bruno Curtis bringing us from day into night. Yoga once again took place at The Main Stage while a gong bath took place at The Frisbee Stage. A tea ceremony also occurred at The Whale Temple a bit later at 8pm.

Kolford, youANDme, and Lehar then brought us into 2020 at The Main Stage with Lehar playing a 4 hour set followed by Satori who was on for another 2 hours until 6am. At The Frisbee Stage was The Giegling Showcase with some marvelous techno beats from Molly, Leafar Legov, Map.ache, Konstantin, and Paquita Gordon that kept the music going until nine in the morning. At The Eggs Stage was Sancho, Yate, and Bruno Curtis along with HurryUp who closed out The Eggs Stage. The 2nd rendition of the Giegling Showcase then took place again with DJ Dustin, Elli, and United taking to the decks to begin the new decade.

After a bit too much champagne, seafood, sun, and techno music, we decided to take it easy on New Year’s Day as did many others. It seemed that many working the festival also needed a break that day since only The Frisbee and Shell Stages had music. Satori played the sunset set and The Blue Shadow Showcase played host to Kino Todo, Echonomist, Chaim, and Jenia Tarsol at The Frisbee and Shell Stages. 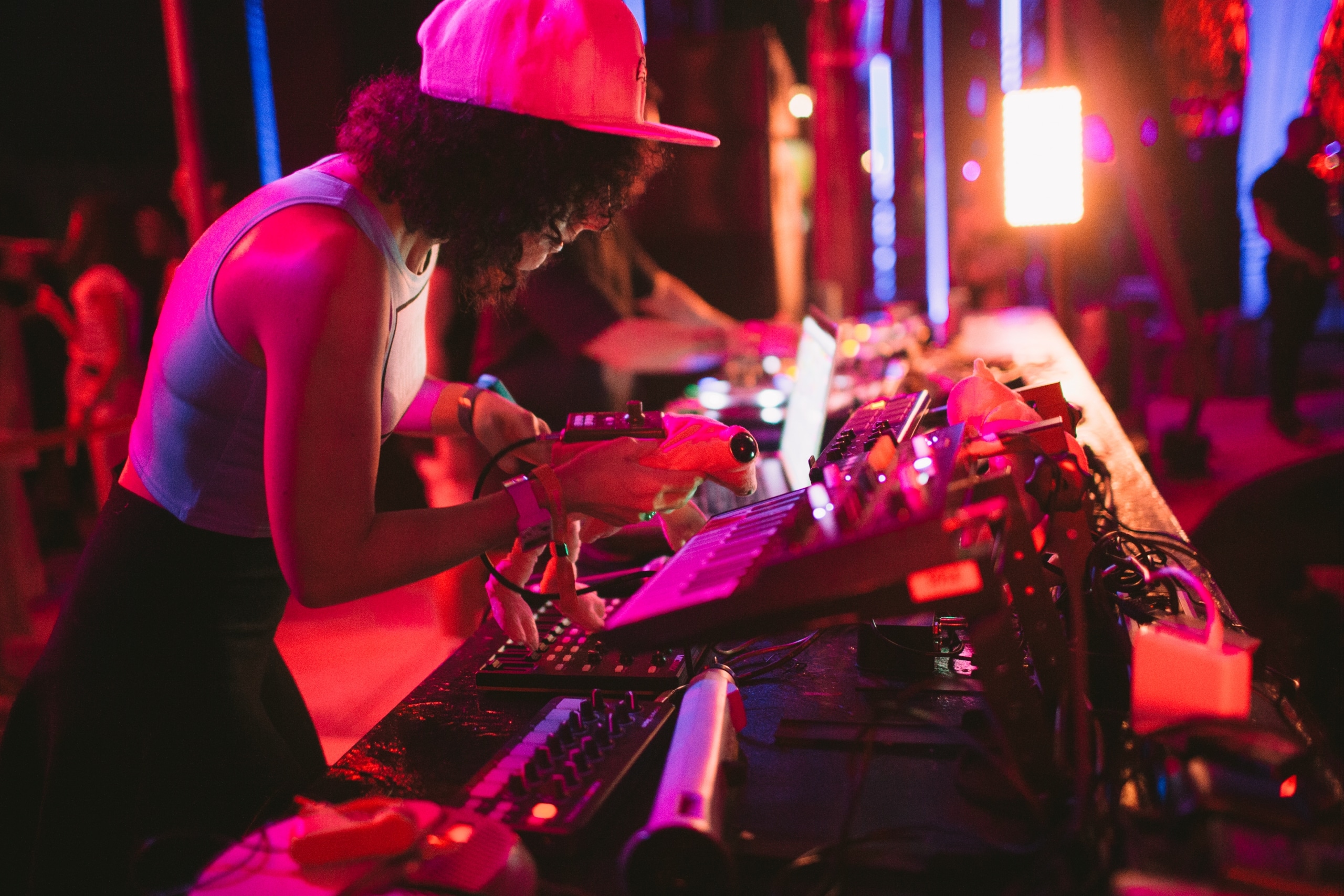 On Thursday, January 2nd, 2020, the daytime activities started up once again with Yoga at The Main Stage and another talk about the Plastic problem at The Whale Temple. The Tea Ceremony took place again where GLAV Chai offered a global selection of teas aptly labeled “Energize”, “Harmonize”,  and “Relax”. Following The Tea Ceremony, Balinsky, Chaim b2b Lehar, and Giorgia Angiuli – who we thought played one of the best sets of the festival – took to The Main Stage followed by Stefano Noferini closing out the main stage for the night. Bobby., Craig Richards, DJ Masda, and Francesco Del Garda spun at The Frisbee Stage and the Tel Aviv nightclub, The Block played host to The EGGS Stage bringing along Israeli artists, Hilu, Arapu, Asael Weiss, and Tal Cohen.

O.BEE then took festivalgoers into the early hours of the morning at The Shell Stage and then right after was the Sunrise Showcase with Gevorg Simonyan, Petre Inspirescu, Arapu, and Gescu. A beach clean also took place prior to sunrise and Open Decks contest winner, DJ Bin played at the Frisbee Stage.

Unfortunately, we weren’t able to attend Epizode for all 11 days and Friday, January 3rd, 2020 happened to be our last day attending the festival. We witnessed Zendid for our last sunset on the island at The Frisbee Stage and participated in some Yoga that took place at The Main Stage. Mashkov, William Djoko, Loco Dice, and wAFF rocked the main stage for our last day of the fest while Ernest Kalinin, Ouissam, Sunju Hargun, and Dott spun at EGGS Stage and MDRNTY hosted The Frisbee Stage with Given, Alci, Djebali, DeWalta & Shannon LIVE, and Apollonia.

With an incredible array of artists and the addition of a single-use plastic eco-policy, yoga and meditation, gong baths, and tea ceremonies, Epizode Festival surely attracted an eclectic and diverse crowd this year. Festivalgoers traveled to the little island of Phu Quoc in Vietnam from as far as the US and South America, as well as places such as England, Scotland, France, Germany, Croatia, Ukraine, Russia, and many more.

The picturesque scenery set the perfect backdrop for Epizode where just enough took place to keep one entertained but there wasn’t too much going on at once where one might feel overwhelmed. 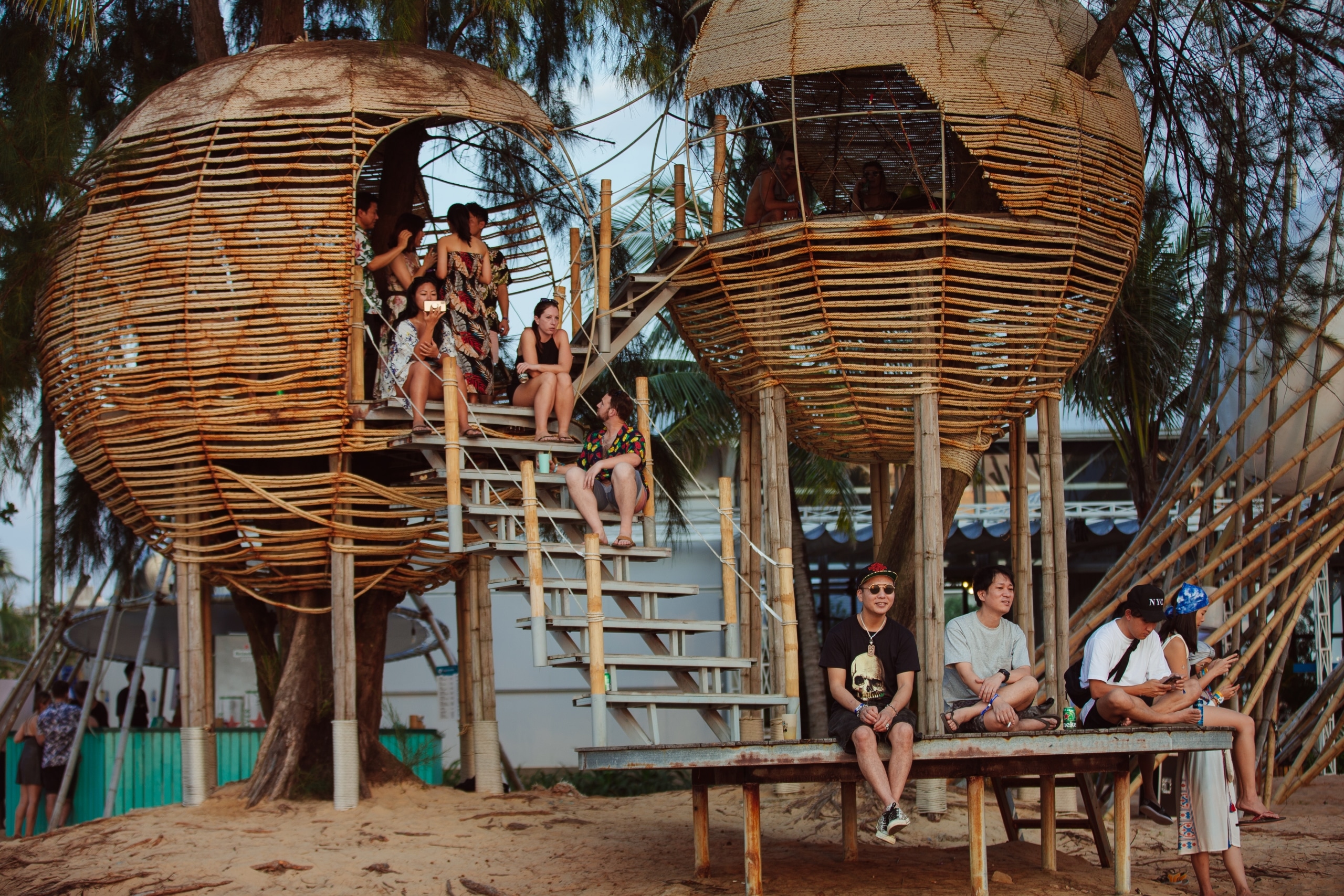 Enormous art installations made of bamboo donned the beachfront along with structures that allowed attendees to hang out and relax in as well as socialize. The stages were intricately woven together with the main stage containing an array of massive narrow LED screens and a layered wooden dance floor. At night the stages and art installations came to life with hanging jellyfish that glowed different colors and multi-colored lighting throughout the festival.

Although we weren’t able to stay for the entire length of the festival, Saturday, January 4th into Sunday, January 5th played host to The Cymatiks Showcase with artists such as Agents of Time, Mathew Jonson, and Fideles at The Main Stage. Sonja Moonear, Raresh, and Ricardo Villalobos played The Frisbee Stage as part of the ARMA17 showcase with Ricardo going b2b with Raresh. Naoki Serizawa took to the Main Stage on Sunday, January 5th followed by Birds of Mind. Patrick Topping went b2b with Eats Everything for a 4 hour set and Day 2 of the ARMA17 showcase saw artists such as Phuong Dan, Abelle, and Ben UFO. HVOB then played a live club set followed by Moodymann and Carl Craig later on at The Frisbee Stage. Jamie Jones and Lilly Palmer closed out the main stage while Nicolas Lutz, Binh, Vlada, Digby, Denis Kaznavheev, Grevorg Simonyan, and Rhadoo continued to close out the festival from early Tuesday morning into early Tuesday evening at The Shell Stage.

Check out https://epizode.com/ for more info and to find out when tickets go on sale for next year.