[PHOTOS] A History of the Second Wave of the Rave Scene 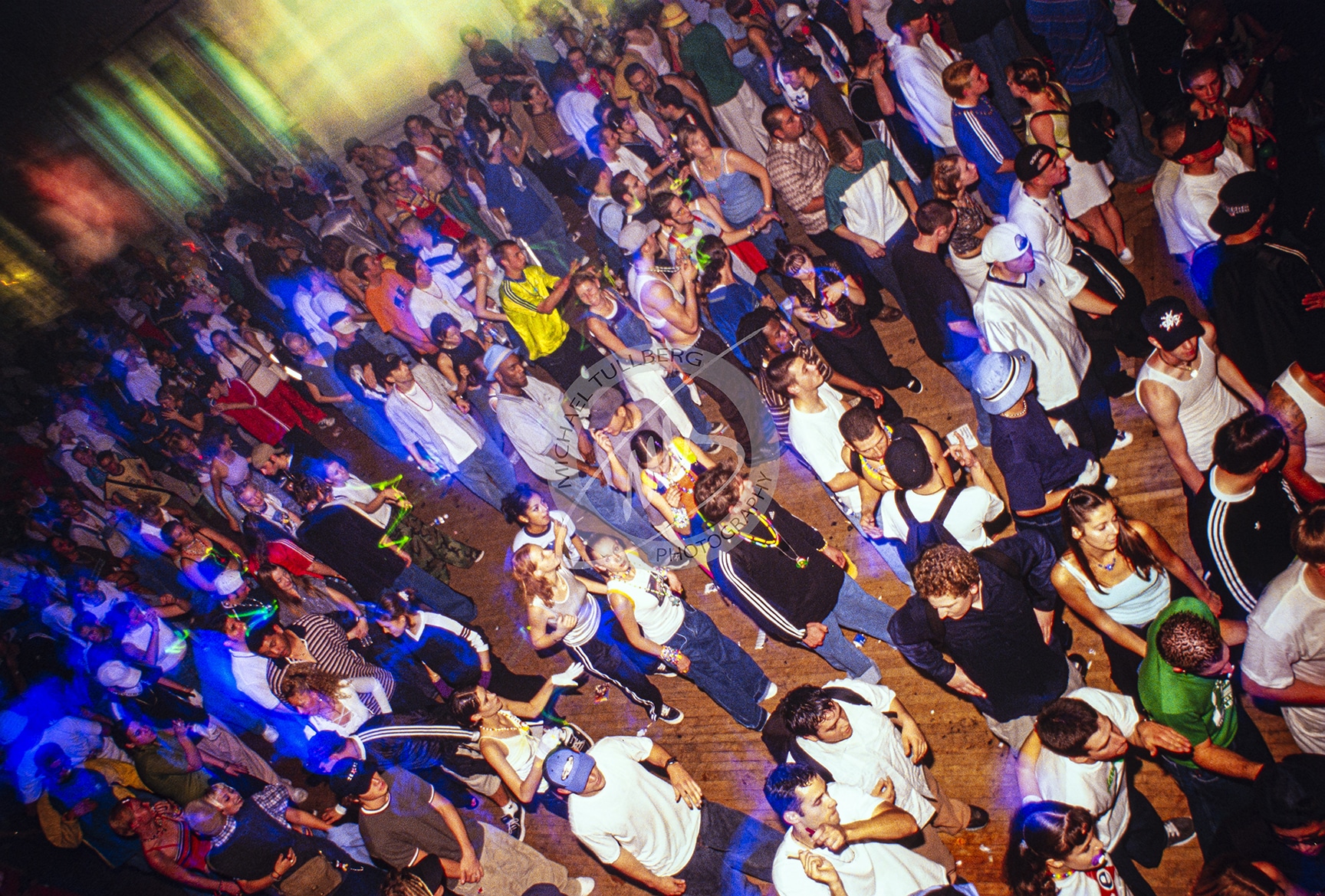 [PHOTOS] A History of the Second Wave of the Rave Scene

I’ve been very fortunate to have been involved in the rave scene for as long as I have. Over the course of 25-plus years, I’ve been at some of the biggest and most important moments in rave history, starting in the warehouses of the mid-90s LA underground scene. Funny how some things don’t change that much over time. Back in those days, I ended up photographing and writing for most of the dance music magazines of the day. This enabled me to stick myself inside the core of American raving culture, which was right here in Southern California for nearly a decade. We were so incredibly spoiled during that time period since we had the best DJs in the world coming through here on a regular basis. There was no shortage of gigs for them to play at, whether the event was in a club, a mansion, a desert, on a beach, or a mountain. From the smallest after-hours to the biggest massives, we truly had it all here. Accordingly, most of the photos presented in this collection are from the L.A. area.

What follows here are ten photos that depict important milestones in the early growth years of the electronic music underground. This time period is one of the most critically overlooked eras in the history of American popular culture and deserves to be remembered and celebrated. In truth, they only barely scratch the surface, but hey, memorializing a crucial period in American music has to start somewhere, right?

Enjoy the trip back, and I hope this leads you to doing a deep dive into this most excellent of hot tub time machines.

Michael Tullberg is the author of Dancefloor Thunderstorm. Purchase your copy here. 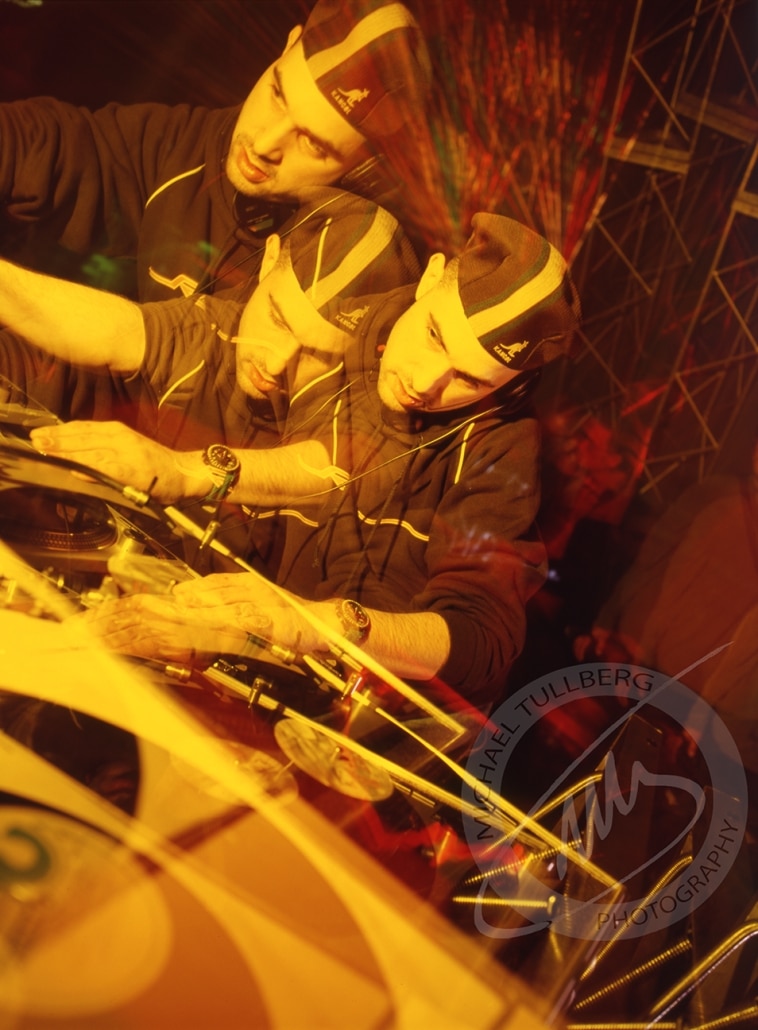 The L.A. Sports Arena, long gone now, was the site of many large raves held in the metropolitan L.A. area. Both Insomniac and GoVentures held several events at the facility, occasionally teaming up for special gigs (a concept that would likely never fly today at Insomniac). One such party was Together As One, the annual New Year’s Eve rave that regularly drew tens of thousands. The 1999 version was the best of the lot, and a major reason for that was this man, the original NYC rave godfather Frankie Bones. Although he didn’t headline the event—that honor went to Carl Cox—it was Frankie who stole the show, at least as far as I was concerned. 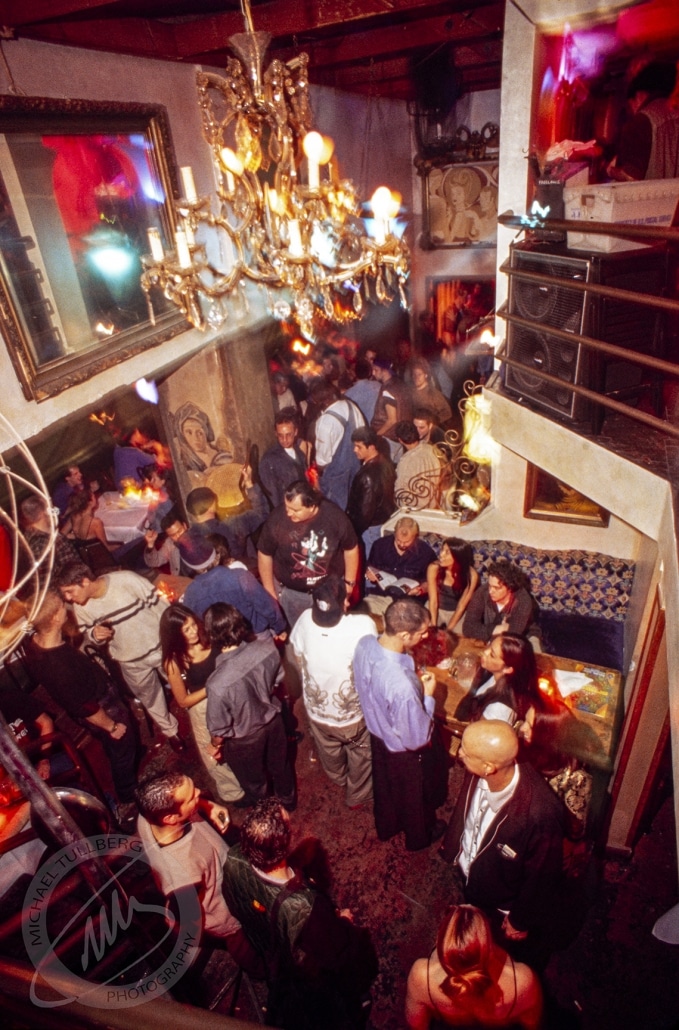 Atmosphere shot at the Bud Brothers Monday Social at Louis XIV in Los Angeles, CA in 1998.

While most of L.A. clubland originally shunned electronic music (a big reason why the rave scene thrived on the West Coast in the first place), one major exception was the now legendary Bud Brothers’ Monday Social. The creation of promoter/DJs Mick Cole and Freddy Be, the Monday Social presented top-notch global DJs in a wonderfully intimate, cozy atmosphere. The club attracted a huge stream of DJ and musician regulars, which over the years included the likes of David Holmes, BT, DJ Rap, DJ Dan, Donald Glaude, the Crystal Method, Colette, and many more. It became the Cheers of the electronic music world, because like in the old sitcom, everybody at the Monday Social seemed to know who you were, whether you were an artist, promoter, or a common clubber. Thoroughly outlasting just about all other clubs of any kind in the city, the Monday Social ran through six venues over the course of twenty years…a formidable accomplishment, indeed. 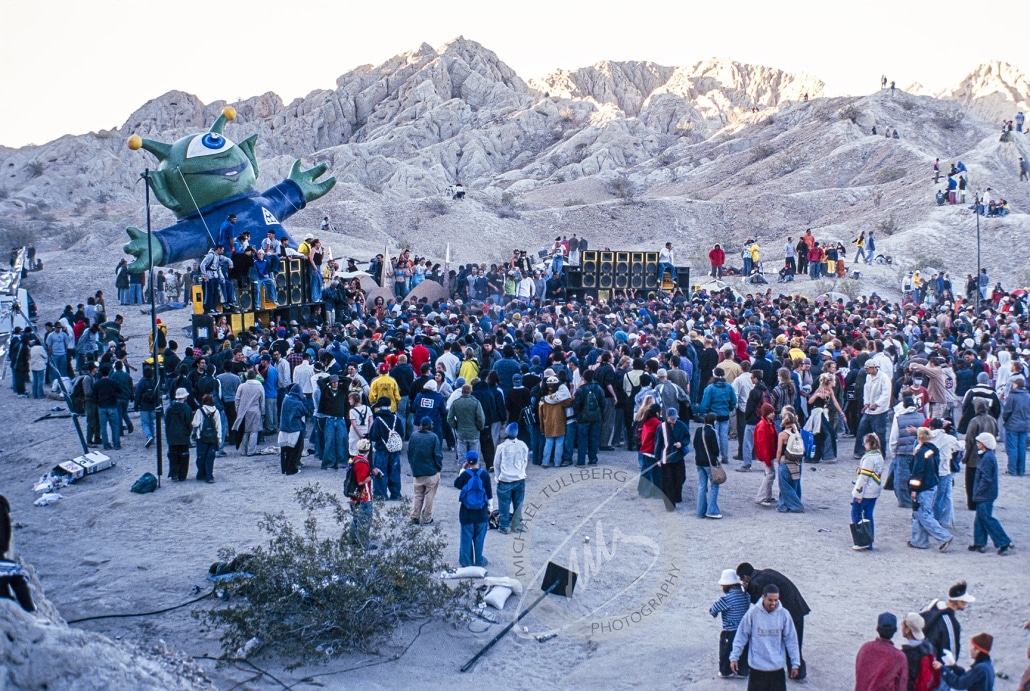 The California desert has been the site of parties of all kinds for decades, from the old hippie desert rats onward. It was one of the rave scene’s most exotic locales, and many times thousands of ravers trekked out into the middle of nowhere to celebrate life through dance amongst the cactus and rattlesnakes. The most famous and longest-running series of events was the Moontribe parties, while somewhat further back were the Dune raves, where this photo comes from. There were four Dune raves in total, featuring most of the best of the West Coast trance DJs such as Christopher Lawrence, Sandra Collins, and others. Dune 4 was the largest of the bunch, and it also had the inauspicious honor of being hit by a sandstorm in the middle of the party. 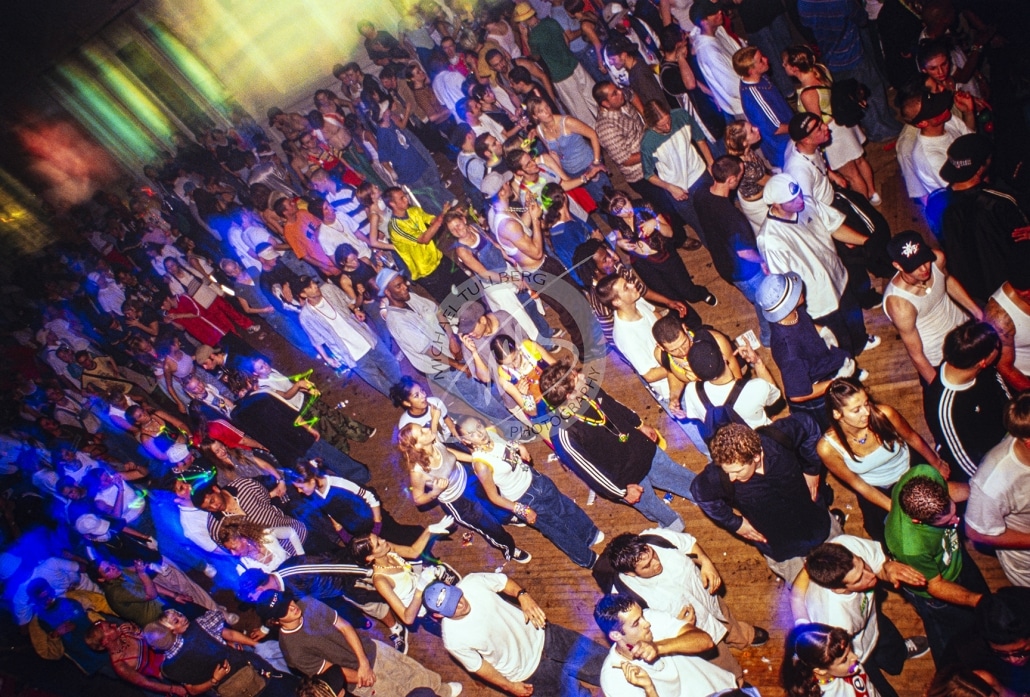 Atmosphere shot at the “OZ” rave at the Alexandria Hotel in Los Angeles, CA on November 22, 1997.

One of the prime destinations in DTLA for ravers in the 90s was the Alexandria Hotel at 5th and Spring. Once a luxury hotel during the 1920s and 30s, The Alexandria lost a great deal of its glitz over the next several decades. By the time the rave scene got hold of the place, it was a flophouse, in an area where nobody really wanted to go, including the police. Thus, it became a safe haven for the music, since events there would rarely be interrupted, and if they were, it was usually due to failures of the building’s ancient electrical system, rather than the cops showing up. In a very real sense, it was a hiding place in plain sight; a perfect metaphor for the rave scene itself. Even though chunks of plaster would fall from the ceiling at times, the fans still flocked to the Alexandria on a regular basis. Today, the building is a hipster hotel and bar, and they don’t really volunteer much information about the place’s days as a rave center for some odd reason. 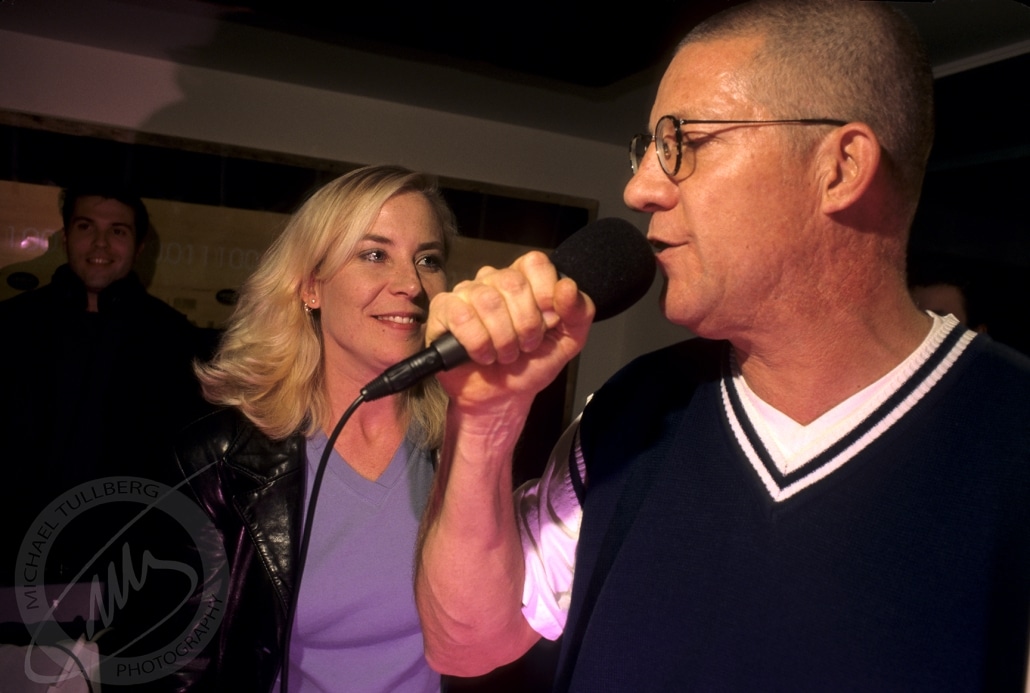 One of the frequently overlooked pioneers of electronic music in Southern California is Swedish Egil, the DJ/producer who started out at KROQ in the 80s, trying to squeeze early electronic music artists in between the likes of Nirvana and the Red Hot Chili Peppers. In the 90s, he founded the first two all-electronic music terrestrial radio stations in the country: MARS-FM and Groove Radio. This photo of Egil and the great Holly Adams was taken at the 2000 launch of GrooveRadio.com, which still runs today. In my humble opinion, Egil occupies a place in electronic music radio history that ranks just as high in importance as Jason Bentley’s long run with Metropolis at KCRW. 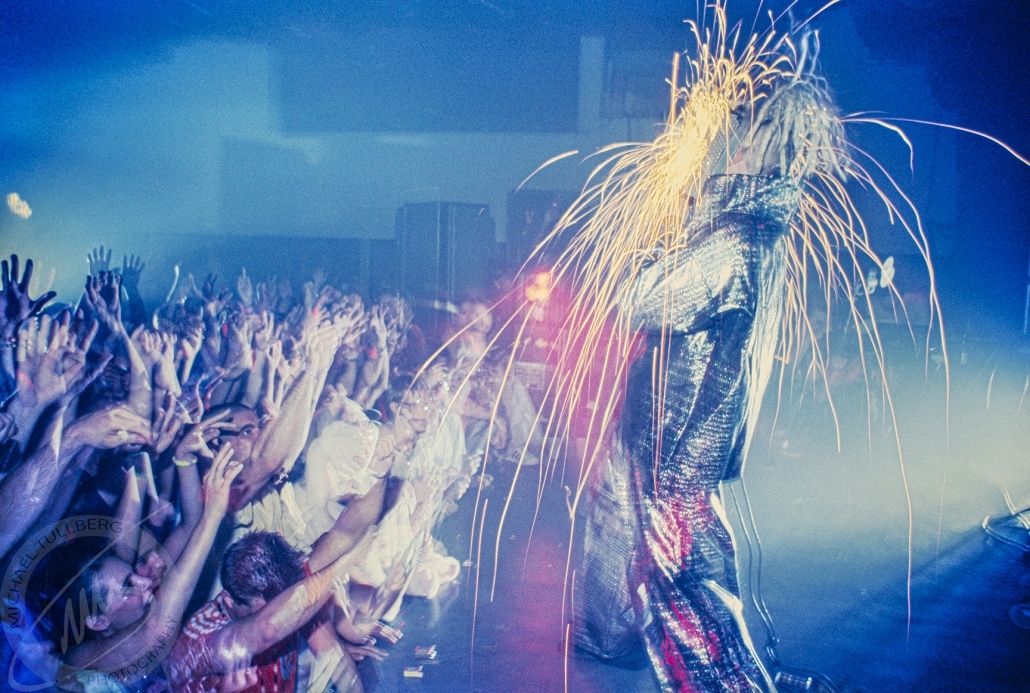 Bunny from Rabbit In The Moon performs at the Magic Wednesdays rave club in Los Angeles, CA

In my book The Raver Stories Project, promoter Jason Jay called Magic Wednesdays the Studio 54 of rave, and in a sense, he wasn’t that far off. MW was one of the few clubs in very mainstream Hollywood that regularly featured rave-quality artists, and for a number of years, it did actually fill at least one role similar to that of Steve Rubell’s NYC landmark pleasure palace. This was it being a major center for dance music and introducing it to a mass media audience. Though MW never produced a 90’s equivalent of Saturday Night Fever, it became the central place for Hollywood entertainment industry people to go and discover rave music, in a comfortable, non-rave setting they could understand. Not coincidentally, these people soon began inserting the music in commercials, marketing campaigns, TV shows, and film soundtracks. 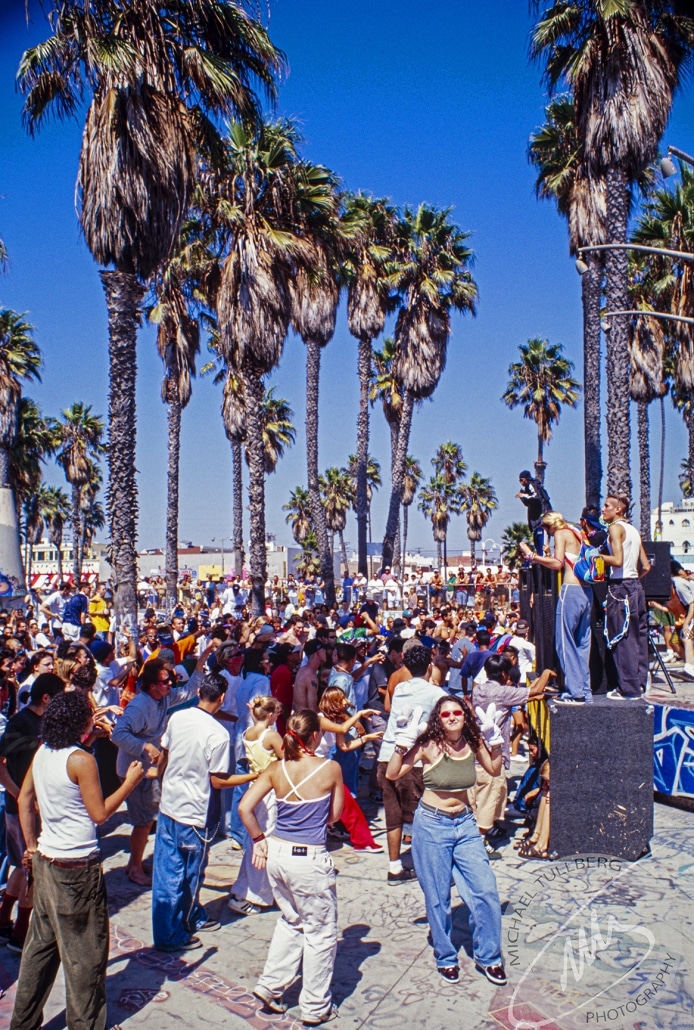 Atmosphere shot at a free daylight rave on the Boardwalk at Venice Beach, CA on September 6, 1997

The Venice Beach raves of the late 90s were a lot of fun. They took place in the old, crumbling amphitheater space on the Boardwalk, (which now holds the skate park), in broad daylight in front of all the thousands of people who’d be strolling by. The gigs were usually canned food drives or something similar, which I guess made it easier for the promoters to get the permits for the parties. Usually what would happen was, several hundred ravers would show up to dance, while a number of amazed tourists would line the chain-link fence on the perimeter, and stare wide-eyed at the ravers. No doubt more than a few became convinced of the impending end of civilization as a result. Only in California. 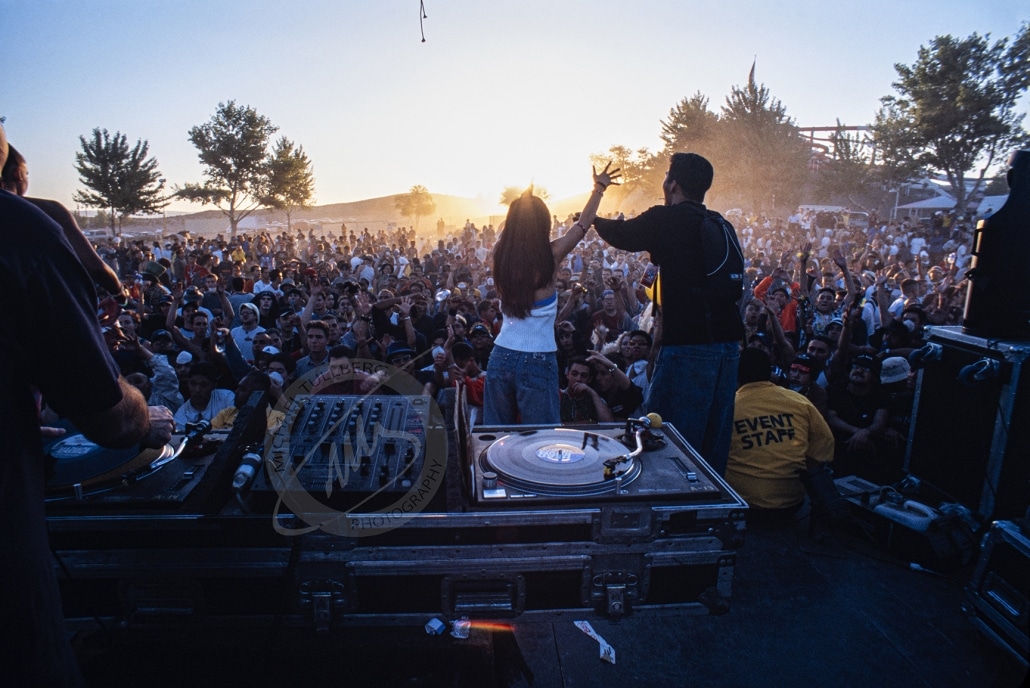 This is from the third edition of Electric Daisy Carnival, in 1999 at the old Lake Dolores water park. Dawn is breaking on the thousands who’ve made it through the night, and as you can see from my stage vantage point, the numbers aren’t anywhere near what EDC draws today in Vegas. Yes, the party has come a long way since its underground beginnings, and this is just when it’s beginning to poke its head out of the water, so to speak. Up until this point, EDC had been just another mid-sized party among many others on the SoCal rave circuit at the time. Afterward, it would always rank at the top of the Massive pyramid, “massive” being the term used at the time to categorize these rapidly growing and evolving proto-festivals. It was one of the things that made SoCal the crucial center for American raving culture in the 90s. And, Pasquale Rotella’s real journey was just beginning. 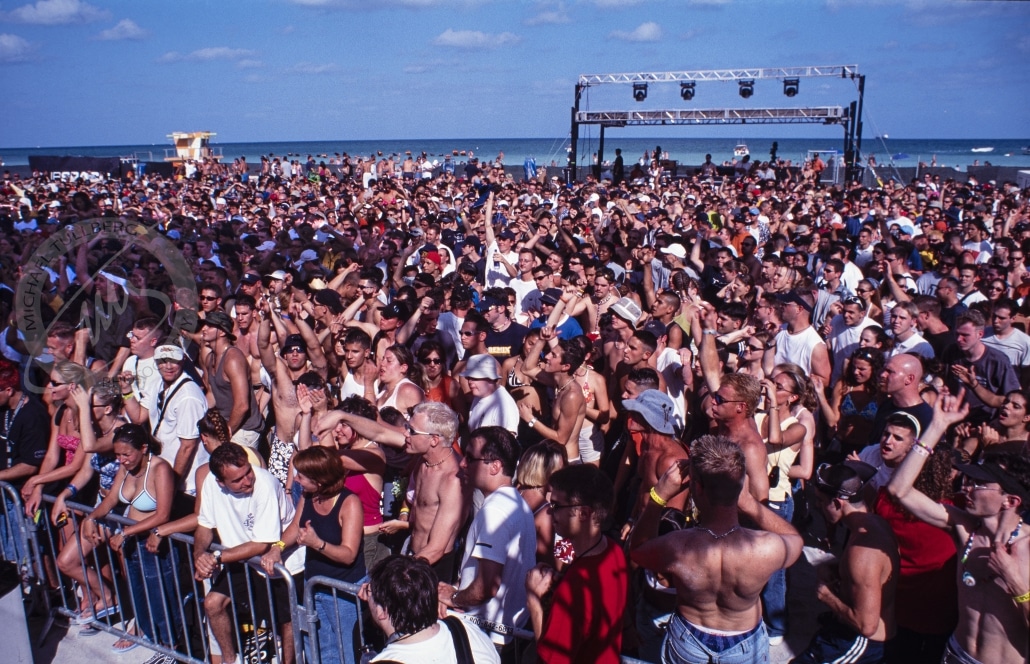 at Winter Music Conference in Miami, FL on March (day)(year)

I think we’re seeing a theme here: that 1999 was an amazing year for electronic music in America! And this was yet another reason when the Ultra Music Festival launched itself on the sands of Miami’s South Beach. Up until this point, Winter Music Conference had been the main rave music attraction in Miami every March. Now, this new festival threatened to change everything…and in fact, that’s exactly what it did. Ultra would grow in size and influence so that eventually it and Insomniac would go head to head in the worldwide EDM festival wars in the ‘00s and ‘10s.  It would also pull even with WMC as the primary electronic music attraction in town. 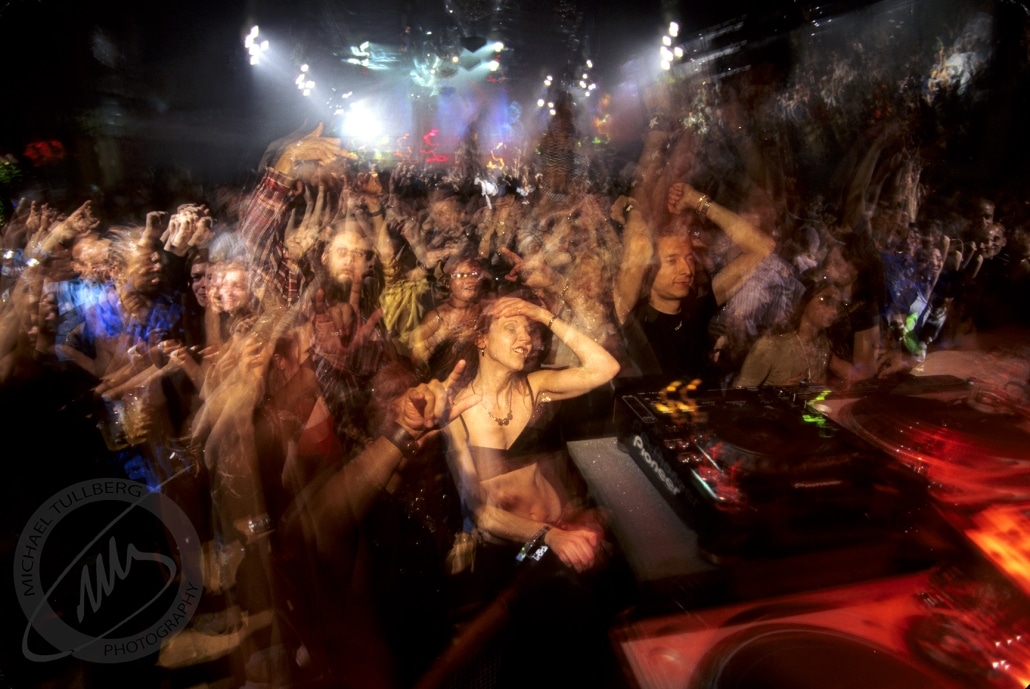 This is from the superclub that ended up helping bring about the end of the Second Wave of the rave scene in L.A. in the early 2000s. Initially at its founding venue at Circus Disco, and then later in its longtime home at Avalon, Giant was the first big club in the city to feature major rave artists as headliners. As such, it demonstrated to the long-intransient other clubs who’d refused to let rave music within their walls that yes, they actually could make money off this genre. Suddenly, venues across L.A. began following Giant’s lead, and it was only a matter of time before the rave scene became less important as a music outlet, as the music finally had acquired the centralized Hollywood clubbing presence that it should have had from the very beginning.