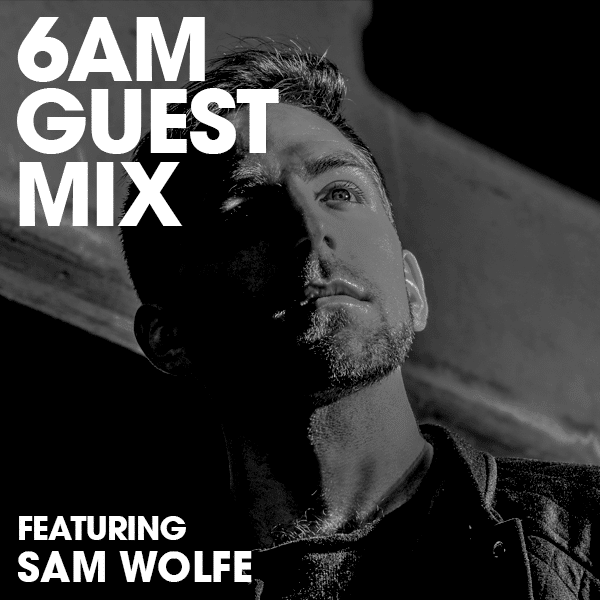 This week’s Guest Mix features Sam Wolfe, one of Atlanta’s emerging music forces. He sat down with 6AM to share his thoughts about the past year and upcoming plans. Included in this interview are artists Sam hopes to see prosper in the next year, some inspirations, and advice for aspiring artists.

Hi Sam, thanks for taking the time to chat with 6AM. 2020 was a hard year for launching a career, but you still managed to make quite the impression. What were the hardest parts of maneuvering that during this time?

Honestly the hardest part for me was watching so much pain, suffering and division all around the world and not letting it get me upset and distracted from making the music which is what I love to do.

What got you into electronic music? Was there an influential artist who really grabbed your attention?

So many artists across a ton of genres I could name, but the big grab for me was all the crazy nights clubbing for the first time. In Baltimore, we had a spot in high school we would go to called Bourbon Street where a lot of the now famous bass music acts first played. I remember Drinking Four Lokos when they had still had caffeine. Those were the best renegade parties, and once you feel the power that good electronic music can do on a proper system, I think there is no going back.

This new release on 1605 is a collaboration with Rebel Boy. How did that relationship begin?

It’s a cool story. I was looking for a teacher to help take my producing skills to the next level and a mutual friend here in Atlanta introduced me to Rebel Boy. Rebel Boy has a long history in dance music producing trance under his name Johnny Yono with tracks on Armada and professionally mixing for artists like Moby.

We spent a year straight working together, and during that time I spent more time talking to Johnny than anyone else. All of a sudden after that year we realized without even meaning to, we had created this seamless workflow where we were producing some really cool sounding stuff together. The Senso opportunity came up, and we made “Adrenaline Machine” which has been a huge success, and then got Umek’s attention with our latest track which was a really cool nod that we’re onto something.

One piece of advice I would give to all producers out there, find yourself a mentor because Johnny was the key to teach and give me the confidence to launch my techno project and produce music under my actual name. Since then we’ve become really good friends and finally just got to meet in person (after working together for 2 years) for his Atlanta show. I consider myself very fortunate to have found someone I can work with so well, and am excited for the world to hear what we put out together in the future.

We all have our inner critics, those little voices sometimes aren’t the nicest. How do you stay motivated when you’re not feeling so hot?

I like connecting with and talking to other artists out there. One thing I’ve noticed is just like you’re saying we all have our inner critics. Everyone goes through the same problems of doubting themselves; loving something they made and then hating it the next day; feeling lost and stagnant… so many different things.

So my advice to anyone reading this, is that when I feel the same way I take a step back and realize every single other producer goes through the same feelings. I acknowledge that it’s normal, take my subjective emotion out of it, reset and move on. Put your music down for a day, a week, a month, work on a new project and come back to it later.

I feel like the difference between the goods and the greats are how we handle setbacks and rejection. The greats are able to immediately bounce back and let things that might tailspin someone else into a weeklong bout of depression, affect them for maybe 5-10 minutes and move on. So I’m always cognizant of staying focused and not letting myself get distracted from all the highs and lows that come in this industry.

Speaking of motivation, you’ve gained some nice momentum this past year and a half, and with more eyes on you, who would you be most excited to collaborate with?

One of my favorite parts about producing is meeting all of the really talented but lesser-known guys around the world making dope music…. So I hope to collab with a bunch of those friends. Mauro Somm, everyone should check out his tracks Groove Reader and Used For the Bounce, he does a really nice job making fun to dance to, groovy stuff.

My other buddy Tayyar, his track “Breathe In” feels like it was meant to be played in a giant warehouse coliseum, and his new unreleased stuff sounds very epic and powerful. Then of course my brother in Lebanon, Kreecher, our track “Lebanon” is one of my favorites, and we need a cool follow-up.

Also I have two other friends I’ve recently become close with everyone should know about, Bruce Zalcer and Karim AlKhayat. Both these guys are making hard-hitting, driving, fun to DJ tunes, and think a collab between us could sound dope.

What’s in this mix you made for us? Anything that you feel like sharing?

A bunch of new and unreleased stuff from my buddies — and a whole bunch of 1605 material, I’ve been liking a lot of what Umek has been doing lately.

What are you most excited about in the year to come?

It seems like shows outside of Atlanta are starting to become a reality; so I’m excited about the world opening back up and showing everyone how we party in ATL. I’ll be in Austin during the Seismic Dance Event playing some pop up parties, and headlining a festival in South Carolina June 11 put on by Re:Think Techno and Pangea Productions.

On top of that, I started working with a creative agency, who I met while partying in Tulum and they have helped develop a really cool 3-5 year plan for me, starting with my new branding that’s a perfect fit for the story I am trying to tell with my music. Figuring out how to tell your story to your fans is almost just as important as the music, so I’m very excited about this new chapter we’ve launched.

Do you have any upcoming releases that you’d like to highlight?

Obviously we are very pumped about Black Veins April 23 (via 1605) I have a good feeling the track will do well based on initial feedback. On a different note,  in a style I’m probably not going to make for a long time — I have “Reservoir” which is a deeper more progressive collab with my brother JD Farrell here in Atlanta.

It’s really special and unique for me, because Nora En Pure has always been such good inspiration on how to layer emotion into a song, (anyone looking to do that should take note). So landing this track on her label is a very cool nod and accolade  from another producer you look up to and I’m very excited for everyone to hear what JD has up next.

If there’s one thing you could share with artists newer to the scene, what would it be?

When I first started listening to EDM, I remember that song Toulouse by Nicky Romero and thinking that modern talking “Yooy” sound was the coolest, most fresh thing in electronic music. I would spend all my time searching for more songs that ripped off that “Yooy”. When I first got into producing, I thought it would be cool if I tried to bring back the “Yooy” and make the modern talking sound cool again…

But one day I realized that as as producer you should always be aiming to be the guy that creates the “Yooy” i.e. the sound other people want to rip off. As you’re making music try to be more focussed not so much on what others are doing in your genre…. But rather what others aren’t doing– that you can do to be different. The producers that try to be different in their own unique way will always stand out from the copycats, even if your technical skills aren’t the greatest. So figure out how to make your own “Yooy” and be comfortable being different. I think that’s how the coolest new music gets created.

On top of that make sure you create your team of people that push you to keep going when you want to give up or get lazy. Always remember at the end of the day making music is meant to be fun and a release – it’s  something you love, so if you’re in a position where you don’t need to make music for the money. Appreciate and be grateful for that and try to keep it that way as long as possible.

If you got any value from this article and want to help support, grab a copy of “Black Veins” on Beatport and help us climb the charts.

Also I’ve been thinking about starting a YouTube channel and making quick tutorial videos on production tricks I think are cool and helpful. So if you’re reading this and think that would be helpful to you, come send me a message on Instagram and it will probably motivate me to get the channel made faster.

Lastly, I like to consider myself an open book and I answer all my Instagram DM’s so if you have any questions about production or want feedback on a track, feel free to hit me up and I’ll make sure to respond.