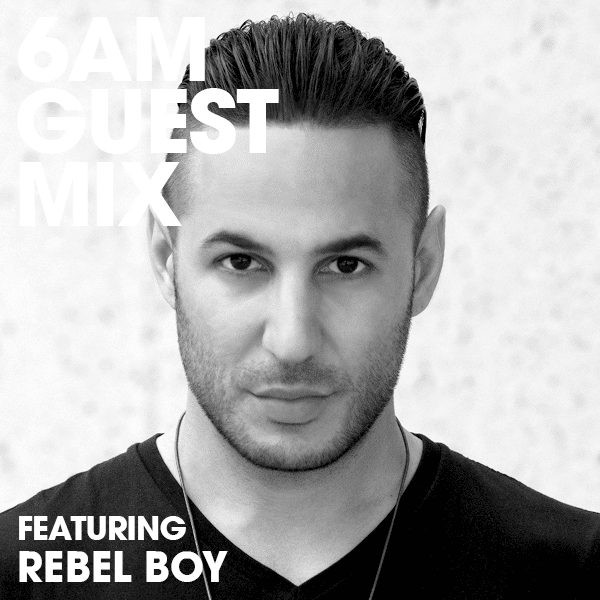 Los Angeles-based artist Rebel Boy provides this week’s 6AM Guest Mix full of exceptional tracks from techno favorites such as Brennen Grey, Sian, and Layton Giordani plus original tracks and IDs. Even though Rebel Boy, real name Johnny Yono, currently lives in LA, he was born and bred in Detroit. As a former trance producer originally from the birthplace of techno, Rebel Boy has all the makings to provide listeners with a classic techno sound.

Blending massive, unrelenting energy with deep and mystifying atmospherics, Rebel Boy quickly gained the attention of Frankyeffe at Riot Recordings. Included with his debut EP release was the breakout bomb, ‘Cerebral Mass’ which immediately caught the attention of the techno community amassing major support from industry giants such as UMEK, Spektre, Veerus, OC & Verde and Brennen Grey to name a few. Nearing the end of 2020, he re-emerged on Riot unleashing the mighty ‘Fireheart’ EP which placed him in the Top 5 on Beatport’s Techno chart further establishing himself as a force in which to be reckoned.

Following the ‘Fireheart EP’ came collaborations with both Frankyeffe and Spanish dance heavyweights, The YellowHeads landing him on Oliver Huntemann’s legendary Senso Sounds label with ‘Adrenaline Machine.’ With unparalleled dedication to quality and many exciting projects on the horizon, Rebel Boy is becoming one of Techno’s most celebrated new talents and certainly one to keep on your radar. You can hear more from him on ‘Rebel Boy Radio’, every 3rd Tuesday of the month on DI.FM’s Techno channel.

Hi, and thank you so much for taking the time to chat with 6AM. The world was turned upside down in 2020 but 2021 offers new hope. What is your hope for the new year?

Thank you for having me and I agree 100% with your sentiment about the world. My hope for the new year and in regards to the industry is that I, like everyone else, want normalcy fully restored in our scene. As far as I’ve read, things are looking up in terms of events which seem to be slowly coming back. I actually just had a gig in Atlanta on Easter weekend so things are definitely showing promise and that little light at the end of the tunnel is becoming more and more visible.

Congratulations on recently reaching over 100,000 monthly listeners on Spotify. What career milestone do you hope to achieve in 2021?

Very much appreciated! I actually peaked around 130,000 to be precise haha. Those Spotify editorial playlists are where it’s at! I really haven’t set any goals for 2021 aside from trying to produce as many solid records as I possibly can and to start gigging again on a regular basis.

Tell us a little bit more about yourself. What first got you into music, how long have you been DJing and producing music — what came first?

My musical past actually stems back to being a drummer. I spent about 7 years playing in various hard rock bands before leaving music to pursue an acting career in TV and Film which is what brought me out to Los Angeles in the first place. After working bar gigs for New Year’s Eve events such as Giant Maximus, I was absolutely smitten and completely in awe of this new and mysterious world that had opened up before my eyes. Mind you, I was exposed to proper underground raves back in Detroit which was where I initially fell in love with electronic music but, it wasn’t until after moving to LA that I realized I could actually immerse myself in being on the creative side of the spectrum rather than a spectator. Upon my first experimentations with producing music way back in the early 2000s, I wasn’t doing 4-on-the-floor stuff….I was dabbling a bit in IDM (Intelligent Dance Music) where pioneers such as Aphex Twin reigned over that genre and I was enthralled in every aspect of it, although it was more for personal amusement. In 2007, I started learning how to DJ on vinyl so I devoted a great deal of time at Scratch DJ Academy in West LA which is a school known for turning out Hip Hop DJs. I was the only one in there spinning underground electronic music and at the same time, I began producing.

You are also a former trance producer before transitioning to techno. Does trance still influence your current sound and, if so, how?

Yes, I produced Trance for over a decade before making the switch in 2018. It absolutely influences my current sound to a certain degree and most especially because the “Cosmic Techno” sound is on fire at the moment and is ostensibly infused with Trance.. I am currently experimenting with blending more of a pure Techno sound with a bit of the cosmic style as we are essentially ever-evolving in terms of artistry.

I would say it has yes but, I have also been heavily influenced growing up in Detroit.

You will hear 100 “Nos” before a “Yes” but, building thick skin is part of the process of growth as an artist. Use the rejection you will no doubt receive as fuel to become better. Don’t strive to be good…be fucking great!

Rebel Boy’s advice on starting out as a musician

You prepared a special guest mix for 6AM. What can listeners expect when they press play on the mix?

The listeners can expect a 2-hour unraveling of some of my favorite Techno tracks from even several years back as well as my own releases and some forthcoming/unreleased tunes from myself. I am very proud of this mix so I think everyone will enjoy the ride!

From a producer’s standpoint, trying to convey a story within the music that people can truly feel and relate to has always been a goal with every track I have produced. I believe if there is a backstory injected into the music, people will be reached on a deeper level and I also mean this as well as being a fan. A track is so much more alluring when there is a clear and evident story. I want to be captivated!

From when you first started to now, what has been one of your greatest lessons?

Stay true to your own self creatively and don’t be swayed by the tastes of others telling you how your art should sound. Stick to what you love… just do you and you’ll eventually see the positives come to you. This industry has certainly taught me to exercise patience. It has also taught me not to expect anything from anyone.

What advice would you give someone who is just starting out (a year or less)?

Find something else to do in life —  haha just kidding! Stay true to your own self as a creator. I know that’s so fucking cliche and something that has been reiterated for a long time but, it truly is sound advice. You will hear 100 “No”’s before a “Yes” but, building thick skin is part of the process of growth as an artist. Use the rejection you will no doubt receive as fuel to become better. Don’t strive to be good… be fucking great!

Yes, I am also a mix engineer and worked on a small handful of tracks from Moby’s latest album, ‘All Visible Objects’ released in 2020 which was an absolutely incredible experience being involved with an artist of that caliber. I have a business teaching/mentoring upcoming producers on a 1-on-1 basis and helping them tighten up their game. Also, look out for forthcoming tracks later this year on 1605 and Respekt Recordings. You can keep up with my sets by tuning in to my show, ‘Rebel Boy Radio’ on DI.FM’s Techno Channel every 3rd Tuesday of the month.