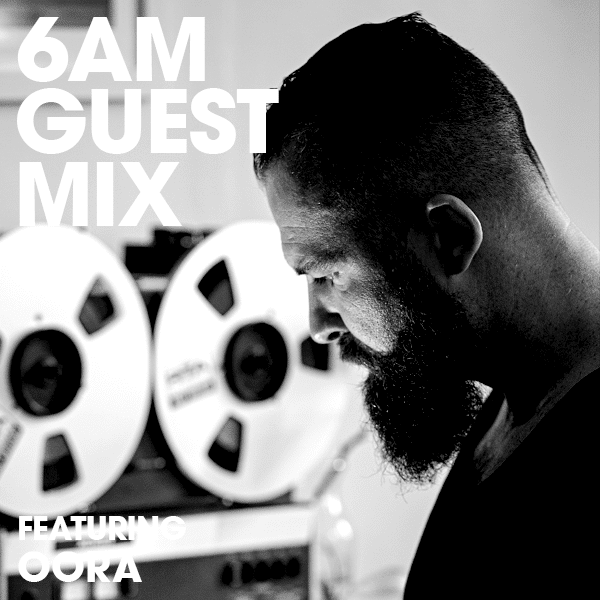 We close our week with an exclusive Guest Mix from Oora, comprised wholly of his own originals as well as two remixes of his tracks by Nadia Struiwigh and ASC.

Oora, comprised of the solo artist Federico Chiesa, is a church of analog sequencing. Using vintage analog synths, all the recordings are made from single takes without any post-editing. The music is heavily based on the sounds of the iconic Roland TB-303 and TR-808, ranging from dub acid to deep minimal techno.

Chiesa began electronic music production after being a long time guitarist and singer with bands such as Mr. Bison, and Grace and Doom. Chiesa is now focusing on electronic with a live recording approach, limiting himself with the use of selected analog synths and old school workflow to retain the imperfect power and simplicity of the human performance. He recently launched the @metamorphnyc imprint, on which you can find his most recent artist output.

Oora’s “Memoria” EP came out in August as a soundtrack for Allocation, a story written by Jack Follman specifically for this release. Drawing inspiration from the album and narrative written by Oora: both the story and music takes listeners on a sonic journey that you can also visualize.

Enjoy this week’s Guest Mix from Oora as well as our exclusive interview with him below.

Full tracklisting for 6AM Guest Mix: Oora is at the end of the article.

Hi Federico, thanks for chatting to us today and thank you for the mix! Can you tell us a little bit about when and where you put it together and what your mood was during the process?

Thanks for having me! I worked on this mix during last month, putting together my two musical interests: ambient music and dubtechno. I decided to use only tracks I produced, plus two remixes.
The general vibe of my tracks alternate between the relaxing minimal ambient mood and darker, hypnotic dub acid.

How many of your own productions can we find in it?

All of them except the two amazing remixes that Nadia Struiwigh and ASC did.

What do you hope the mix communicates to listeners?

I want to take the listeners on a journey. I often relate my live performances/mixes to a film, where I build up tension until a final release.
The mix start with a long mellow ambient section that introduces to the central dubtechno part.

Your Oora project is described as “church of analog sequencing.” What does that mean exactly?

My approach to composing is strictly analog. I use only hardware synths and I cherish the performance over the production in a computer. All my tracks are single takes. I prepare all the sequences (the different musical parts including drums, bass lines, and synths) and then improvise and create an arrangement. My music sometimes is imperfect and simple, but I believe this workflow is my most honest representation.

It’s been an interesting year for artists. How did you cope through the lockdown months?

Being that the recording/creating process of music is my favorite part, I have to say that the lockdown allowed me to focus on it in a better way. I ended up with a great daily routine and a lot more music. I released two albums during the summer and another one is coming up in November. Music really helped me stay grounded.

Were you more or less productive in the studio than before?

Way more productive. I fall into the category of a person that suffers from FOMO (fear of missing out), so once I realized that forced confinement relieved me of my anxiety of social outing my creativity bloomed.

I saw on Instagram that you swear by the Model 1 mixer. How different is it to you compared to the Xone or Pioneer?

To be clear, I never used the Model1 for DJ purposes, but only on a production standpoint. I wanted an analog mixer with an amazing sound and a good performance layout. Once I tried it I completely fell in love. It’s a great tool to shape your sound and have hands-on control in a clear and straightforward way. I’m sure DJing with it would be a pleasure, maybe in the future I will finally learn!

What other pieces of hardware do you swear by?

My signature sound comes from the Roland TB303. It’s a small vintage box mostly used in Acid music, but I found it beautiful in my dubby tracks. I also love my TR808 for drum duties, a classic.
Lately, I’m producing more ambient and I collected a lot of experimental synths (Monome NORNS is one of my favorites). I like to record long sessions where I just randomly pair synths and effects to create interesting sounds.

Congrats on your recent Memoria release. What inspired that EP, any particular memories?

Thanks! The concept of the album comes from childhood memories. When Stephen from Metamorph (the label that released Memoria) contacted me for a collaboration I though the idea of building a sort of slow techno album with melancholic vibes would match their aesthetic.

I started from my memories of my nights playing the Amiga in my basement as a kid, and the tracks somehow followed up organically. I usually need some kind of fascination when I start a new project. I feel it makes the process more focused.

I meant to ask, you’re a classically trained musician before you became an electronic music producer. How much does your classical training influence your current productions?

Not classically, but I played a lot of guitars and toured with bands since teenage years. I mostly have been in hard rock/metal bands and somehow I feel that my approach to electronic music has been influenced by that. There are a lot of ex metal musicians in techno music. I guess it can be an organic evolution. I still approach the building of a track as I would do with a rock one: I like having a drum, a bass, a pad (doing guitar parts) and a lead that would be the voice. That’s probably why my compositions don’t have too many instruments. I like simplicity.

Do you have any other releases in the pipeline for 2021?

I’m releasing a minimal electronic music cassette in November called “Una Storia Breve” (out from Wow and Flutter), and I’m finishing an ambisonic dub-techno album that I’m really excited about. It should be out early next year.

What other projects are you working on?

I am working on scoring films and games. It’s a new field for me but I’m already getting interesting results. I’d like to be more consistent on that side. I love matching visuals and music.

You are Italian so I will assume your favorite food is Italian. Am I correct?

You can bet on that.

What is your favorite dish then?

Pizza! but also I love cooking any pasta dish. I worked in restaurants for a little while, food is another big passion of mine, and my wife really appreciates my cooking skills.

Italy is a beautiful country and so diverse. What is the most beautiful city or part in your opinion?

I’m from Tuscany, and I really love it out there. Small medieval towns on beautiful hills, can’t beat it. Have a look in San Gimignano and you will understand. But I also love Sardegna, is a beautiful island with the most amazing seascapes and food.