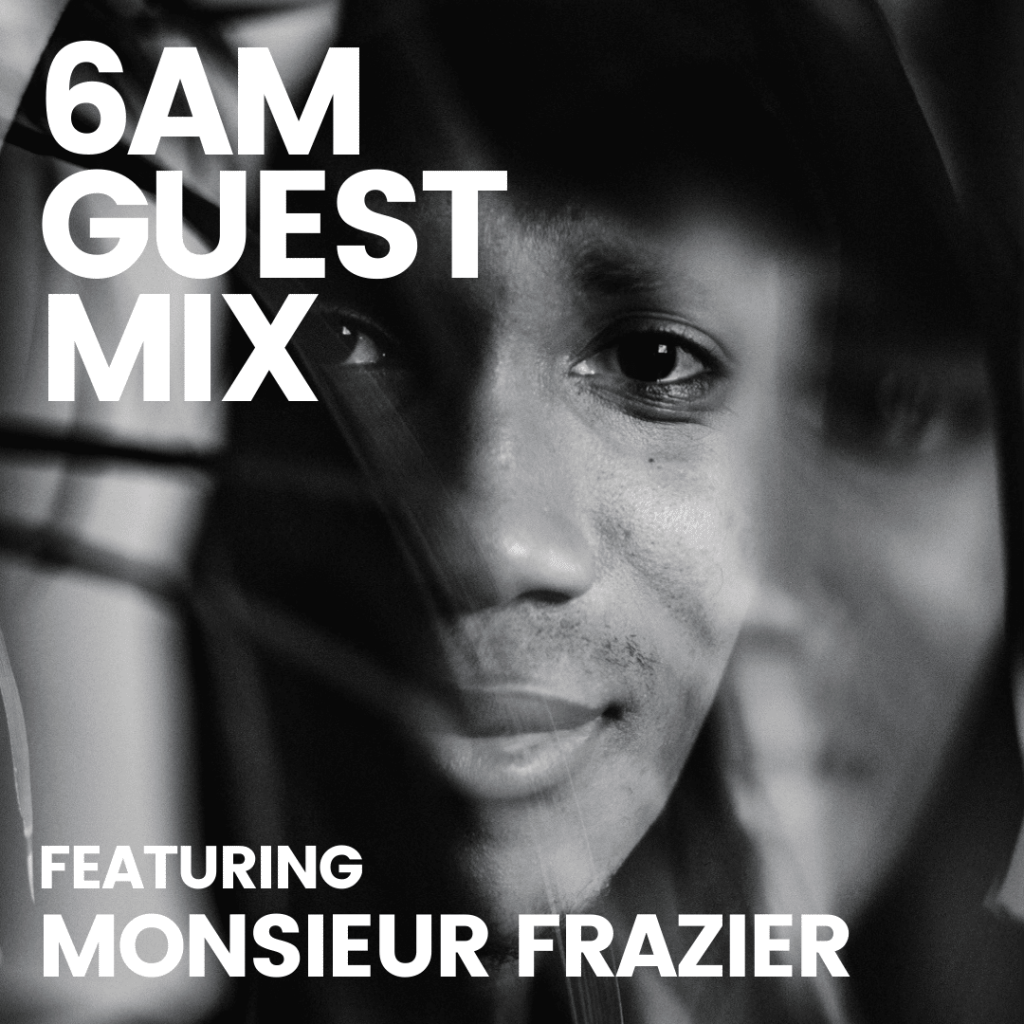 This week’s 6AM Guest Mix features a DJ and producer whose sound is deliciously versatile, dynamic, and dance-inducing. As a co-founder of the Los Angeles-based record label, event production brand, and creative collective, Understated and Understated Recordings, Monsieur Frazier has climbed through the ranks of the LA underground scene with his unique blend of musical stylings. Frazier is a curator in every sense of the word, and his influences when it comes to dance music are second to none.

A veteran of the LA club scene, Frazier held down a year long DJ residency at the seminal Sound Nightclub, as well as graced the decks at many of the city’s best venues. In 2018 Frazier made the leap from club to festival stage, making appearances at Splash House, Coachella, Minimal Effort, and more. Frazier released his first remix in December 2020 for Miami based duo boiish and Mike Antix on acclaimed U.K. label HE.SHE.THEY. The remix has garnered support from his peers as well as global DJ’s such as Lee Burridge where it has become a staple in his recent sets. You can also listen to his latest EP, Monsieur Frazier EP, on every major streaming platform.

You can listen to Monsieur Frazier EP here.

More recently, Frazier has adjusted quickly to the new landscape of live-streaming, most notably being tapped to play sets on local hero Justin Jay’s weekly livestream show Justin Jay’s Mystery Box which is hosted on the legendary Dirtybird Records Twitch channel, as well as a coveted Friday night slot on the wildly popular Desert Hearts Twitch channel that sees hundreds of thousands of viewers tune in every week. It saw Frazier play a 3 hour set to a peak viewership of 18,000+ viewers and 855,000+ total viewers. Frazier’s set remains one of the most popular and highly watched on the channel and has garnered high praise, in addition to introducing him to a new audience around the world.

“I wanted to create something ethereal for the listener to get lost in, but still keep it funky, bouncy, and highly danceable.”

On his 6AM Guest Mix

6AM · 6AM Guest Mix: Monsieur Frazier

Frazier shares his inspiration behind this week’s 6AM Guest Mix: “The idea behind this mix was to completely showcase the full range of who I am as an artist, a producer, and most importantly as a DJ. I wanted to have every single genre that I play show up, and be represented and highlighted in this mix. Deep House, melodic house, electro, techno, breaks, disco, U.K. Garage, Bass, and broken beat are all accounted for in this mix. Sonically, the mix starts off at chill 120 bpm and ends at a speedy 136 bpm. There is also a distinct nocturnal vibe to this mix. I wanted to incorporate the feeling of the seasons changing here as well, with the weather getting cooler, and the days getting longer and darker. I also really wanted the feeling of being taken on a journey with this mix, and I wanted to create something ethereal for the listener to get lost in, but still keep it funky, bouncy, and highly danceable. I’m extremely proud of this mix, and it’s definitely one of my favorites and most artistic mixes I’ve ever made.”

Through his unwavering passion for the traditionalist sounds spanning Chicago and New York House, Detroit Techno and UK Garage, along with a heavy influence Funk, Hip Hop, Soul, R&B, Jazz and Disco, it’s safe to say Frazier has figured out a winning formula that’s earned him the overwhelming support of his contemporaries and peers alike. It won’t be long before the rest of the listening world truly begins to take notice.