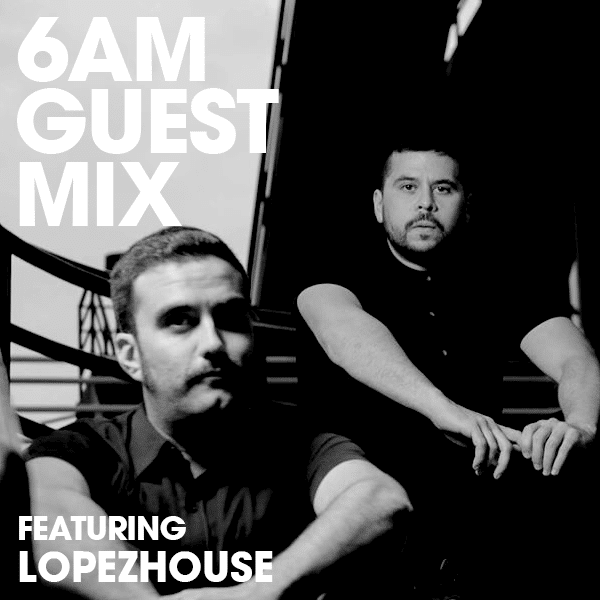 For the past ten years, David López and Carlos Cruz, together known as Lopezhouse, have been carving a path for themselves in the progressive house and techno scene.

After a slew of solid underground releases, the duo broke onto the international scene following 2015’s single “Mude Tod”, released on prolific dance label Dirtybird. Since then, the duo have gone from strength to strength, teaming up with Berlin-based Exploited for several releases, and catching the attention of scene legend John Digweed, subsequently releasing on his label Bedrock.

Listen to their exclusive 6AM Guest Mix below.

Lopezhouse has steadily been gaining respect in the music industry since they first debuted their “Mude Tod” EP in 2015 on Claude VonStroke’s infamous label, Dirtybird Records. This was the start of what is turning out to be a promising career for this humble Spanish duo. Next round of success’s include featured EP’s on both the German label Kittball Records, who edited their enigmatic “Murnau, and “Crosses and Angels” launched by Guy Mantzur´s Plattenback Records. This last track was selected to be in Tomorrowland’s 2016 CD compilation, and John Digweed’s live album Output NY. The duo also had the opportunity to play Belgiu’s mega festival 2016.

The ninth edition of Four to the Floor, the very successful series of compilations from the indispensable and always influential Diynamic Records, includes Lopezhouse´s “Dark Place”. This compilation contains those tracks that the label’s founder and essential figure in the electronic industry Solomun personally chooses with regard to their nature of breaking dance floors. Once again Lopezhouse has become one of the few Spanish artists capable of achieving this! These last years have been the most prolific in Lopezhouse´s career in respect of their work inside and outside the studio.

In 2017 another bomb EP was dropped on John Digweed’s Bedrock Records titled “November Clouds”. Followed by a flurry of prolific works in 2018 starting with their “Barred Out” Ep on Sincopat featuring Sascha Robotti, and their “Motorik” EP on Suara Music that featured a remix by Sascha Funke and was selected by John Digweed and Sasha as one of the top 10 tracks of the year! Last but not least, the duo’s highly praised “Arratsaldean” EP which featured a masterful remix by the techno anarchist himself, Dave Clarke. Needless to say Lopezhouse is a production team surely to keep up with in 2019.