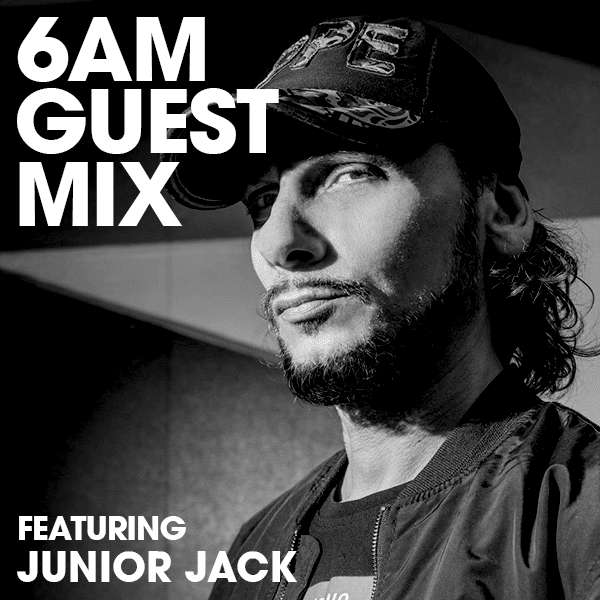 Responsible for some of the best House records of the early 2000s, including ‘My Feeling’, ‘E Samba’, ‘Dare Me (Stupidisco)’ and ‘Da Hype’, all of which all went Top 40 in the UK, Junior Jack is undeniably one of the most prolific house music mixers of that magical era and the man that brought us the chart-topping disco classic ‘Make Luv’ by his alter ego Room 5.

As a DJ, he dominated dance floors relentlessly across the globe, including his residency at Pacha in Ibiza, where he really came into his own as the master of his own sound for Defected.

Here, he provides an exclusive Guest Mix for 6AM featuring some of his favorite tracks from 2019.

Born Vito Lucente in Italy, Junio Jack resided in Belgium in his teen years. In 1995, he abandoned Eurodance and adopted the name “Mr. Jack” (which would later morph into Junior Jack), dabbling in house music. He entered the UK Top 40 with the singles “My Feeling”, “Thrill Me (Such A Thrill)”, “E Samba”, “Dare Me (Stupidisco)” and “Da Hype”, the latter featuring vocals by Robert Smith from The Cure and uses samples from “I’m So Hot For You” by Bobby Orlando. His album Trust It was released to critical acclaim.[citation needed] “My Feeling” and “Stupidisco” were built around vocal samples from, respectively, “Saturday Love” by Alexander O’Neal and Cherrelle, and “Dare Me” by The Pointer Sisters. His latest single was a remake of “Dare Me (Stupidisco)”, with vocals from Shena, which reached #20 in the UK Singles Chart on 25 February 2007

Lucente has also worked with disco artist Oliver Cheatham under the name Room 5, reaching number-one in the UK Singles Chart with the 2003 single “Make Luv”[1] (which used samples from Cheatham’s song “Get Down Saturday Night”).

As a remixer, he has reworked tracks for artists such as Whitney Houston, Moby, Bob Sinclar and Utada. He has worked extensively in this area with partner Kid Creme.