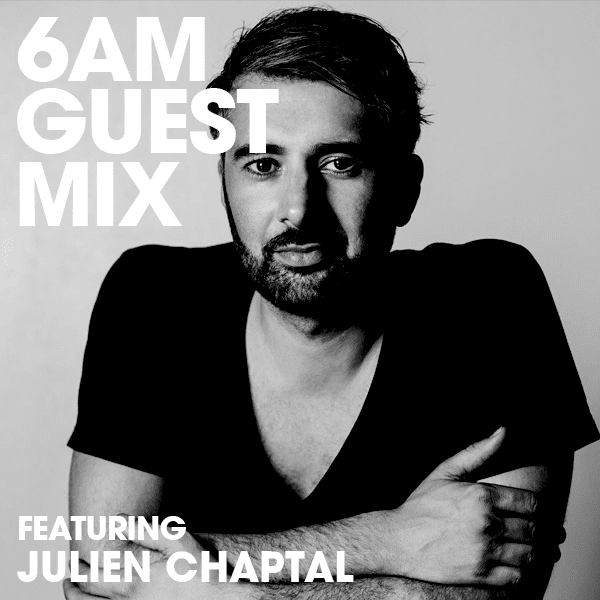 This week’s Guest Mix comes from Julien Chaptal and is a live recording of his set from ADE 2019, when he was invited by Carl Cox to perform at the Awesome Soundwave party at Awakenings

Purpose-built with a modular brain, Julien’s performances are switched on, live, utterly groovy, and while pulsating with machine wiring, undeniably human.

Thanks for the mix mate, really appreciate it. Can you walk us through it, where you put it together, what kind of sounds we can find in it and what you hope listeners feel when going through it?

Well, thanks for inviting me to share music with you! I put this music together on stage while performing at Awakenings at the last edition of ADE. It’s built with a combination of hardware machines and a computer running a few bits of the tracks I released on my latest album. I wanted to share this mix as it is a good representation of the music I’ve been recording and also bits of new ideas that have popped up the past half year or so.

I played quite early in the night and so I saw this set as an opportunity to play some of the deeper music I make at the beginning, and to build to a small selection of tracks from the album towards the more industrial live techno sets that followed on the night. I hope this can take the listeners for a little ride towards a good night out, in any case I hope you feel energised after listening to it!

Any standout tracks we should keep an ear open about?

All of them, of course. I’d love to hear or read comments of people listening to know which ones stand out for them. Most of these are unreleased, I think a few will see the light of day, Let me know which ones should be out there.

Any tracks of your own in here?

Every single track is made by me here, I can’t say I fully own them, some are owned by labels, and now that they are in the ether, everyone owns them right?

You’ve released on many standout labels. What is your best advice to producers looking to get their tracks signed?

That’s a tough question to which there are many cliché answers possible. I guess clichés are there because there is some truth to them though, so I’m gonna go for an advice I read about and didn’t always follow as much as I should have: make music for yourself first and foremost, don’t ever make music which you think certain people want to hear or are going to like, for you will always be one step behind if you don’t.

Talking about releases… your debut album just came out to amazing response. How long had you been working on it?

My debut album actually came out in 2008, it was called Tokens and it was released on a dutch label called Remote Area. I took a little retreat from touring at the time and wrote most of it in my father’s home near Paris in a couple of months. This album took slightly longer! I recorded some of the tracks you can hear on this album in 2011, and I recorded up until the last minute before it went to Mastering last summer. Most of the tracks are recorded live, on stage. I also took several retreats to record some of the other tracks, also live, but on a boat, in the mountains, and everywhere I could bring the box of instruments with me.

It’s entitled “The Way” — what is that in reference to?

The Way is a reference to the way I have been taking on a journey through the dancefloors of the world the past 25 years or so, and to the literal journey I have taken while making this album. A lot of the tracks are a nod to some of the music that has inspired me over the years, but the album is also looking into the future, it is looking into the way I will be taking from now on.

How has the crowd response been when playing the tracks out?

Crowd response is not always the same, but always interesting. Getting feedback on new music is always good to decide on which tracks will make the cut on the album for instance. In the case of this recording, I noticed one of the tracks had an overwhelming amount of bass in one track which I will release on a new label I am putting together with friends. The PA system was huge at the Awakenings event and I could almost see the waves distorting the air. Pants were shaking, but faces froze and bodies stopped moving as the bass kicked in. So I went back to the studio and fixed it.

The release comes on Cox and Coe’s imprint, Awesome Soundwave. What does it mean to you that your music has their support?

It’s an absolute honor of course, to be asked to release an album on the label of a man who’s DJ sets rocked my world when I was growing up! Carl’s a massive inspiration, and working on an album for his label also came with a sense that there would be some expectation as far as the styles of music on the album, but when I spoke with him about it last year he was very open to many different genres, “as long as it feels good”, of course.

You’re French but live in Amsterdam. How do you like living there versus back home?

After 20 years of living in Amsterdam, this is the city I call home. I haven’t lived as long in France as I have in Amsterdam, I between I lived in texas and Montreal. I must say Amsterdam is the place I most like to live for now but I don’t exclude moving on at some point to explore further.

Do you ever miss French food?

Do you go out to party in Amsterdam? If so, where?

Well, yes. I’m spending all my time in the newly rebuilt Doka Studio, for which I’ve also been busy rethinking the acoustics, sound installation, and the DJ booth the past year. I dare say it’s probably the most accurate, and warm audio setup anywhere in the city, and the DJ’s who performed there the past months have all been pretty awesome too. I’m organising an event called The Book Club, which is also the name of the label I am starting, during which we will invite friends who can also perform live to perform with us. We have studios in the basement and the club is located below a hotel so we will be having an artist in residence situation for a week before each event.

What’s your favorite spot in the city?

Tell us something about you we don’t know!

I once drove a car over a cliff and jumped out of it with a parachute, landed in a speedboat and sailed into the sunset. No that’s not true, but 8567 is the code of my credit card.