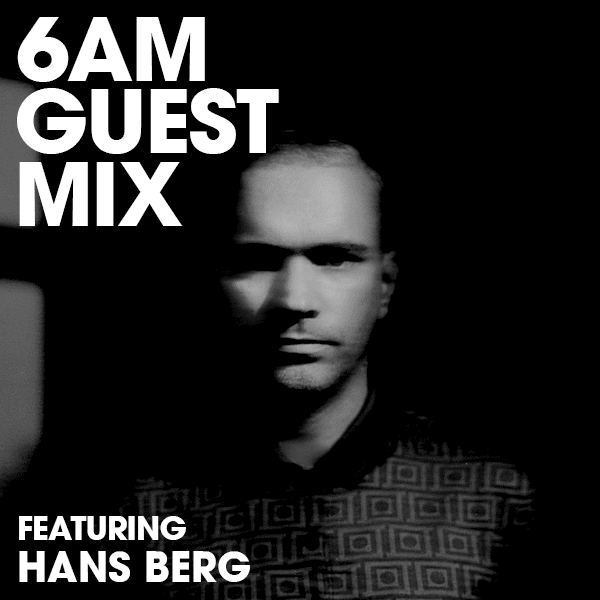 For this week’s 6AM Guest Mix, we present to you a Live set from Hans Berg, which he sent to us alongside the following words:

“When I play live I like to improvise a lot, see where the music and the sounds take me, and I follow that. Every set tends to be quite different, because it’s a search for me, to follow the sounds and see where they lead me.

I use modular synths, modular percussion, analog and digital drums, hardware and software synths, effect pedals, all with Ableton Live as a central hub.” – Hans Berg

If you enjoy this mix by Hans Berg, make sure to share it on SoundCloud!

Playing with hyper-modern synthetic sounds, created from both hardware and software, hypnotically balancing between techno and house, shaping unexpected melodies, it is some of the most organic-inorganic music you will ever hear. His musical language is distinct – it is near impossible not to recognise a Hans Berg production upon hearing it.

For the initial discovery phase of production he very much enjoys the element of letting go of control; in recent projects, just like with this mix, Hans Berg has investigated what happens if he lets the machines (particularly his beloved modular synths) lead the way; finding rewards in the unexpected and unplanned; letting instincts and machinery go off the beaten track; not intervening until the second act, when the raw material is in his hands, when it is time to sculpt and fine-tune his creations.

Hans also runs the label UFO Station Recordings together with fellow Swede Johanna Knutsson, it is a platform for individual productions as well as for their duo Knutsson/Berg. Aside from recently having released two solo EPs on Ian Pooley’s Montage imprint, his debut album, “Dream Maker”, came out on The Vinyl Factory in 2017, followed in 2019 by his second full-length achievement “Sounds of the Forest Forgotten” on 2MR. Conceived between Hans’ studios in the ultra-busy city of Berlin and the remote countryside of Sweden, as the title suggests, it gathers inspiration from human interaction with the wild, highlighting the connection and disconnection between technology and nature.

Since 2004 Hans has been collaborating with Nathalie Djurberg, scoring the Swedish visual artist’s installations and movies. Berg’s compositions extends Djurberg’s work with soundtracks and sonic environments, and their work has been shown in numerous solo- and group exhibitions worldwide.