You are here: Home / 6AM Guest Mix: dotdat 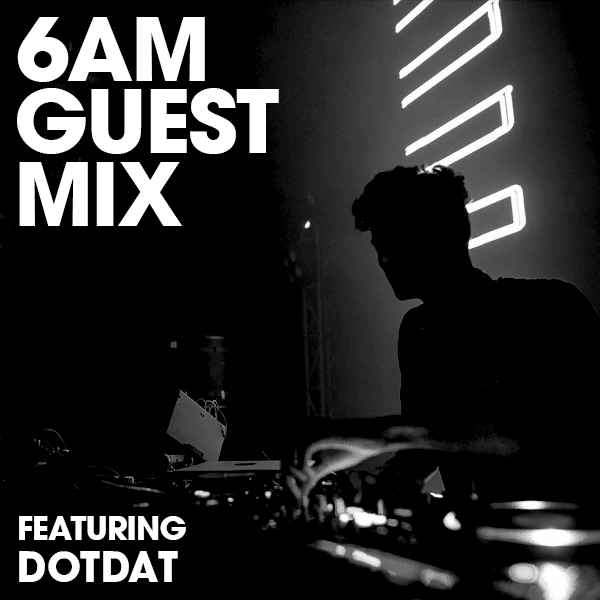 dotdat is a manifestation of the musical philosophy and inspirations that drive the man behind it. With techno at the core of his ambiguous, dark and hypnotic sounds, dotdat explores new dimensions of melody and movement.

A young force to reckon with, his recent release on ODD Recordings has already received major support globally.

Within a short span of an year, he has performed at major international venues such as City Hall:Barcelona, Womb:Tokyo and Club Mago:Nagoya followed by an appearance at Dommune Tokyo. Closer home, he’s brought his unique sound to the Resident Advisor x Magnetic Fields Club Night (Delhi) and an Awakenings Afterparty (VH1 Supersonic, India).

The year started out with a bang as dotdat won Beatport’s ‘Beats in School’ competition, beating out thousands of entries globally. He will now begin a year-long mentorship with celebrated techno label Second State and it’s founders, Pan-Pot.

As he delivers this week Guest Mix, we also took the opportunity to grab a chat to discover more about this young talent from India.

First off, how did you get started into music production and DJ’ing? And when did you know Techno was the music genre path you would follow?

My general interest in music started at a very early age when my Mum forced me into learning the Tabla (An Indian Classical Instrument) and the Drums. This eventually led me to have a keen interest in the technical side of music. I started trying to DJ when I was about 16 years old, around the same time I started dabbling with Logic to try and make my own music. Eventually I studied Audio Engineering at SAE Institute, Sydney, Australia. Only post the degree, did I realise the real potential of audio and what I could do with it.

As for Techno as a sound it was a natural progression, like any another kid I was listening to rock and various other genres until I discovered House music. From House it led to Techno and I haven’t looked back ever since. In 2012 I realised my true love for Techno, India was getting exposed to the sound via our local heroes and being in Australia also opened me up as I was getting to hear tons of DJ’s. Back then I knew it was the sound I wanted to make /play but it took a few years of making my own music and playing a few gigs to really connect with the genre.

What are some of the early challenges of becoming a Techno artist in India? Was it more challenging since this is still considered a more underground (unknown) music genre to the mainstream audience?

One of the most early challenges were not enough venues/people supporting the music. Everyone wanted the mainstream sound, but I was lucky as we already had people like Arjun Vagale carving the path for us, we could always learn from the mistakes the older generation made. But something that still bothers me is the fact that India is so far away from the world and even with the internet sometimes we aren’t taken seriously globally. Locally I was always perceived as an artist who plays really hard music but actually it’s not that hard. That’s changed over the years and it’s definitely more accepted now.

Since the last time we saw you at ADE, it seems a lot has happened between gigs and studio production. What are some of the more memorable moments for you in 2019 so far? and what can we expect between now and the end of the year?

I am really grateful, a lot has happened in a short span of a year. I won the Beatport’s ‘Beats In School’ competition (Representing Second State) at the beginning of the year. I played a show in Berlin mid year which was amazing. The most recent highlight was getting in the studio with Truncate and making some music together along with shooting a documentary on Techno. That was an amazing experience, I’ve looked up to Truncate for years just being able to spend time with him in the studio was surreal. As for the rest of the year I will be playing my ADE debut at De Marktkantine for Pan – Pot’s Second State Showcase which I am really excited for. I’ve also spent a major chunk of the year making tons of music so that should see the light of day soon.

To the Western and EU side of the scene, India doesn’t strike to many as a destination for Techno or Underground Music, but we know that there is a vast scene developing really fast right now in India. How would you explain to the outsiders what the current scope of the scene is like in India?

Honestly speaking, it’s the best it’s ever been, we have more venues, the audience is growing and is open to a wide variety of sounds. Every week we have major local and international artists touring the country. The local festival scene is booming we even have international brands like Awakenings who are hosting stages and the most recent update is that DGTL festival is making it way to India early next year. Some really cool boutique parties and festivals are taking place with amazing line ups too. The scene is flourishing and it’s only getting better, we are going to be at par with the rest of the world real soon.

You have been keeping busy in the studio it seems, what are some of the production tips and tricks you can share with our reader regarding your workflow? Please share any advice you have for other producers to work more efficiently and effectively.

The biggest one though is keep it simple don’t over complicate things.

There’s tons of production tips I could share but the only real advice I could give is Work Hard! Do It Everyday! Believe in yourself and never stop! Don’t let others opinions bother you! Just stay at it! Help your peers and ask for help when needed! these are the things that have worked for me and continue to work for me.

Asides from Arjun Vagale, who are some other Indian artists you feel are producing some really cool stuff that you can share with our audience. We like to get to know other local artists you are supporting and vice versa!

Arjun Vagale is definitely my biggest Influence he has helped my journey as an artist immensely.

Across the spectrum I am really digging what guys like Vridian, Sequel, Midnight Traffic, Sickflip are doing. It’s not the sound that I play but these boys are really hard working and just like me they are hungry.

What tip or advice could you give someone who may recently have taken up the interest to learn electronic music production and DJ’ing?

Work hard, never give up, find something that makes you unique and then work more towards highlighting that uniqueness.