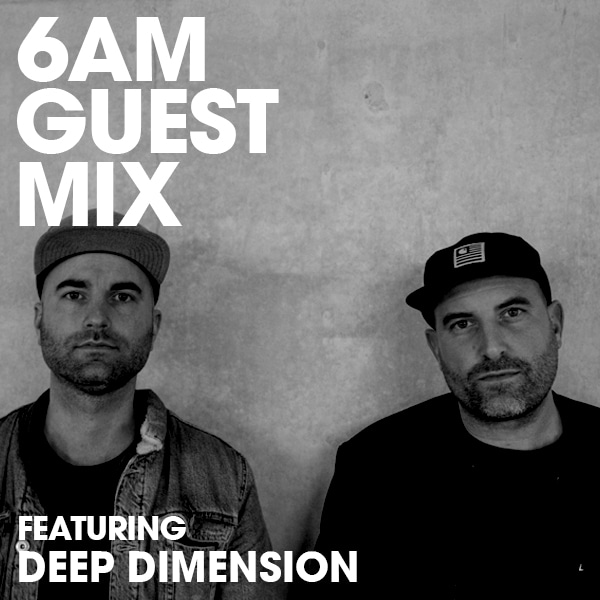 It is safe to say they that are a one-to-watch-duo, as evidenced by their charting tracks released on labels such as Suara and Etruria Beat, on top of the aforementioned Rekids.

They now return to the Radio Slave’s respected imprint with a robust package aimed squarely at the dancefloor, the four-track EP titled Rave Slave, which is scheduled for April 26th release.

We had a chat with the duo ahead of the release and asked them to provide a guest mix exclusively for 6AM listeners.

Thank you for the mix guys! Where and how did you put this together?

We mixed the DJ- set live in the studio of Dennis Hek (Death By Design), Jeffrey’ brother who plays Frenchcore music.

Any stand-out tracks listeners should keep an ear open for?

How did you guys meet?

We met each other when we were little kids at primary school. It should be around 33 years now already.

Wow! Was it immediately a music connection?

Absolutely, we are actively playing music since we were 10 years old.

How did things develop to the point that the Deep Dimension project then began?

We played a few years solo until the point where we wanted more but couldn’t find it in the music we played all those years ago.

We both had a strong connection with techno. With that, it was a simple 1-2-3 and we decided to join forces.

So… you were both solo artists before, and now operate only as a duo, correct?

Yes, that’s correct. However once in a while, we still play solo for befriended people and events for fun

What would you say the benefits and drawbacks are of this?

Our shared vision about our future and music. Besides being Deep Dimension we are also best friends who do fun stuff together and visit each other on a regular basis just for fun. Because we know each other better then anyone there aren’t any mentionable drawbacks.

“Techno.Acid.Rave” are three words I see you use a lot on social media. Would you say they define the sound that you guys produce and play?

Yes, absolutely! Techno. Acid. Rave. is what we stand for. You can feel it on the dancefloor as well as in our communication online

What exciting projects do you guys have going on for 2019?

Well, to start off with our forthcoming release on Rekids. Really looking forward to releasing our second EP Rave Slave on Radio Slave’ label after the success of So 1992. We see Matt as a real inspiration and we are proud to call him our friend. We have some new EPs coming up on on our own label GEN X, Luca Agnelli’s Etruria Beat and on Respekt Recordings, the label of Spektre we will drop a remix as well as an EP… and then there are labels we can’t mention just yet. Besides music production we are in an advanced stage of launching our GEN X clothing.

Tell us something about each other that we don’t know about!

We honestly don’t know! (both laugh)

Oftentimes duos operate on a kind of yin and yang basis, complementing each other in various ways. Do you feel that’s the case with you guys and if so, how?

Yes, we are two peas in a pot on the subject. We are more balanced than a monk in Tibet!

Do you hang out outside of the studio and gigs? If so what kind of things do you both enjoy doing together?

Yes, like we said earlier we hang out together with our families and mutual friends. We don’t miss a birthday party!