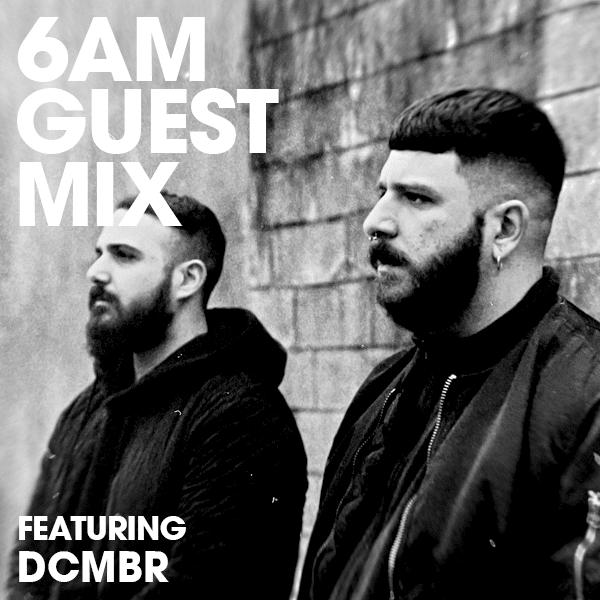 Milanese imprint Kriptika Records have been making strides in the electronic music world, thanks to the A&R and leadership of imprint owners HERMETE and DCMBR.

The first few releases from Rezystor, Stigmatique, Sligo, Julian Muller, Echoes of October, DJ IBON, and both label bosses HERMETE and DCMBR picked up support from genre heavyweights such as Amelie Lens, Marcel Fengler and Regal and continue to keep fans engaged.

Their first VA release, which came out this past April, continues down the path of releasing first-class hard techno with trance elements, industrial and high-energy, warehouse anthems.

Today, they deliver a Guest Mix that underscores their penchant for driving, industrial techno soundscapes. Moreover, DCMBR du sat down with us for a chat where they divulge their thoughts on the Milanese techno scene, the goals with Kriptika Records, and more.

Ciao! Thanks for the mix, it’s banging! What does the mix represent for you at this point of your musical career?

This year is a kind of a new beginning for us, after some years when we stopped producing electronic music.

Two releases on two respectful label, RAW and COUP, gave us awareness about what we want to do and this mix is a huge confirmation of the work we made during this year of forced stop.

Thanks again for this opportunity guys.

Our pleasure. Is this mix a representation of a DCMBR live performance we would see today?

Yes, definitely, this selection is 100% club-oriented.

Even if is more than one year without any gig, we decided together to keep our USB sticks and vinyl collections updated, ready for a possible sudden restart, and this has finally happened.

What are some of your favorite tracks from the release?

“Sweet Coma” by Amstra is our favourite, but of course we are obviously in love with all twelve tracks we chose for the mix. As we told you before, this selection fully represent our idea of current DJ set.

Milano isn’t known as a techno city so much. How did you find your ways to the darker realms of the genre?

Allow us to disagree with you! (laughs)

Electronic music culture is deeply rooted in the city, and especially for the people involved in it. There are some great crews that know how to spread techno.

Who have been your biggest inspirations in terms of techno producers and DJs?

Chris Liebing and Marcel Dettmann as far as DJing goes, especially during the first decade of the 2000s.

Regarding techno production, we can say that Inigo Kennedy and Tim Tama are two of our musical heroes of the last few years.N o one like them expresses our vision of emotional techno.

We briefly mentioned Milan and techno. Can you tell us about the techno scene there?

One word: “Closer.” Closer is our family since 2016 and is, in our opinion, one of the best techno parties in the North of Italy, and not only. It is also born in one of the most evocative location of Milan, “Circolo Masada”.

We can proudly say that we share the decks with some of the most respectful artists of the worldwide techno scene.

Italy, our country, struggled a lot in the past year and a half. I do not want to get political but how did you cope through this time musically and personally?

Unfortunately North of Italy was the most affected area during the first wave of this shitty pandemic. Despite this, and obviously without any gigs, we found more and more time to work in the studio, building up new tracks and studying to improve our musical knowledge.

Kriptika Records is your label, that you run with HERMETE. When did you launch the label and what is your objective with it?

Our common goal was, is, and will be to share our idea of electronic music, as you can see from our label’s Bandcamp page, without any prejudice of musical genre or subgenre.

Our catalogue goes from downtempo to techno, and from hard techno to trance.

Join us to say hi to HERMETE, love for him and his dope sound.

Who do you hope to sign up on Kriptika some day?

Tim Tama, Julian Muller, MRD, Hadone, Narciss and Klangkuenstler are our favorite producers at the moment. Julian already gave us his outstanding contribution,remixing Sligo for KK002.

Hello Julian, if you are reading this!

What releases do you have planned as DCMBR in the rest of the year?

Two releases left for this year, one on Carbone rec. during summer, and one during the third quarter of the year on our label Kriptika.

What is your favorite restaurant in Milano?

Ristorante “Al Garghet” into the south-west suburbs of Milan.

Daniele: I’m a big fan of Atalanta, the real “nerazzurri”.