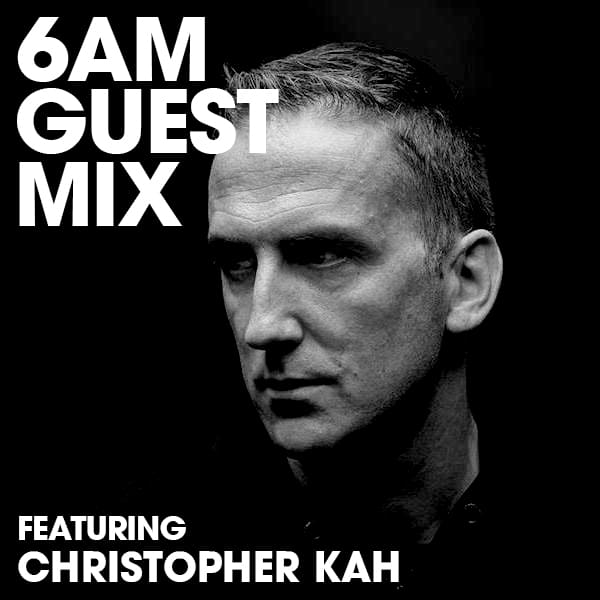 French self-taught, multi-talented multi-instrumentalist Christopher Kah delivers a one-hour 6AM Guest Mix showcasing his expansive take on techno. A truly unique talent, he is also a man for whom the approach is every bit as fundamental as the result.

As notable for his dedication to techno as he is his penchant for classical music, Kah first began composing music in his early teens and possesses over a decade of classical and jazz music experience as an organ player. An obsessive student of sound, Kah’s roots in electronic music can be traced back to an early appreciation of industrial techno — a strand of music that still greatly influences his productions to this very day.

Enamored by the never-ending complexities of electronic music, he began producing his own techno tracks in 2001 and has barely paused for breath since. “ With electronic music you have unlimited banks of sounds; the first thing I do when I create music, I search for one sound, capture it, and build a track around its very heart”, says Kah. It’s a way of working that’s proved especially fruitful. Aside from releases on his own imprint, Highwav, Kah has also represented some of the techno scene’s most credible and renowned outlets, from Dave Clarke’s White Noise to Terence Fixmer’s Planete Rouge and DJ Hell’s scene-defining Gigolo Records.

In 2018, Kah released his third full-length, Limited Resource. A suitably eclectic listen that epitomized just why he’s such a treasured talent, the album is one that’s based around live performances and maximalist sonic impact, all derived from a minimal set of tools. Earning glowing praise from compatriot Laurent Garnier and media such as DJ Mag in the UK and Groove in Germany, Limited Resource plays out like an electronic note pad, a pad where Kah expressed his deepest, darkest and most personal and vivid music ideas.

With further releases planned on Highwav before the end of the year (including the brilliant ‘Ballet’, which has already been picked up by Amelie Lens and Garnier), he will also be returning to remix duty, with electronic music pioneer Shazz getting the full Christopher Kah treatment.

From a performance perspective, Kah’s shows evolve the concept of traditional “DJing”, as he pairs synths, samplers and drum computers alongside his turntables.

“The gear I use is very minimum but elicits a maximum result. Instead of mixing only two tracks simultaneously, I customize the tracks to the way that feels right at that moment. I want to push the mix into another dimension, Closer to the public, and see how they react.” – Christopher Kah

A musician in the truest sense of the word, Christopher Kah is someone who brilliantly encapsulates all that’s great about electronic music. His might be an unconventional way of working, but it’s also one that yields results at an impressively consistent rate.