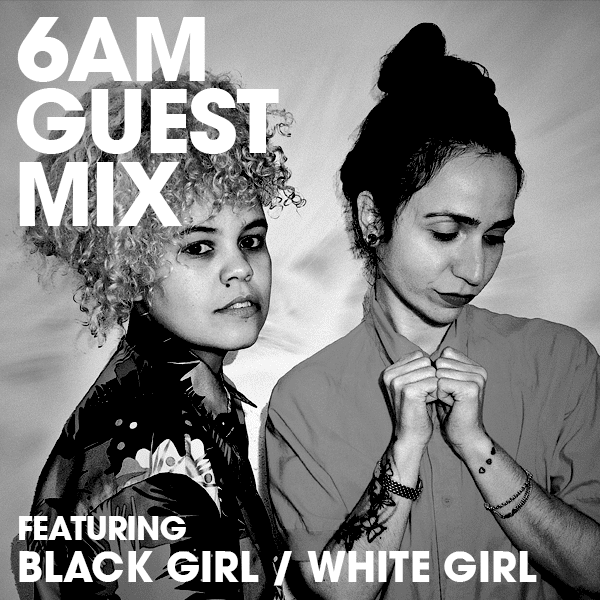 Amsterdam’s own BLACK GIRL / WHITE GIRL have a very special guest mix in store for 6AM this week. With this one-hour guest mix, the powerhouse duo seamlessly mixes multiple genres such techno, house, breaks, and more into a quintessential high-energy set for which they are known.

The duo are a force of nature squared, combining their taste for raw and rousing music in the fields of acid, techno, house, electro, and more. They channel this alongside influence from their respective Curacaoan and Israeli heritage, crafting tracks and sets that are packed full of potent sounds and able to keep dancefloors enthralled while veering in unexpected directions. Together, they are a couple living in Amsterdam and have emerged as a force to be reckoned with. Their knack for crafting craggy acid and jackin’ techno is only outmatched by the palpable collaborative energy they bring to their DJ sets.

“This is the set we’d play while the sun was setting right behind a dark and steamy Pride festival tent packed with 100% VAXXED techno, acid house, and breakbeat aficionados. We got laser beams blazing all over the crowd, steam hissing from the ceiling, sweat dripping from the jacking bodies, all of that. Each track amplifies the sensual energy, keeping the vibes fierce throughout the 60 minutes set… more than anything, this mix is about honoring our community.”

Their recent releases include the “Extravaganzza” EP on HE.SHE.THEY, a record that has rightfully been getting a lot of stream time. Their latest string of self-released hit singles “spoon”, “101010101” and “Hot Mouth”, and the “Physique” EP released on AEROBIK, the Paradise On Saturn EP released on UKR, and the Hyper Reality EP released on System Records are all strong displays of Black Girl / White Girl’s touted production prowess, amping up their hot streak of mutant bangers at the intersection of Chicago house and Detroit techno.

Despite the global disruption of 2020, Black Girl / White Girl continued their incredibly forceful run of form, gained support from across the techno community, and quickly established their strong reputation. They remain busy on the output front in 2021 with new music arriving including HALLUCIN8 on EI8HT Records slated for release on June 25.