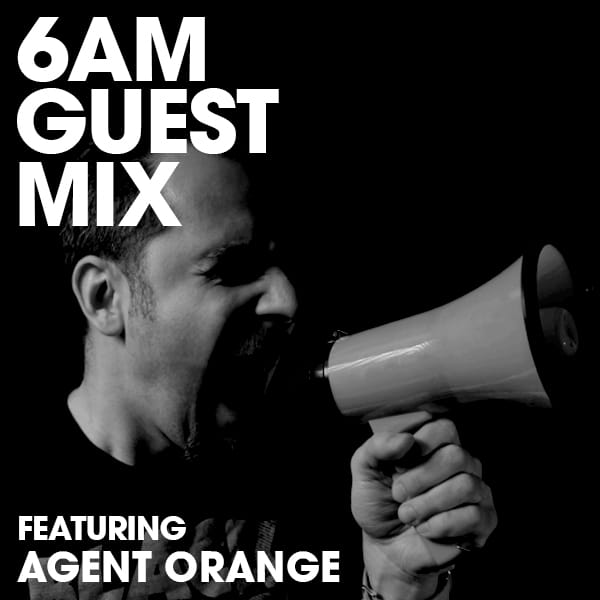 New York City-based veteran producer/DJ Agent Orange was kind enough to share a recording of his recent set at Momentum in Brooklyn exclusively for 6AM listeners.

“Stay Young. Love Techno.” is the theme that perfectly represents the groovy, dark and hypnotic music of Agent Orange.

Having cut his teeth during the legendary ’90s era raves and clubs in his native New York City, he has proven himself over the years as a pioneer and architect of modern-day dance music. He’s spent the last 25+ years pushing a sound that holds true to the raw unfiltered soul of his youth with a decidedly modern flair.

Agent Oragne has had over 40 releases and tracks that have landed in the Beatport Techno Top100 – two of which rose to #1 – for labels such as Tronic, Toolroom, Bitten, Nervous, Deeperfect, and Terminal M. His thumping hypnotic grooves have captivated the most discerning ears in the industry and led him to remix the legendary Carl Cox, who set off his 2015 Ibiza residency at Space with the Agent Orange track ‘No FAQs’ as the very first track of the season.

His energetic and dynamic DJ sets seamlessly blend cutting edge Techno with groovy dark House vibes, which lend some soul to the driving beats he loves. As flawless on the decks as he is in the studio he has rocked the stages of EDC Las Vegas, Electric Zoo NY, Ultra Music Festival Miami, The Zoo Project Ibiza, Space New York, Marquee New York and Create Night Club in LA. No stranger to festivals, he has brought his groove to label showcases during ADE, BPM, Miami Music Week and Sonar.

Even when he isn’t DJing you can hear his tunes being dropped on dance floors and DJ mixes around the world as his dedication and passion for writing dark and groovy cuts has been recognized by such industry giants as: Carl Cox, Adam Beyer, Mark Knight, Pan-Pot, UMEK, Joseph Capriati, Christian Smith, Monika Kruse, and countless others.

Living the motto “Stay Young. Love Techno.” is not an easy job. But his passion and life long commitment to grooving global dancefloors has helped Agent Orange has carve out his reputation as a world-class producer and exceptional live DJ.