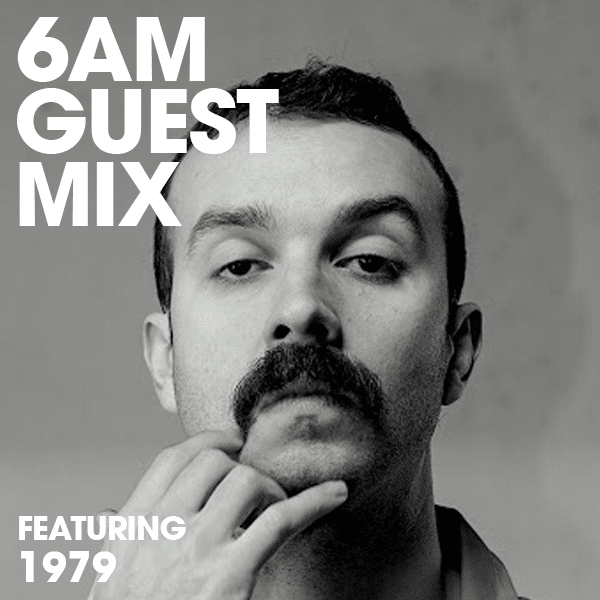 1979, also known by his real name Giovanni Salviato, is an Amsterdam based, Venetian-born artist. Featured prominently on HOSH’s fryhide imprint, and previously on Klangwelt and Addicted Music, 1979’s newest releases one after the other are gaining international success, and his Guest Mix encapsulates everything he is about today.

His early musical influences were sparked in the small town of Vicenza, in the midst of the Alps and Shakespearean Northern Italy. Following a background in classical piano, 10 years ago he dove into electronic productions with a steel determination and hasn’t stopped since.

“It first hit me when once 18 I stumbled upon a rave party in the mountains. I lived in a city between Venice and the Alps, where many of those illegal raves were being organised. There and then I was instantly mind-blown by the energy of the music controlling the crowd. The next day I was already producing with my first set and performing on stage in one year.”

The music to come from 1979 is is a curation of combined post-rock feel of melancholy, the energy of rave and the heavy base of techno. Listen to his Guest Mix below and read on for our exclusive interview as well as full track listing at the end of the interview.

Hi mate thank you for the chat! Where are you quarantined these days?

Hi! My pleasure! I’m currently based in The Netherlands where I moved in two and a half years ago. I spent the first two weeks of the quarantine in Mexico as I was touring there, I had so much fun, I’m glad I could have the chance to play gigs until the very end before the virus took over. Mexico is amazing! I enjoyed the sun, the beautiful landscapes and an amazing company until the last moment. But at some point, the world situation forced me to get on the first flight back to my home in Amsterdam.

How has it been going for you emotionally since this change?

First, when the virus started in Europe and they closed clubs I got pretty stressed and worried. It was difficult to believe this was happening for real, as for all of us. But now after a while, I accepted it as it is and I just know that the music going back to clubs and spaces and the scene will restart again, it is just a matter of time. Most importantly – we protect the vulnerable.

What do you miss the most from touring?

I miss the energy involved in that, from the day before leaving until the night you get back home… that feeling about traveling to make people happy and forget about the daily routines. The rollercoaster between slower weekdays and intense weekends during your gigs, that includes rush, flights, hotels, meeting new people and winding, calming down when you come back home. It makes you feel alive. Now it’s just flat, always like a Sunday.

How was a typical 1979 weekday before quarantine, and how is it now? What’s changed?

The biggest change in my life is my social interactions. I am Italian and even as one of the most quiet and calm Italians around, I still take pleasure in being surrounded by people, enjoying people’s company, entertaining people is in our blood.

Here in the Netherlands, even though the lockdown is not officially announced and people are free to go outside according to their own conscientiousness, most of us just don’t do that and stay in. I stayed in most of this lockdown, especially the two weeks I came back from Mexico. I miss even the small things you can enjoy here in the city, like going to a bar to enjoy a good cup of coffee or my favorite ramen place for a nice soup, those have been the little breaks that were key in my previous daily routine.

The good thing is, that right now I have much more spare time to make music and to do other things that require my full focus. Like meditation. I am actively back and meditating every day.

How else are you keeping busy, physically and mentally, through these interesting months?

I’m trying to think about the future with a positive outlook. I’m making plans and I started to make a nice body of work, a list of tracks that might make into an album, who knows? Working in the studio with a particular goal is very effective. Physically-wise I used to train kickboxing twice a week, however, since group lessons are not permitted or recommended, I started doing Yoga, which is great for the circumstances!

Have you taken up any new hobbies and activities?

In fact, I did. I was already into meditation before the pandemic but since one month I dove deeply into it. I use a technique called ‘Transcendental meditation’ other times I do guided meditations via Headspace. Every morning, after waking up, I get my dose of inner-peace, sometimes twice a day, the second session leading to the dinner. It makes me feel great and gives me extra power to stay calm and focused. I also re-discovered my passion for cooking. I tend to cook mostly vegetarian dishes and delicious recipes of the Italian Tradition ( Parmigiana di Melanzane, Homemade gnocchi, Pesto Alla Genovese and so on).

By the way, I absolutely loved the idea for Midnight (The Hanging Tree)’ feat. Jalja. Can you tell us first a little about the track, how it was conceived and what you hope it communicates to listeners?

It was the night before my debut gig at Watergate (Berlin) and I was just chilling in my living room when Hosh gave me a call: ‘Hey dude! I got an idea!’. His manager was telling Holger to try to use this melodic vocal from the movie Hunger Games, which at the beginning he was not much into it, but eventually, there was one of my instrumental tracks that seemed to be very fitting with that specific melody… I went to the studio right away and I put the vocal on top of my track… and the magic just happened. It was sounding just perfect. However, that was just the first draft.

In the next months, we were testing the track a lot trying to find the perfect arrangement and it was working the crowd super nicely every time. So once we had the perfect balance in the song, Hosh edited it properly and re-recorded Jalja singing.. and the rest is history :) I think the track resonates a lot with people right now also because of the melody that comes from a very famous movie, but we made it more direct, more accessible, and it seems to work very well. I’m very happy about this :)

This is a collab with HOSH. How was the workflow in terms of the production process?

There was a certain time, we were traveling together a lot, as I worked as the tour manager of Hosh. And so we spent quite a lot of time together touring. During flights, trains, or in hotels we could work a lot on ideas in terms of music, however in general mostly we work from our own studios, sending demos and drafts.

The lyrics for this track really resonate with me now, in the midst of a pandemic and quarantined. Do you feel the same?

Yes, I agree, it’s very relevant I would say, running away from a weird situation to find a safe nest with your beloved one, that’s everyone’s dream right now (or even the reality for the lucky ones).

How did you and HOSH end up choosing Jalja for the vocals? I think you made a fantastic choice.

Jalja is a real talent, her voice is pure power and has something different from the others, I’m glad she sang in our song. A close friend of Hosh’ once suggested her to him, and after they tested the track with her vocals, he was already pretty sure she could give that kick on Midnight.

And how about the video? Where did the idea come from?

The idea of the video changed quite a lot of times and we finally decided to go for this last one, where basically two people were finding a way to escape from something really bad. There could be a lot of interpretations of this, and that’s the thing we like. But we certainly didn’t expect the pandemic to happen. So right now when you watch it, it really brings your imagination to the actual situation. I love the fact that it was shot in Iceland, one of my bucket-list destinations; I’ve still have not been there, and watching the video of Midnight created that urge to go as soon as it will be possible!

Do you feel that videos are still important for music releases these days? How so?

I’ve been always quite a fan of music videos, so I’m really happy we ended up with a real proper one for Midnight (The Hanging Tree). Pop music releases always come with clips and I think electronic music in particular just step into an upper level when is accompanied by beautiful video footage. It’s for sure something I will try to accomplish with my future releases as well.

I imagine your plans for the year have changed drastically in the last 4-6 weeks. What do you have lined up for summer and beyond?

This is quite a tricky question. Unfortunately, it seems like my gig schedule was pretty much all canceled/postponed for the next 4/5 months, just like most of the DJ’s worldwide. However, we did a stream last week for the label ‘Lost & Found’ online which received great feedback so far and I’m now trying to organize a stunning streaming from Amsterdam, it will be a surprise so stay tuned! Also, I am preparing live chats on my Instagram live with some of my favorite Dj/producers out there in order to share some technical tips from our studios and also just to have some healthy distraction for all of us.

Regarding new music, I have already two new releases coming out in the next 2/3 months, two new remixes. One is for Dominik Eulberg’ Remix Album, on !K7 Records. And it is truly my honor to be featured alongside Anna, Recondite, Donato Dozzy, Mind Against. The other one is for Kidnap, also for his Remix’ Album that will be out on Armada Music. I’m very happy about both tracks, and I hope you will enjoy those too!

Thanks for your time 6AM! I wish you all a safe, healthy, and happy future!