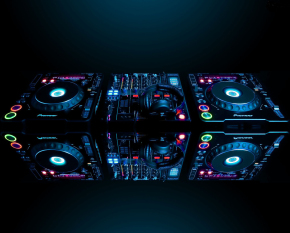 Electronic music has undeniably influenced the entire world in an amazing way.  Behind the music, there is a DJ who can masterfully orchestrate sounds that hypnotize and captivate the audience.  Everyone in this community has a certain sound or a certain DJ that makes them tick; we all have a favorite.  Has a DJ ever made you dance so much that everything around you just melted away?  Was there a moment when the DJ got you dancing like there’s no tomorrow?  We asked the 6AM Group team members:  “Who’s your Top 5 Underground DJs?”  It’s a very difficult question to answer.  There were some phenomenal DJs listed in the answers, but there were a few DJs that stood out a little more than the others.  Below are some of the DJs that were named more than once from our results:

Ben Klock:  You might see this German techno DJ and producer play at the Berghain in Berlin and all around the world.  Ben ranked 6th on RA’s Top 100 2014.  He also runs a label:  Klockworks.  Check out this set from Berghain:

Dubfire:  You might also know him as 1/2 of Deep Dish.  Label boss to SCI+TEC, he’s a techno DJ with a polished sound.  You can always count on Dubfire to kill the dance floor every time with his rolling bass lines and that signature Dubfire effect.  Hear what I’m talking about below:

Martinez Brothers:  These brothers from the Bronx have made one hell of a mark on the industry.  They have been on the road since high school and are definitely emerging leaders in the global house scene.  They have held a residency at one of the world’s best clubs, DC-10, since 2011 and show no signs of slowing down.  Check out this set from Ultra 2014 Sunday Underground Stage:

Paco Osuna:  The man behind Mindshake Records and Club4,  Paco is no stranger to the underground.  Below is a link where you can listen to this Spaniard throw it down at the Monegros Desert Festival:

D-Nox & Beckers:  The German DJ duo consisting of Christian “D-Nox” Wedekind & Frank Beckers have been making their mark in the global electronic music community for the past 7 years.  Check out their set below:

Adam Beyer:  The family man behind the epic techno label, Drumcode, it’s not hard to see why this DJ was on a few people’s Top 5.  Check out his set from the legendary Berghain on Drumcode Radio:

Slam: “Slam instigated Glasgow’s underground house music scene in the late 1980s, going on to be instrumental in the explosion of the UK techno scene, and their quarter of a century exploits have seen them travel far and wide, leaving scorch marks on the dance floor everywhere while taking their uncompromising vision of techno around the world.”  Check out this special 4 hour set by Slam:

The next 3 DJs you can consider 6AM Group’s top 3.  These next particular DJs were tallied several times.  They have influence several members in 6AM Group.

Jamie Jones:  The man behind Hot Creations, Jamie Jones has been credited for creating an iconic sound paving the way for a warmer, melodic, deeper side of techno.  Jamie Jones was ranked 12th on this year’s RA Top 100.  Below is his set from Timewarp:

Cajmere:  Curtis Jones goes by several aliases; you might be familiar with Green Velvet, that’s one of them.  Hailing from Chicago, Cajmere is a much respected veteran DJ in the electronic dance music community.  Click below to hear his set from the Electronic Playground Podcast:

Marco Carola:  This Italian DJ had the most votes from 6AM Group team members.  Label boss of Music On and leading the biggest underground party in Ibiza, Friday nights at Amnesia.  RA ranked him at 17 on this year’s Top 100.  At the top of his game, Marco is not going anywhere.  Check out one of his sets below:

The above DJs were just a drop in the bucket.  There are still several DJs that have not been mentioned that are followed closely by 6AM Group members.  DJs like Dixon (RA’s #1 DJ), Claude VonStroke, Carl Cox, Steve Lawler, Hernan Cattaneo, and much more.  In addition to all these DJs, there are still DJs out there that have not been discovered.  So keep your ears, minds and hearts open.   We’ll see you on the dance floor!