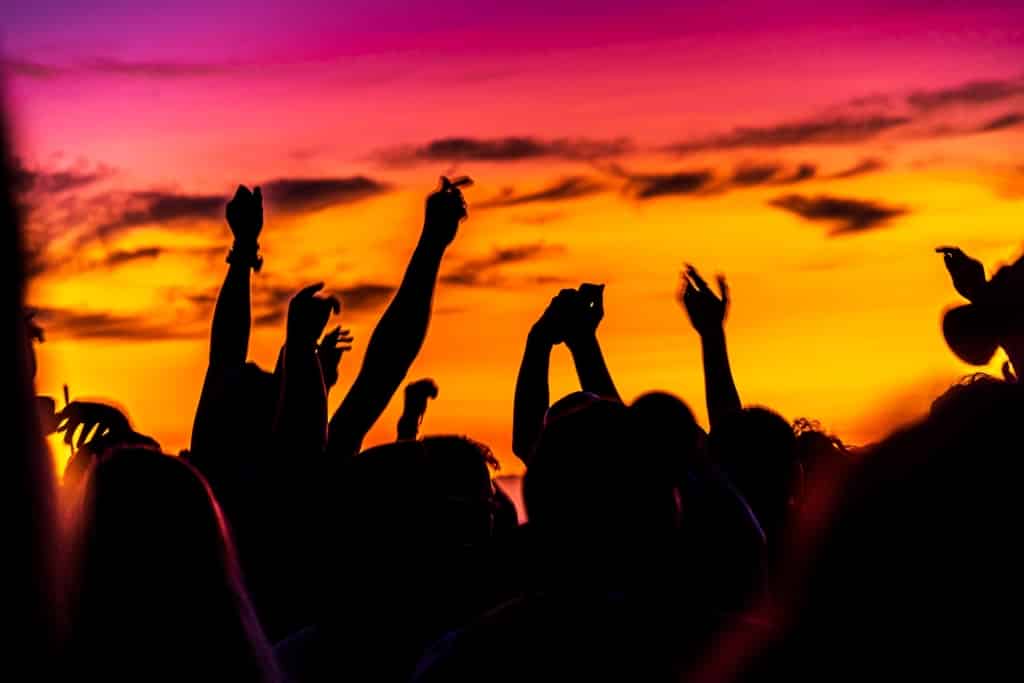 Summer is looking unforgettable with the best upcoming rave parties and residences by the most iconic DJs in the game. Take a look at what’s to come for the season, and where your favorite DJs will be landing at in Europe. 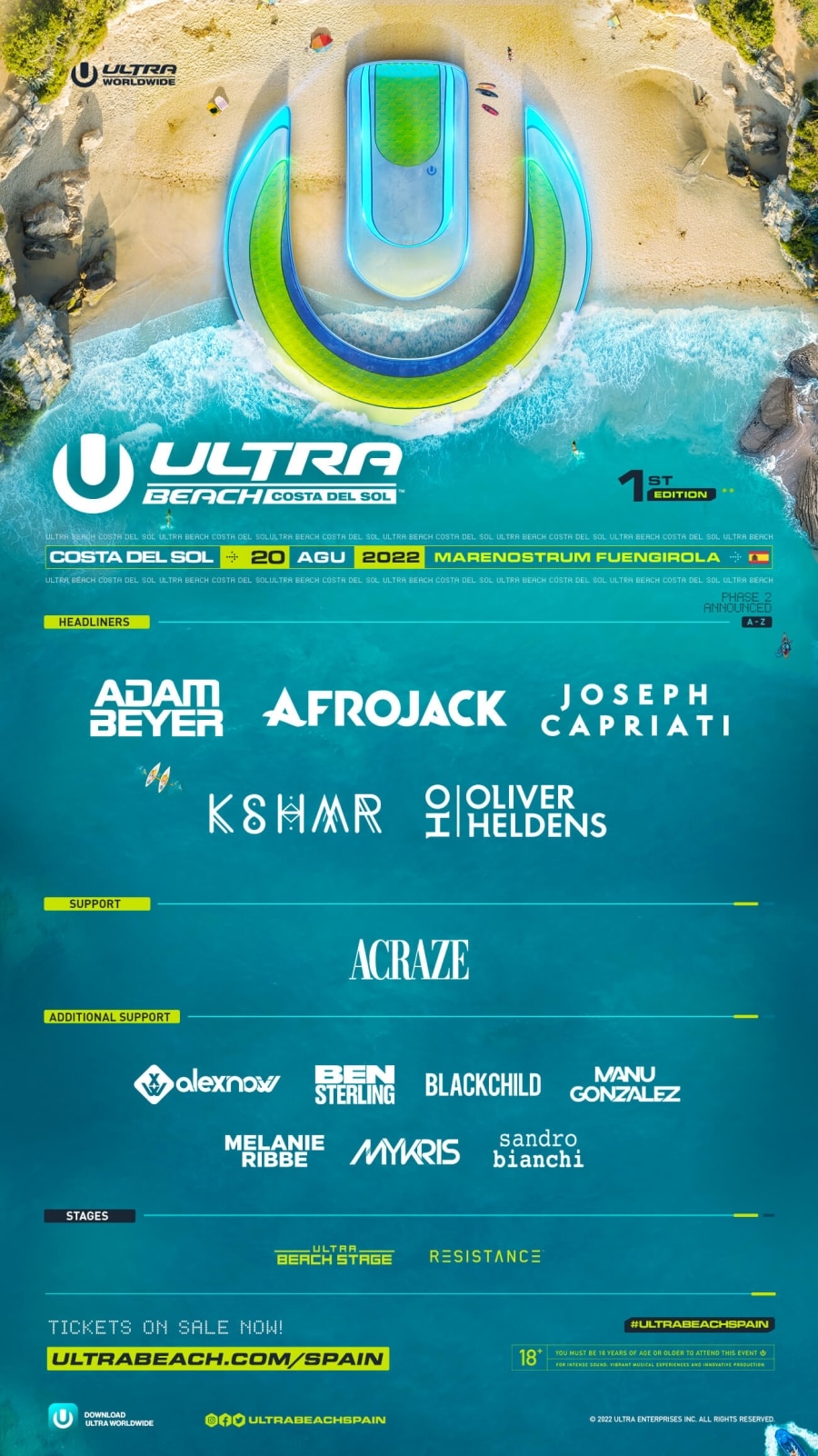 ULTRA Worldwide’s boutique waterfront festival concept ULTRA BEACH will touch down in Spain’s Costa Del Sol for the first time ever on Saturday, August 20th, 2022, taking over the beautiful Marenostrum venue in Fuengirola with a genre-bending lineup of international talent.

The Main Stage will be located on the idyllic shores of Costa Del Sol’s beach backed by the Mediterranean Sea, while ULTRA’s award-winning, underground techno, and house music concept RESISTANCE will host a stage at the Sohail Castle. ULTRA BEACH has welcomed tens of thousands of fans to festivals in exotic coastal locations around the world, from Croatia to Bali, so it’s no surprise that the picturesque oasis of Costa Del Sol is the next step for the brand’s continued expansion. 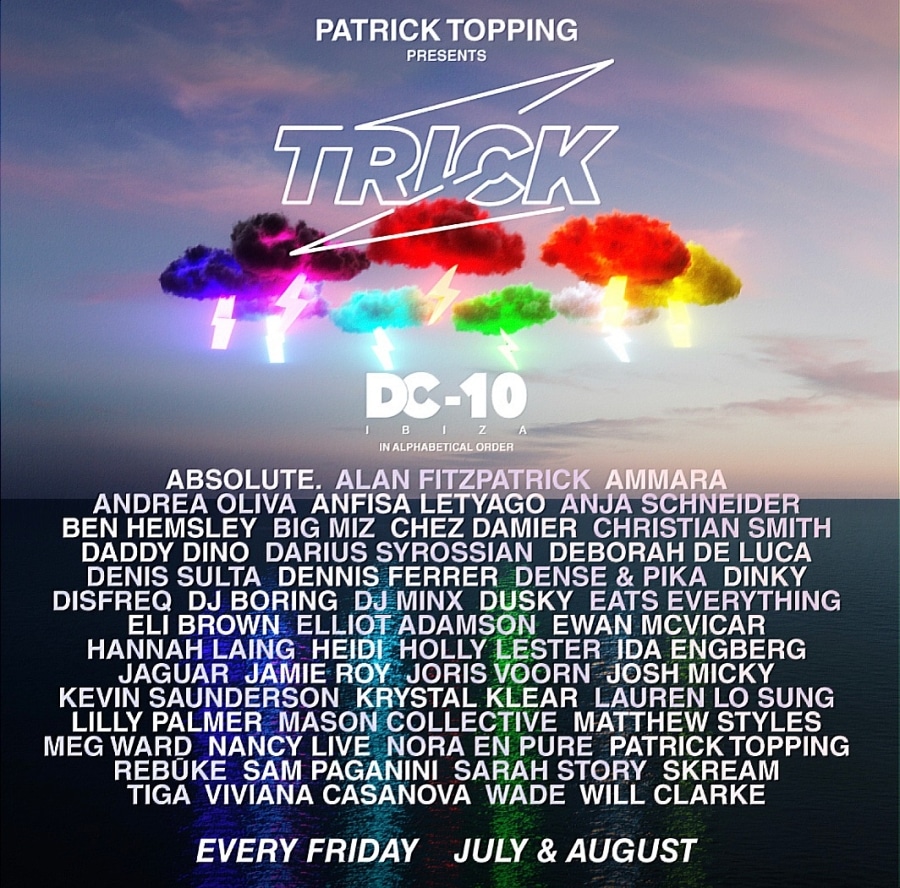 Taking place in the legendary DC-10, Trick will welcome a star-studded list of DJs to the White Isle, including label heavyweights such as Eats Everything, Andrea Oliva, Christian Smith, and Dense & Pika, as well as the new stars of the label, such as Ewan McVicar and Ben Hemsley, plus many more up & coming acts from the Trick roster and beyond.

There is also a massive list of guest slots from the likes of dance music luminaries Dennis Ferrer and Kevin Saunderson, to contemporary U.K. favorites Denis Sulta and Skream, Drumcode affiliate Ida Engberg, to the global icon Nora En Pure. The residency kicks off on July 1st, running for nine weeks, taking over both rooms, before closing out on August 26th. 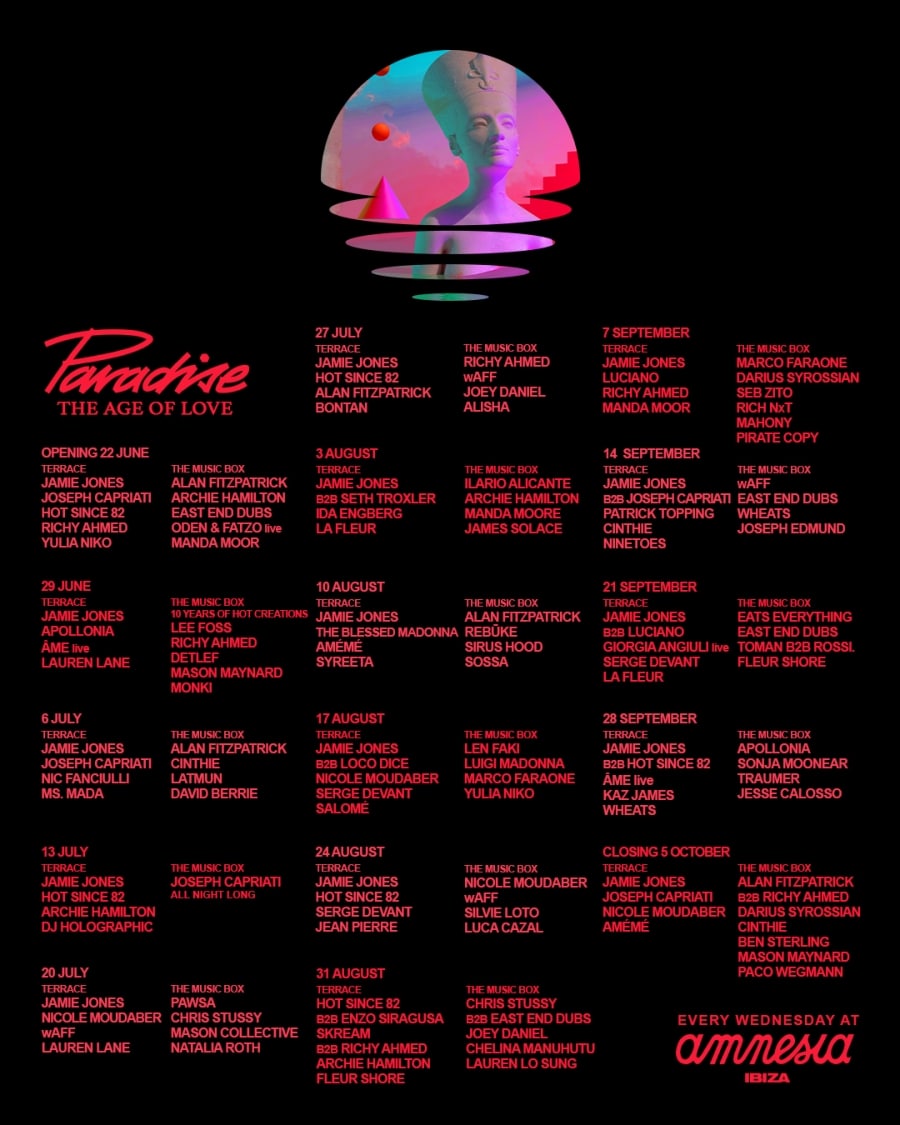 This summer, Ibiza’s most celebrated residency is ushering in Planet Paradise: The Age of Love (2022) — where past, present, and future dimensions play out simultaneously for the first time ever at the world-renowned Amnesia. For 16 Wednesdays, Paradise expands its universe from June 22nd until October 5th, attendees are invited deep into a surrealist world hosted by Jamie Jones.

Injecting the musical freshness each week will be new residents Manda Moor and East End Dubs — East End Dubs is one of the original players from the East London minimal groove scene. His unique sound both in the studio in the booth has a hardcore following, making him one of the most exciting DJs coming out of the U.K. right now. Paris-based DJ Danish/Filipino producer and DJ Manda Moor will be mixing up house and techno with authentic Chicago energy — she also runs the MOOD EDITS label with Sirus Hood and has had her tunes played by heavyweights like Jamie Jones and Loco Dice.

Other red hot newcomers include Benin-born DJ AMÉMÉ, one of the most exciting new talents in the Afro-house world and no stranger to grand stages like Coachella, Yulia Nikko, who mixes up sultry house with cutting edge grooves, a favorite of Berlin’s Watergate club, Amsterdam based Toman who releases on labels like we_r house and No Art label, Rossi. minimal house talent who was Forms resident at fabric London and Fleur Shore whose sets and productions ooze infectious basslines and captivating vocals.

Amongst many standout parties, there will be an epic 10 Years of Hot Creations takeover of The Music Box as part of the leading label’s anniversary tour plus Joseph Capriati all night long, and look out for a few select early openings in the garden. 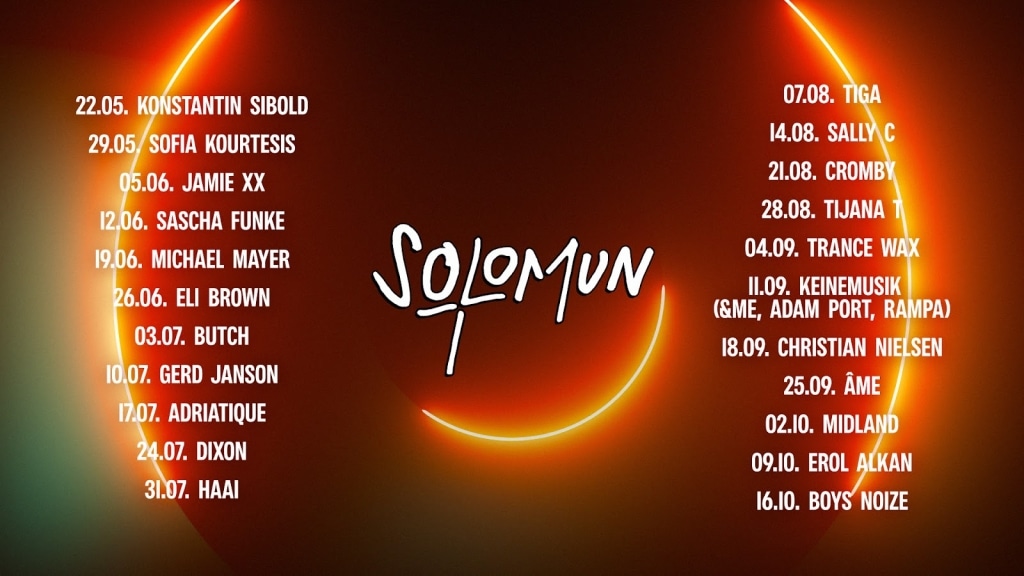 After an extended Covid-induced hiatus, dance music titan Solomun has announced that his legendary Solomun +1 residency will return to Pacha Ibiza for the summer 2022 season.

Kicking off on 22nd May, Solomun +1 is set to run for 22 consecutive Sundays, and will bring some of the most revered DJs on the planet to the White Isle. Guests include +1 favorites such as Dixon, Ame, Tijana T, keinemusik, Adriatique, and Gerd Janson, as well as iconic talents such as Jamie xx, Tiga, Boys Noize, and Midland. There are also a host of upcoming games, including Sally C, Sofia Kourtesis, Eli Brown, and Haai 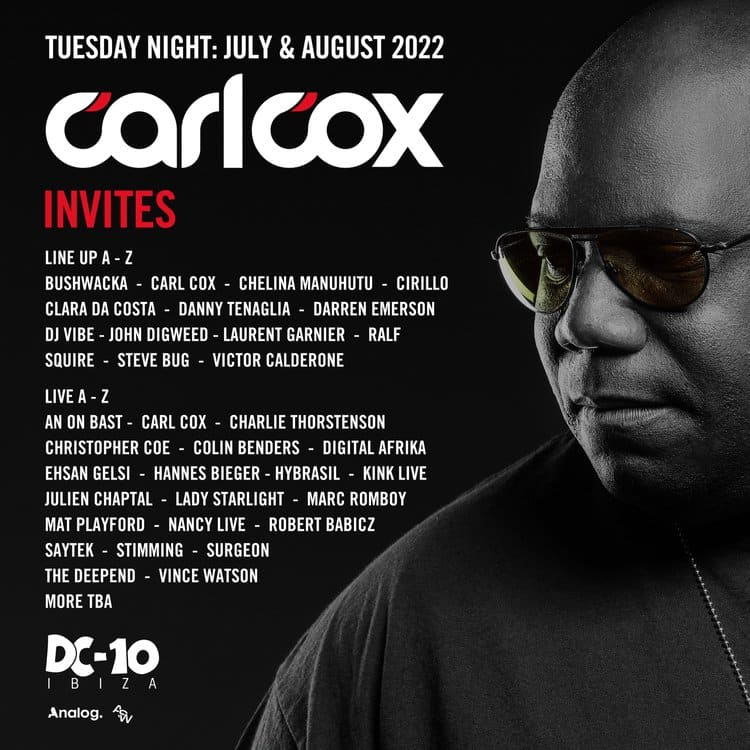 This summer with Main Room Residency, Awesome Soundwave will set up shop at DC10 this summer with the Carl Cox Invites events every Tuesday throughout July and August. The concept is to solely have  live acts performing in the main room (in true Awesome Soundwave style), and DJs on the famous terrace. As the live performance and hardware enthusiasts prepare for an inspiring summer on the island spread across eight dates, you can expect a heavyweight curation on the bill week in and week out.

The stacked weekly lineups have been announced, much to the delight of Ibiza party-goers in the coming months. Joining the label will be the likes of KINK Live, Hannes Bieger, the illustrious Marc Romboy, Elevator Program founder Hybrasil, An On Bast, U.K. performer Saytek, Surgeon, the legendary Kollectiv Turmstrasse, Colin Benders, and many more across the two-month programming.

Don’t miss these parties with He.She.They at Amnesia in Ibiza happening from July to September! 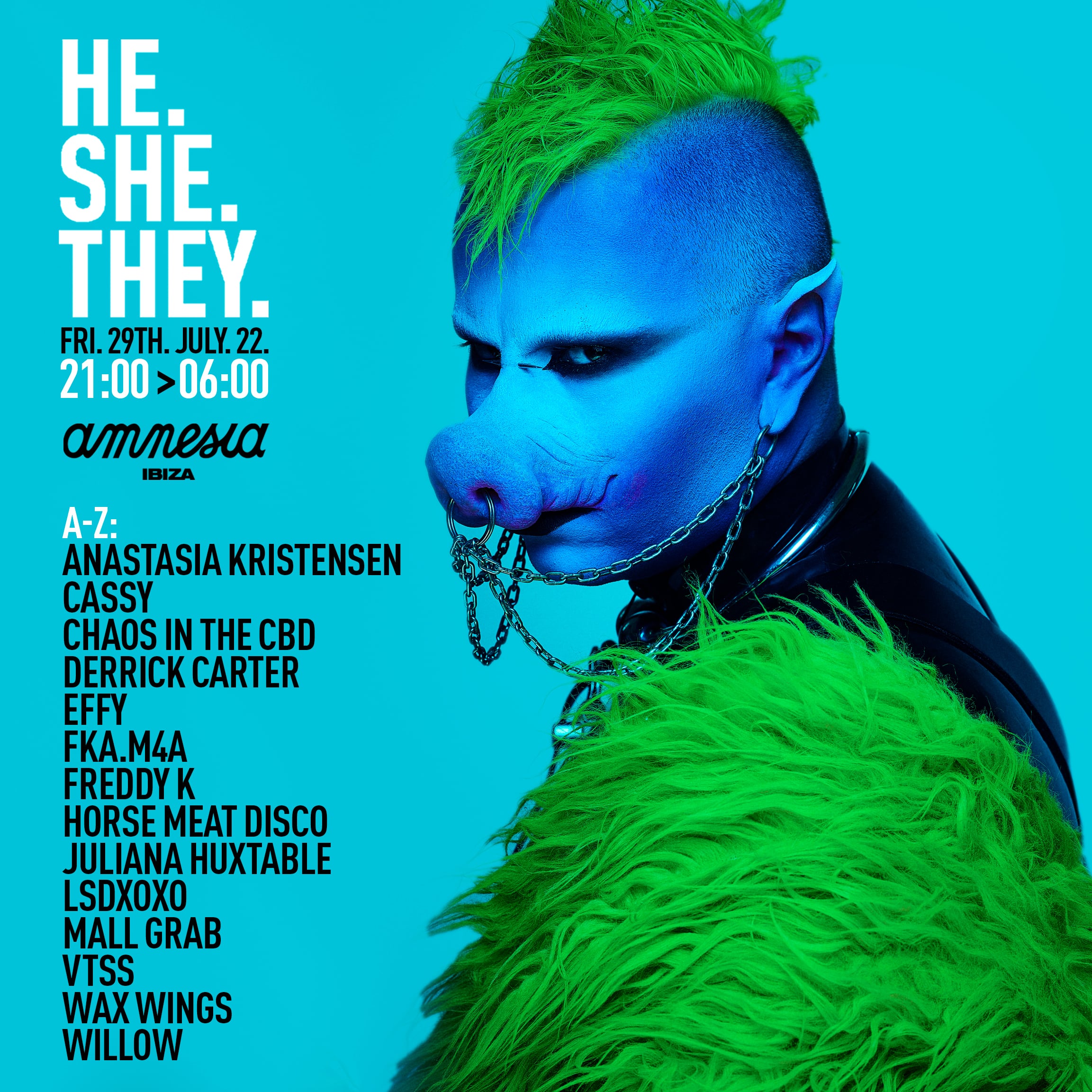 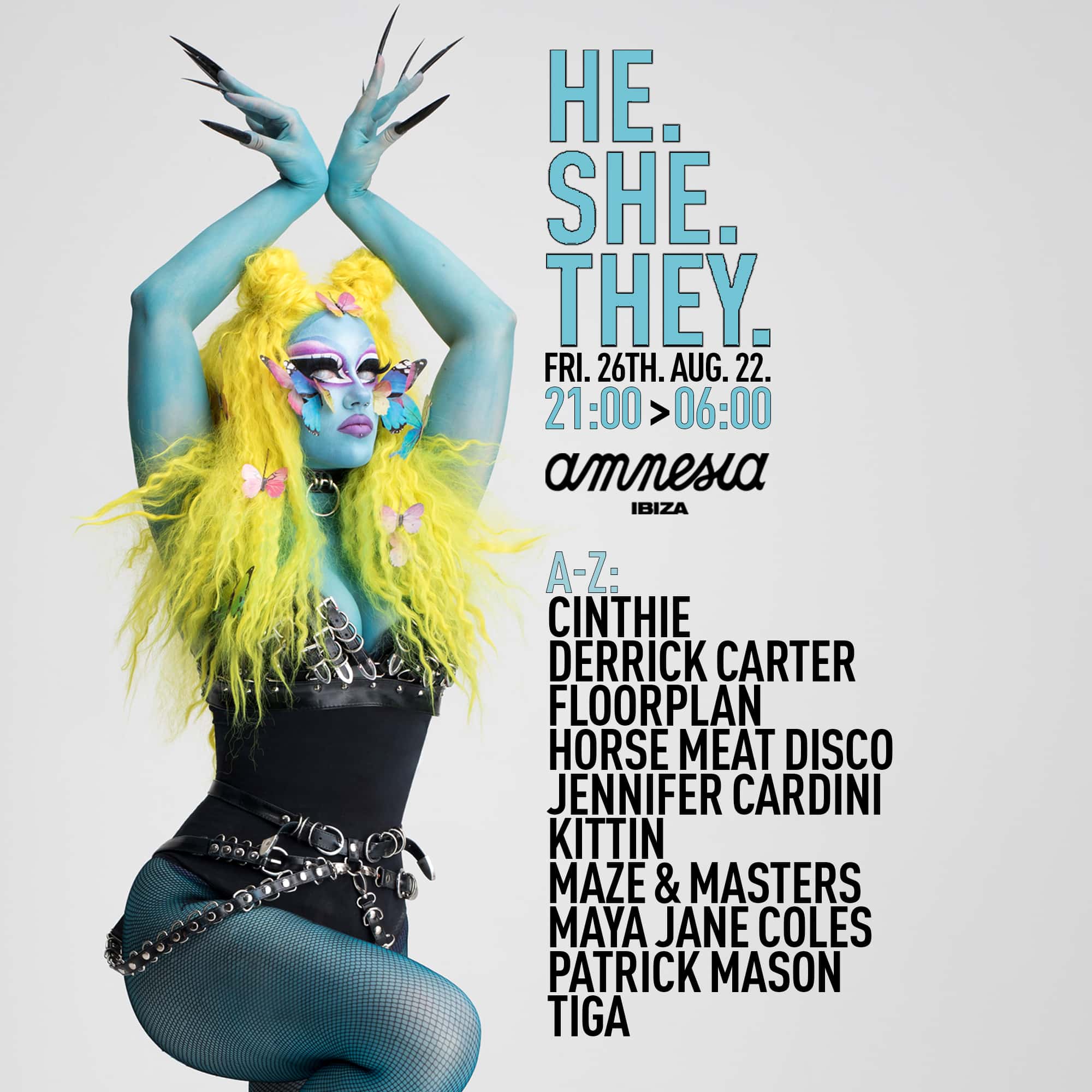 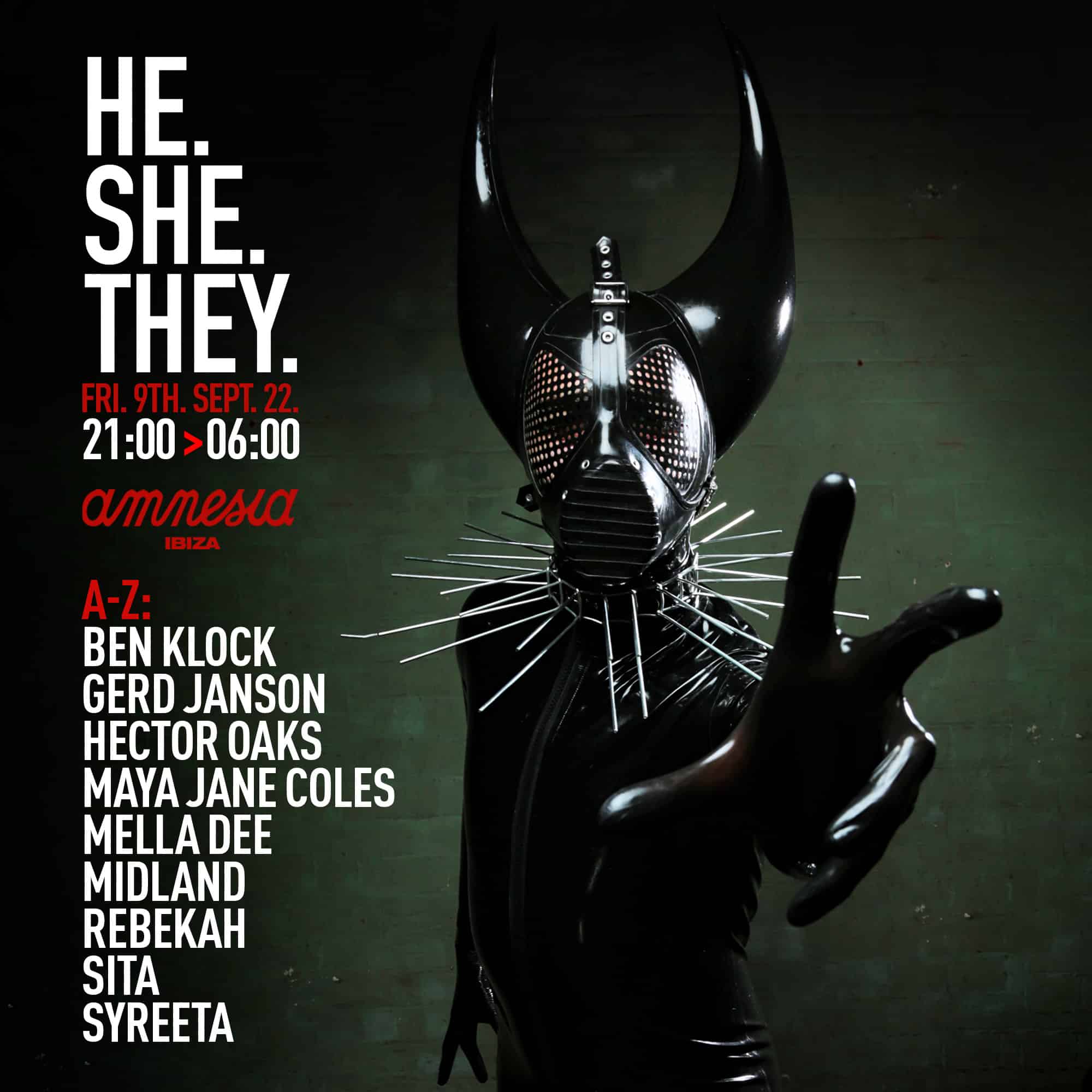