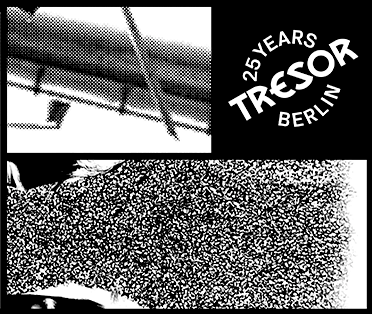 Twenty-five years is an eternity in club years. But Tresor is more than just a club, as evidenced by the plans to celebrate its milestone 25 year anniversary with a world tour that will touch down in Detroit, Paris, London, Sydney, Madrid and beyond.

Founded in Berlin in 1991, Tresor played a catalyst role in connecting the techno scene born in the US with the emerging love for the genre in Germany. Thanks to Tresor the likes of Jeff Mills, Juan Atkins, Kenny Larkin, Blake Baxter and Mike Banks made their international debut with gigs at the club’s old home in Leipziger Straße.

Tresor has since moved to a disused power plant in Berlin’s Mitte district, which will also host six of the birthday events part of the announced world tour. Although the line-ups are still TBA, you can expect a slew of techno talent, old and new, to provide the soundtrack for the celebrations. The Tresor Festival is included in those six dates, taking place at the club from July 21st until the 23rd.

In the past we have heard of Tresor founder Dimitri Hegemann’s plans to open a club in Detroit, so it perhaps comes as no surprise that Tresor is set to play its first party in the Motor City on May 28th during Movement weekend – the only leg of the tour on US soil. The other stops will be throughout Europe and Australia.

The club as also announced a mega-compilation set to come out later in the year. While details on that are still vague, they have announced some of the names associated with the release: Juan Atkins and Moritz von Oswald (as Borderland), Objekt, Mike Huckaby, Dasha Rush and Marcelus.

Hegemann reiterated the club’s mission in a statement reported by Resident Advisor, “The message from 25 years of Tresor is just as its always been, and as topical as ever: Give young people space to realize their ideas. Say yes to their experiments.”