20 Years of House in Los Angeles with Sacred Grounds 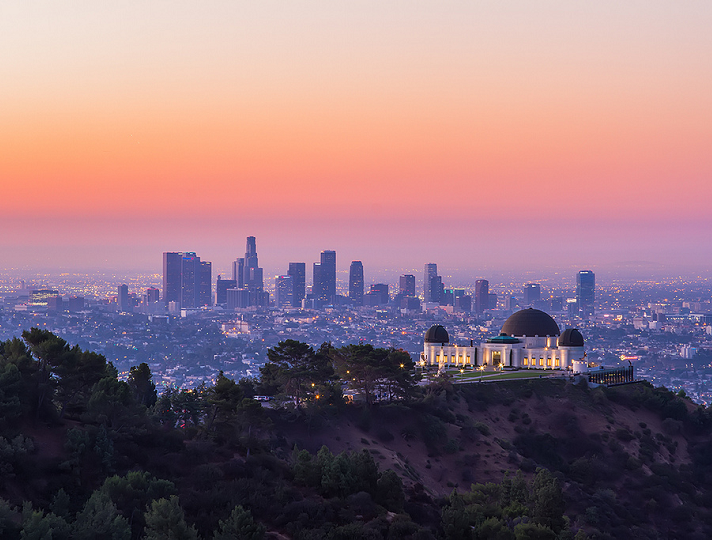 20 Years of House in Los Angeles with Sacred Grounds

Dance culture has evolved at a rapid rate around the world; some countries faster than others, but each rich with their own unique history. Where some cultures have developed a very specific sound, Los Angeles has always been a diverse melting pot of musical ideas and groups. Amidst the musical diversity, however, one thing is certain, and it’s that Los Angeles has and always will have deep roots in the underground rave and house scene. 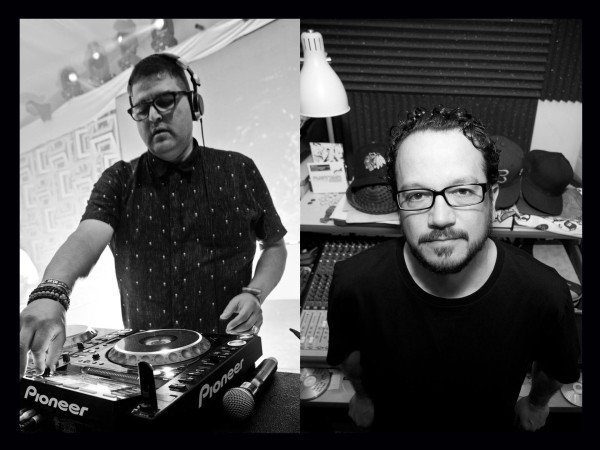 This Labor Day weekend will mark a very special occasion for the Los Angeles scene too. Sacred Grounds, one of the most influential house music collectives in LA, will be celebrating their twenty-year anniversary with none other than Doc Martin and Mark Farina. The two house veterans are gearing up for a 2 x 6 open format back-to-back, with a few additional surprises for the live set.

In light of this monumental occasion, we sat down with Sacred Grounds founder, Carlos Gdubbs, to get an expansive history lesson on 20 Years of House Music in Los Angeles. From his early foundations in the underground, we move through topics and stories ranging from his first official party to the territorial divide of the 90’s, eventually leading us to where we stand today, 20 years later.

Our discussion starts over a cup of coffee on a cool morning Downtown across from Exchange LA, with Carlos explaining to me some of the origins of our beloved scene. There’s a laundry list of major players who helped forge the landscape for house music in Los Angeles. People such as Marques Wyatt, DJ Dan, Barry Weaver, and Steve Loria, to name a few, all come up in the initial conversation, but one person who stands out to Carlos in the Los Angeles rave scene goes by the moniker, Mr. Kool Aid. I was just as surprised to hear such a name, but as Carlos speaks, the story begins to unfold.

“He’s one of the creators of the rave culture in Los Angeles,” explains Carlos. “He was one of the people to start bringing out guest DJ’s too. He brought out Markem X from Vancouver, and he was one of the first people to introduce Doc Martin to the scene.” 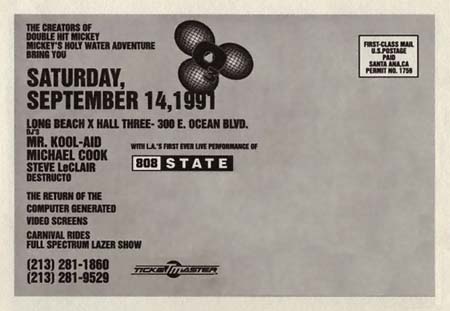 Over the years the infamous Mr. Kool Aid hosted numerous parties such as Apocalypse, Mickey’s Holy Water Adventure, and 808 State featuring artists who would go on to be considered the musical taste makers of the 90’s in Los Angeles and beyond.

The early 90’s was comprised of multiple promoters and groups that each played their part in developing a scene. People like Gary Blitz and DJ Trance, or Marques Wyatt with Club Brass, all played important roles in the formative years of house music in Los Angeles. Hell, even Gary Richards throwing a massive New Years Eve party at Knotts Berry Farm in 1992 had a major impact on the scene. It attracted media attention at the time, and surely facilitated in more widespread awareness of raves through the eyes of the public. As time passed, the scene grew more and more, becoming a musical and cultural phenomenon on the West Coast. 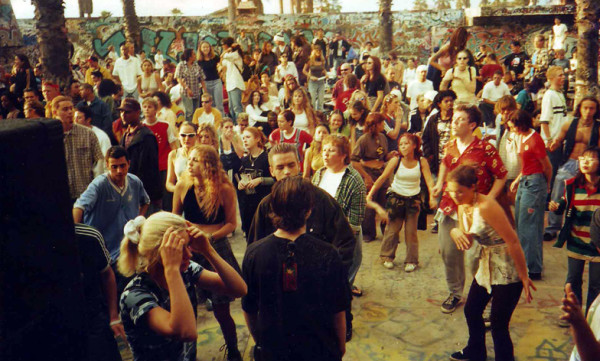 By the way, we dug up an article from the LA Times leading up to that “rave party” at Knotts. More than 20 years later, and that 1992 article still sounds like the media today. But alas…

The music, in conjunction with a counter-culture mentality, allowed the Los Angeles house scene to establish its foundation, and like many, Carlos started his journey into the underground as an enthusiastic fan of the music and environment. Unlike the clubbing nightlife in cities like New York or San Francisco, Los Angeles kept it’s roots firmly in the warehouses sprawled throughout the city.

Not many would argue the fact that there was something incredibly special brewing, but at the time no one could predict what the future would hold for this scene. In order to fully appreciate the significance of the Sacred Grounds 20 Year Anniversary, we must take a look at one of the first parties Carlos threw before Sacred Grounds entered the picture.

“I started throwing parties in high school. I started off with back-yard parties. I was part of a crew too, and we would do warehouse break-in parties. We’d find vacant or empty warehouses, cut the locks, set up, and have a rave [laughs]” – Carlos Gdubbs

It’s the summer of 1992. Carlos is a senior in high school, and he’s preparing to host RedWorld, his first major party. He partnered up with his friends Mark Olivas, Rick Sebastian, Ismael Perez, and his cousin, Eddie Puente, and the efforts began for this young cast of characters to leave their mark on the Los Angeles scene. Despite some experience hosting warehouse parties, RedWorld was different, and he was up against all odds on this endeavor. 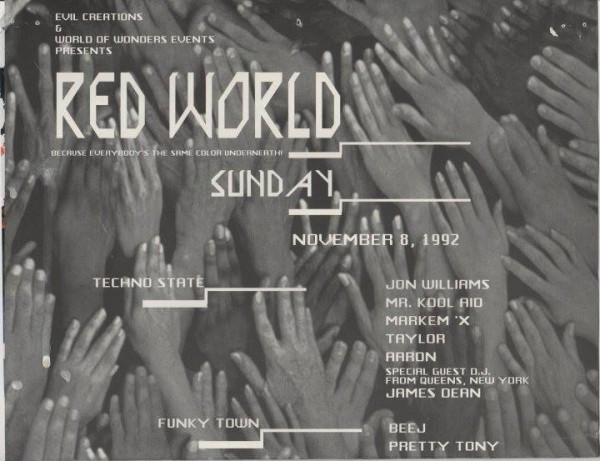 “My friend Rick was the only one with a car, and he had to put the car up as a deposit for the venue! That’s how poor we were, but the passion was there! The owner was such a sweet lady too. She was like, ‘Are you sure you want to do this? It’s a Sunday and it’s not the holiday weekend…I don’t want to take your car’”

Luckily, Rick didn’t lose his car, and RedWorld went off as a huge success. With over 800 people in attendance, they paid the deposit to the sweet old lady, and raved deep into the morning going well past 6:00 AM. Underground idols such as Markem X, Mr. Kool Aid, and James Dean graced the decks that glorious night, and Carlos realized that he had a talent for uniting people through music.

Carlos has always approached the scene with pure intentions and the upmost sincerity for the music. In his early days of throwing parties he would even be kind enough to go around at the end of the party and offer free water and fruit to those still around. A gracious host to say the least, and one that has a knack for establishing a bond with the community.

Unfortunately, the same can’t be said about everyone, and there were some hurdles that had to be overcome before continuing on the path he had chosen. Upon returning from the Navy around 1995, Carlos points out that there was an unhealthy divide between East and West Los Angeles, and one that would plague the underground for a brief period of time.

“Back then, which is sad, there was an East side and West side scene; West side being parts of LA from Downtown to Hollywood, the [San Fernando] Valley, Santa Monica area. Then East Side was anywhere East of Downtown, obviously. I lived in Whittier so I was considered East LA by a lot of the people.” 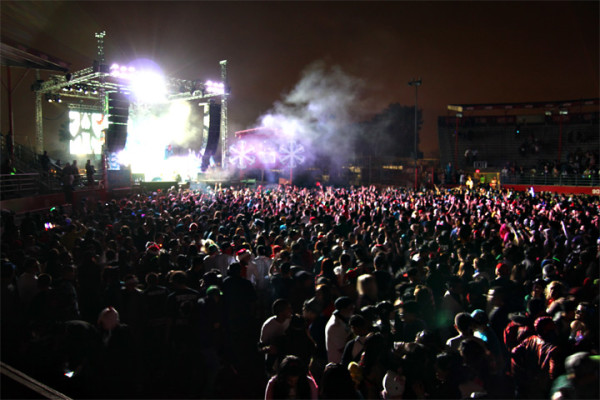 Territorial divides aren’t necessarily uncommon in Los Angeles, but the negative impact it was having on the music was out of hand. Be it petty tactics such as calling the police on “competing” events or personal grievances with other people in the scene, it was time to unite the city under one common factor. One individual who rose to the occasion is Patrick Smith, one of Carlos’ mentors and a valuable ambassador of the LA scene.

“One of the biggest players was a person by the name of Patrick Smith, who used to go by Dr. Sisko. He always had a vision, and he mentored me growing up when I was doing my shows,” explains Carlos. “The West side people saw what he was doing, and they exploited him. He knew he was being exploited too, but he had his own agenda. And that was to bring the East side crowd into the West side crowd and show them we’re all the same”

The party that followed was called Sonics, and 5,500 unified Los Angeles ravers came together at the Hollywood Palladium for a massive celebration of music. After seeing the results, Carlos was convinced and began the plot to start Sacred Grounds.

“The way I’ve always looked at the shows that I do, I always compared them to kids or babies. Because they were my babies, and I nurtured them so they could grow into something, just like Sacred Grounds” – Carlos Gdubbs

Sacred Grounds was founded in 1995, and with the help of friends and family Carlos was able to establish one of the most prominent house collectives that always maintained the strong underground vibe of Los Angeles. With a “hope for the best, expect the worst mentality”, Carlos embarked on the journey in the best mindset, which is why Sacred Grounds has stood the test of time over 20 years. 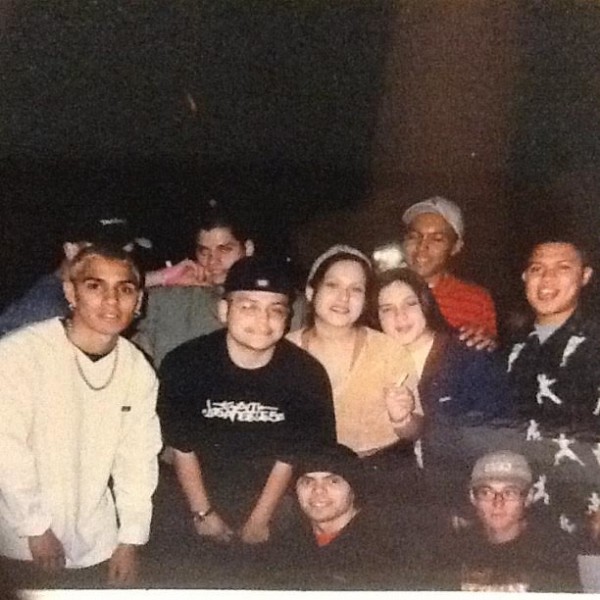 Over its 20-year tenure, Sacred Grounds has hosted events with some highly respected members that the underground music has to offer. From the likes of Doc Martin, Mark Farina, and Marques Wyatt, to Derrick Carter, Phil Weeks, and DJ Sneak, Sacred Grounds is one of the most authentic brands in LA.

But don’t just take my word for it…

As Doc Martin puts it, “Sacred Grounds is one of the originals. Holding it down for 20 years is an amazing accomplishment in itself. Always rocking!!”

In the photo to the left you can see the original members of Sacred Grounds, 20 years ago. 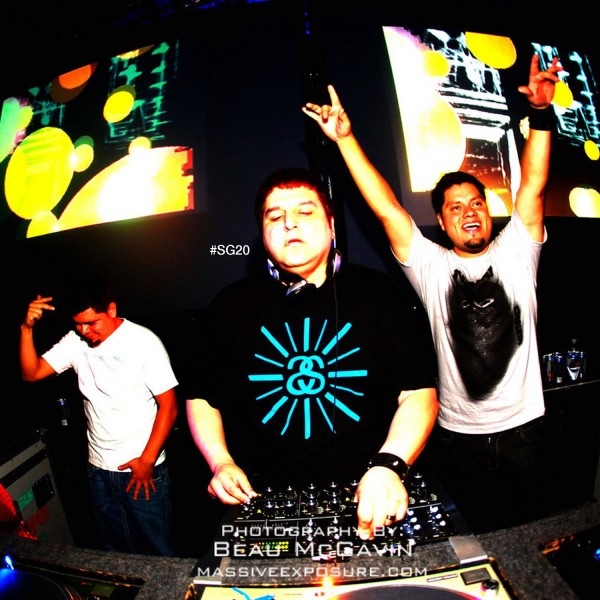 The recent 15 year anniversary of Sacred Grounds saw Doc Martin lay into a set of pure house grooves for four hours, and his upcoming back-to-back with Mark Farina is going to be a hybrid set worth seeing. We say hybrid because rumor has it that they might also be armed with a Roland 303 and 909. As if our excitement wasn’t already peaking.

“I’m leaving the format up to them” Carlos states emphatically. “I wanted to make it clear that they can do it how they please. I feel once you give them that freedom there’s no restriction, and the sky is the limit”

With the music secured, Carlos is also going the extra mile when it comes to production for the Sacred Grounds 20 Year Anniversary. His long time friend Omar Herrera has previously worked on stage production for Live Nation and the Chemical Brothers, and he’ll be bringing in his expertise to make sure the sonic and visual ambiance is up to 20 Year Anniversary standards. 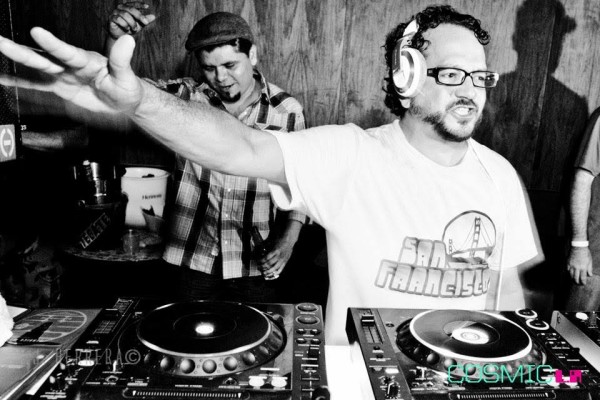 We continue to talk about everything that makes an event special to us, and we reminisce on past experiences, taking a moment of satisfied silence before our conversation comes to a close. Carlos leaves me with one final note about the event before we part ways, and it’s that “the twenty year anniversary is going to be very special; not only for [him], Doc, Mark, and everyone involved, but for the entire city of Los Angeles as well. It goes to prove that [they’re] here to stay.”

The underground community holds sacred Grounds in high esteem, and on September 5th we will gather together to celebrate this landmark event for one of the longest running underground events in Los Angeles. Keep in mind that everyone needs to RSVP in order to get the address for this very special occassion

For more information on the Sacred Grounds 20 Year Anniversary, see the links below.