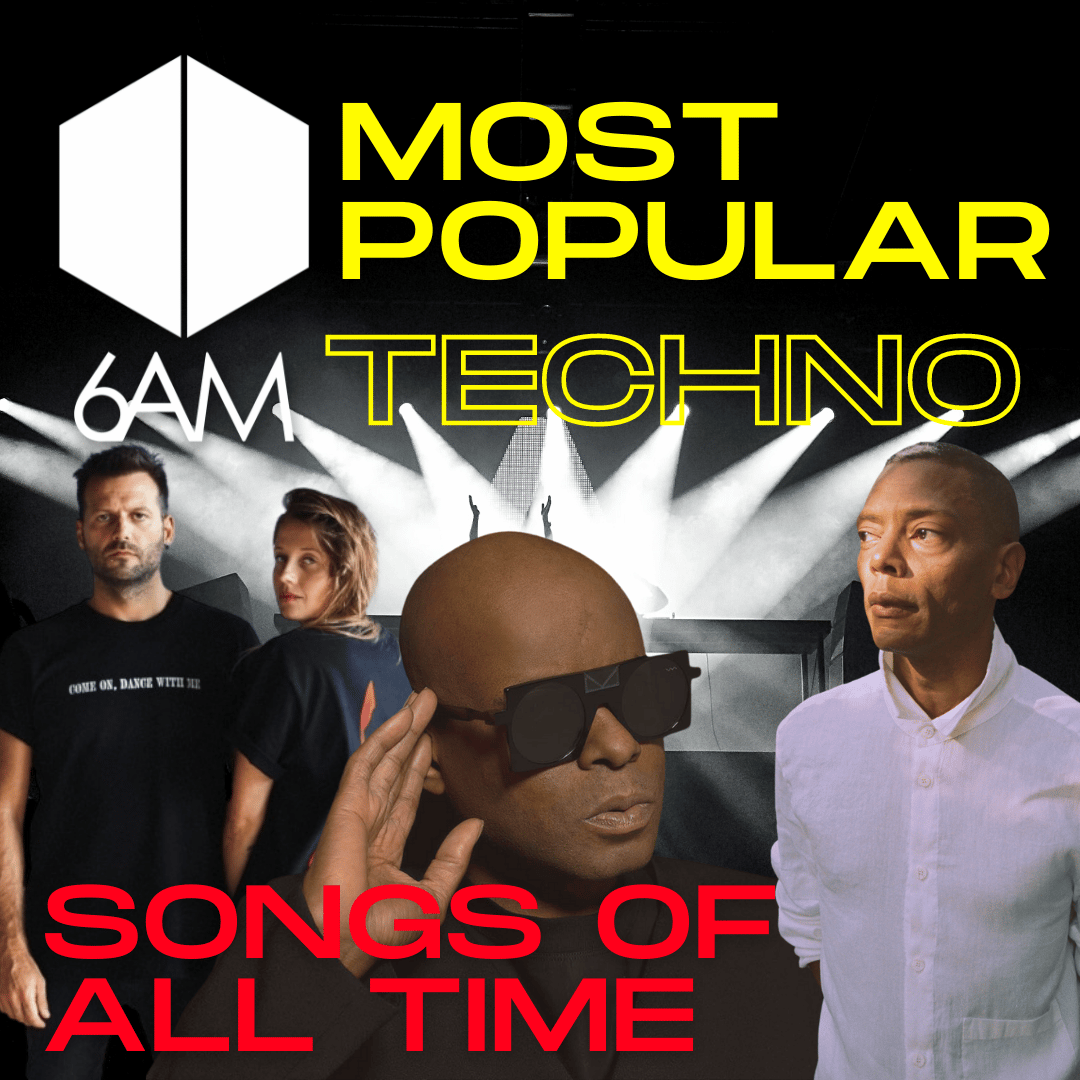 There are so many tracks that have defined the generation and evolution of techno. From the early days of Detroit techno to the current state of techno, there are tracks that are indelible to the technosphere. With each decade there have been smash hits that techno fans talk about to this day. However, with the creation of subgenres on top of subgenres, it’s impossible to nail down a few tracks that fairly represent the decade and all the genres as a whole… and without bias. That being said, with the best of intentions, turn on that flux capicator hop into this time machine of an article, and get ready for a flashback of some of the top techno tracks from 1980’s until now.

3 of The Most Popular 80s Techno Songs

This is the period where techno got its start and thus a new generation of music was born. These 3 hits are the techno classics and should be in the minds and hearts of all techno fans.

Model 500 is the alias of Juan Atkins of “The Bellville Three”. His track “NO UFO”‘s was released in 1985 and was considered by some to be one of the first techno albums.

Inner City is the collaboration of Kevin Saunderson (also of “The Belville Three”) and Paris Grey. Their track “Good Life” was one of the pinnacle detroit techno tracks and was a it when it was released in 1988.

In 1987 Derrick May (the final member of “The Bellville Three”) and Michael James released “Strings Of Life” under the name Rhythim Is Rhythim. This track is a historic Detroit techno track that is even sampled and played to this day.

3 of The Most Popular 90s Techno Songs

Techno’s popularity began growing like wildfire in the 90’s and even poured over to the mainstream. More sub genre’s were popping up and the sounds of techno began to change as different technologies and regions were influencing the sound. At this point it becomes very difficult to name the top tracks of this era due to the wide range, but here are some definite notable tracks that got people moving in their JNCO jeans.

1990 started off with a bang with Joey Beltram‘s “Energy Flash”. This dark techno rager is an iconic track that put Beltram into the techno history books.

Many would not consider C+C Music Factory‘s “Gonna Make You Sweat” as “true” techno. However, to the mainstream audience it was known as “techno pop” and was a massive hit in 1990. This track was quite possibly was one of the first indicators that techno was no longer an underground and unknown genre.

It wouldn’t be a true 90’s techno playlist without Jeff Mills‘ “The Bells”. This 1996 release is an undeniable classic as the hypnotic bells riffs are the most recognized sounds to this day.

3 of The Most Popular 2000s Techno Songs

The 2000’s represented a time where techno became much more minimal and bass heavy. Labels like Richie Hawtin and John Acquaviva‘s Plus 8 became a defining sound of the decade. Once again there are NOT the absolute top 3 tracks of the decade, but definitely 3 of some of the most popular tracks.

With a voice that is unmistakeable, Green Velvet has made classic after classic. This 2001 hit is no exception and is still beloved to this day.

This minimal hit came out in 2008 and is one of the quintessential driving minimal tracks of its day.

This track of Eric Prydz dark techno alias Cirez D is a raver favorite since it came out. Simple in nature but with a large driving sound this track is played at all different parties to this day.

3 of The Most Popular 2010s Techno Songs

In the 2010’s techno really started to make a comeback within the dance music scene and artists began to create tracks that were bigger in sound and feel. Once again, more genres were either being created or gained even more popularity in this time period as well. There are tons of massive hits that began popping up in this era, but here are a few noteworthy tracks of its time.

Phunk Investigation & Schuhmacher “From The Dust” 2012

This 2012 hit was featured in Beatport’s list of one of the top selling tracks of the decade.

Maybe this wasn’t the most popular track of its day, but this 2015 track was definitely a key indicator of the rise in popularity of Stephan Bodzin and of melodic techno in general. Within this decade melodic techno’s popularity grew to such a point that Beatport had to establish a separate genre in 2018.

Everyone and their mom pretty much played this 2019 smash hit. A huge collaboration with so many techno heavyweights made it an inevitable popular track.

Most Popular Techno Songs In 2020’s

Rounding up the decades is of course the 20’s. Needless to say the decade didn’t get the most ideal start with “the year that shall not be named”. However, with or without parties techno artists persevered and still created banger after banger. Here are some of the most popular tracks that came out of the quarantine years.

This 2020 raw hypnotic track dominated the Beatport Raw charts for a good amount of time. Beatport also listed it as the 2nd top selling track of the genre in 2020. Even if you don’t put much credit to the top sales list, this track was definitely on heavy rotation through people’s playlists.


This techno power couple‘s remix of this 90’s trance classic was also top charting track in 2020. Once again, not exactly the most run of the mill year for dance music, but this song definitely generated a lot of buzz.

Pretty much any track from this acid techno pioneer is going to be a great crowd pleaser. D.A.V.E. The Drummer released this track in 2021 and was the 7th top selling track of the year on the Beatport Hard Techno Charts.

There are so many good tracks out there that it is impossible to do them all justice. However, hopefully this list was a good starting point to either go down the rabbit hole yourself, or give a new techno friend a guide into their untz adventure. The only thing to say for certain, is that after 40+ years of techno amazement, the genre is only going to keep evolving and producing more and more hits.