12 Open Air Venues You Need to Visit This Summer 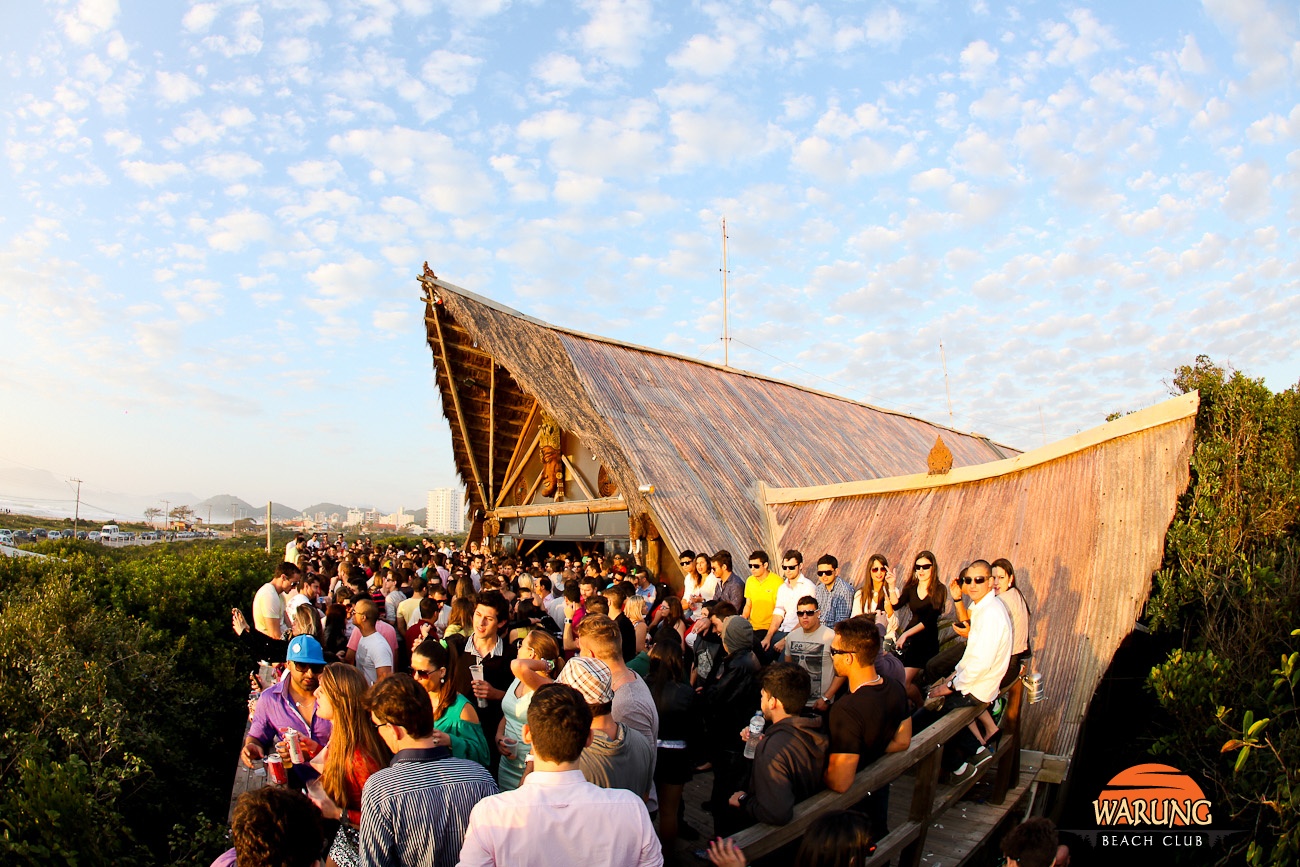 12 Open Air Venues You Need to Visit This Summer

If there’s one supreme thing to look forward to during the summer it’s open air parties. Warm weather and blue skies overhead as lush house grooves emit from the speakers – it’s a hard scenario to beat.

Throughout summer it’s not uncommon to see open-air pop up parties such as Richie Hawtin in Plaça de la Boqueria, tINI hosting beach events in Ibiza (until they get shut down by authorities), or Subtract and Sublevel taking over a golf course in Malibu. But pop-up parties aside, there’s established venues that will be grooving all summer.

Here are 12 open air venues that we have our sights on this summer. 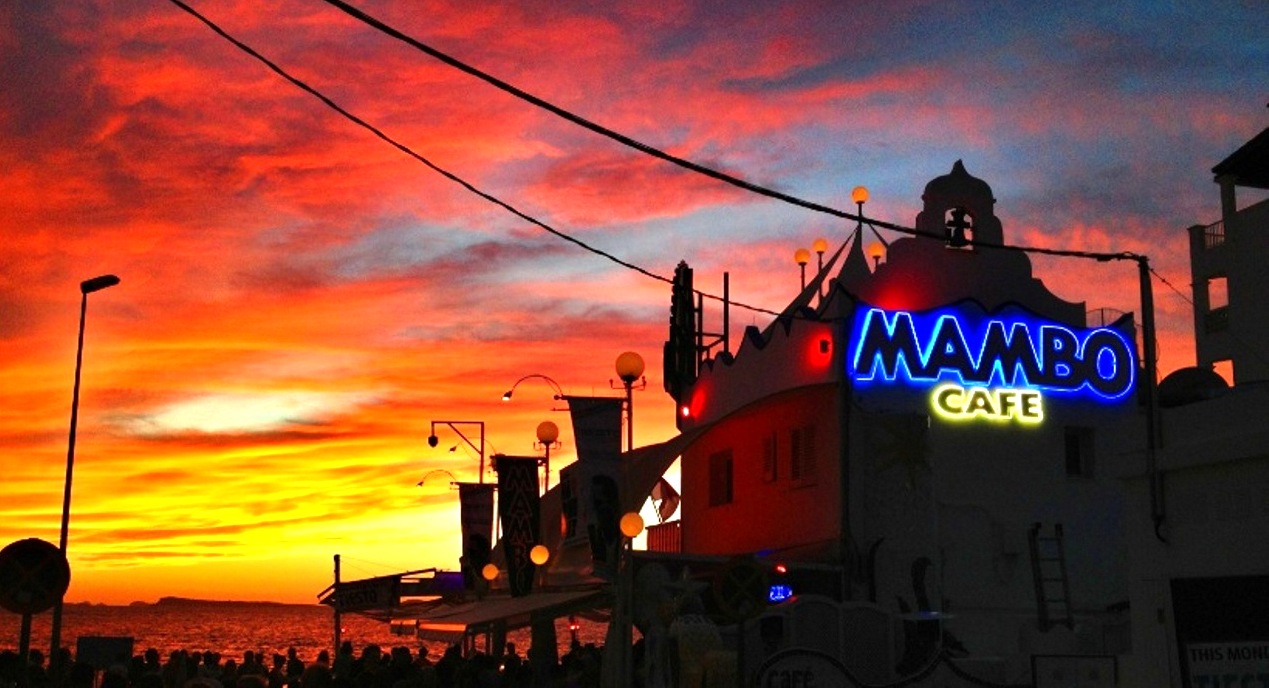 Arguably the smallest of the venues to make this list, the iconic Café Mambo sits as the center of San Antonio’s sunset strip. Tens of thousands of visit Ibiza each summer make the trek to hear some of the world’s best DJs play for free at the small restaurant and lounge, all the while enjoying one of the most beautiful sunsets in the Mediterranean. 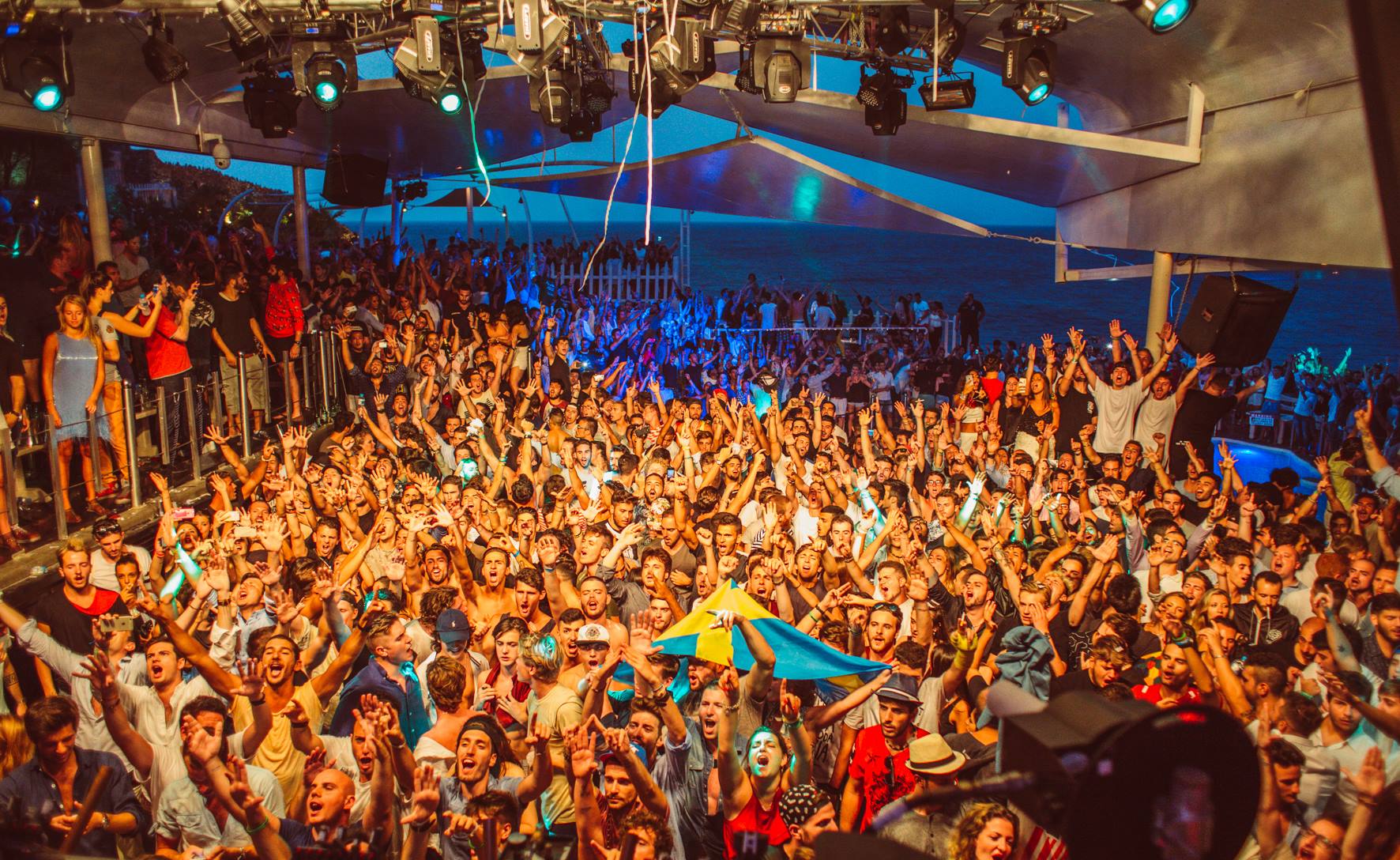 Happily nestled on an island off the coast of Greece, Cavo Paradiso is arguably one of the most beautiful places to experience a party. Cavo Paradiso features programming across the dance spectrum; you’re just as likely to see nights featuring Kaskade and Laidback Luke as you are Sven Vath and Marcel Dettmann – we’d obviously chose the latter. With pristine views across the Aegean Sea and a remote location, Cavo Paradiso should make it onto your summer itineraries. 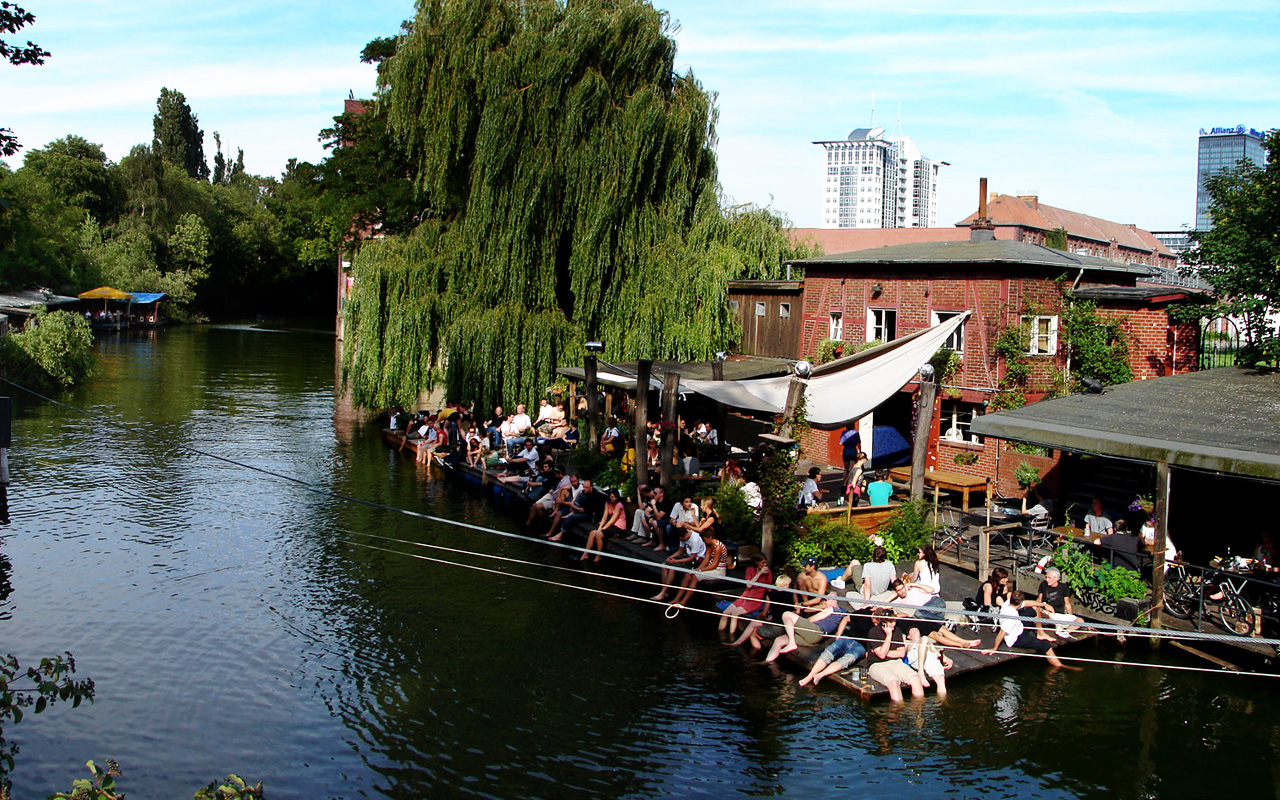 There’s a reason Club der Visionare is a favorite among the likes of Cassy, Ricardo Villalobos, Ion Ludwig, and electronic enthusiasts in general. The location, the atmosphere, the music… it’s hard to pinpoint exactly what makes Club der Visionare so special, but ask anyone who’s been and they will all attest to the venues charm. Situated eloquently on the Spree River in Berlin, the cozy open air terrace at Visionare should be on everyone’s itinerary this summer. 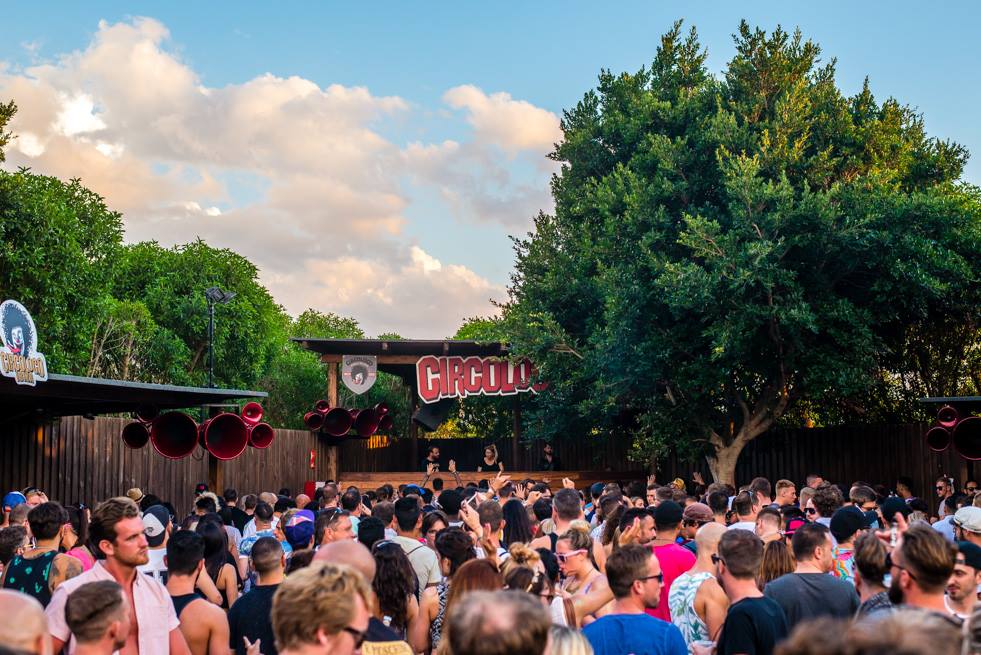 Whether starting your DC-10 experience or stepping out for fresh air, The Garden at DC-10 is the place to be. During the famed Circoloco parties it’s a perfect way to relax in the afternoon listening to a range of esteemed Circoloco residents, while mentally preparing for the forthcoming groove-a-thon on the terrace or main room. Equipped with a serene backdrop and a Void Acoustic Soundsystem, The Garden at DC-10 is a must visit this summer. 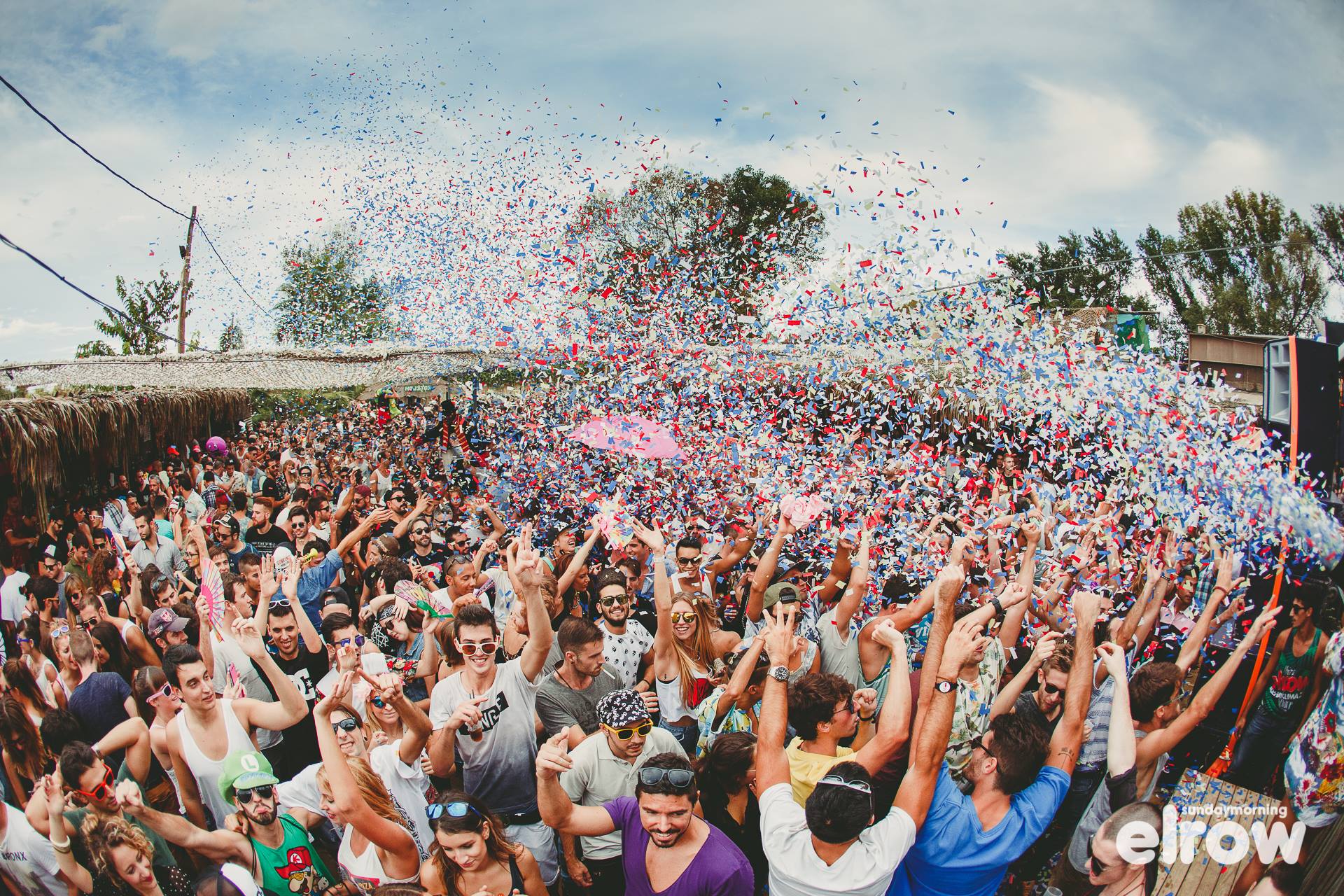 There is arguably no party in the world more colorful, boisterous and crazy than elrow’s themed Sunday events. Although the vibe and feeling has been traveling the world over, with residencies in Ibiza and appearances as far as BPM Mexico, Miami Music Week and Dubai, elrow begun and still exists at the Barcelona venue that lent the party its name. Summer days spent under the Barcelona sky and a shower of colorful confetti? There is no doubt that elrow is one of the most sought-after party destinations in the world. 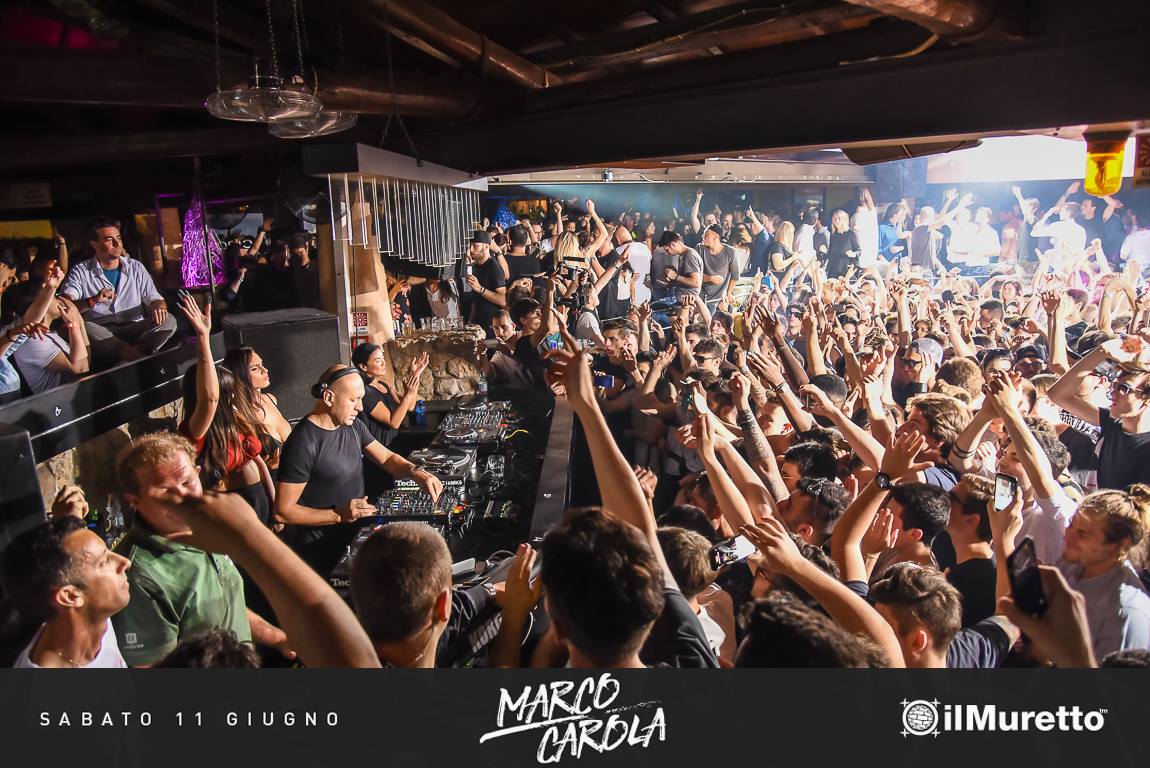 Some may disagree with this inclusion, but the truth is that Il Muretto’s beach-side location is partly indoors and partly outdoors, with a total of 750 square meters opened to the skies above. Located in an über-popular tourist beach town in the province of Venice, Il Muretto has opened in 1961, at first welcoming the likes of Ray Charles and James Brown to perform. It has since transformed itself into one of the most famous nightclubs of Europe, last summer hosting Carl Cox, Dixon, Sven Väth, Len Faki, Marcel Dettmann and Marco Carola just to name a few.

A European-style garden patio in the middle of Hollywood. Le Jardin essentially took over a parking lot and transformed it into a slice of Europe, the setting chosen by LA-based promoter La Vibe too host such names as Rhadoo, Lee Burridge, Matthew Dekay and Bedouin just to name a few recent ones. 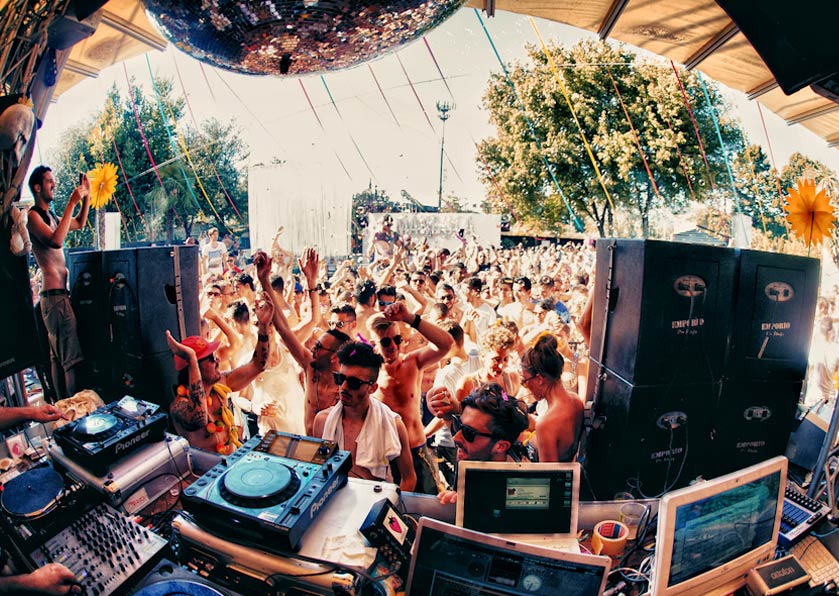 Manduca is an open-air lounge and club in Florence, the Renaissance capital of the world. Essentially a lounge and restaurant most of the week, Manduca truly comes alive for Sunday Sunflower parties featuring the best in International and Italian house, deep house and techno. The vibe is electric, as is the setting complete with pool and surrounding palm trees.

Output opened up in Brooklyn, New York, with the goal of bringing back a slice of underground to a city often lost in the glitz and glamour of bottle service and VIP. It did that successfully and then opened up its rooftop patio, offering perfect Sunday day parties with breathtaking views of the best skyline in the United States. Admittedly, Red Rocks features little to no house and techno, but it still maintains its spot as one of the most majestic and revered outdoor venues in the United States and the world. It’s a true sight to behold both acoustically and visually, and is set to host a selection of top-tier bands and EDM artists throughout the summer season including LCD Soundsystem, Above & Beyond, Twenty One Pilots, Portugal The Man, Big Gigantic, M83 and Bob Moses just to give some examples. It’s no surprise that Red Rocks was given an honorable mention as one of the most unique festival destinations in the world. 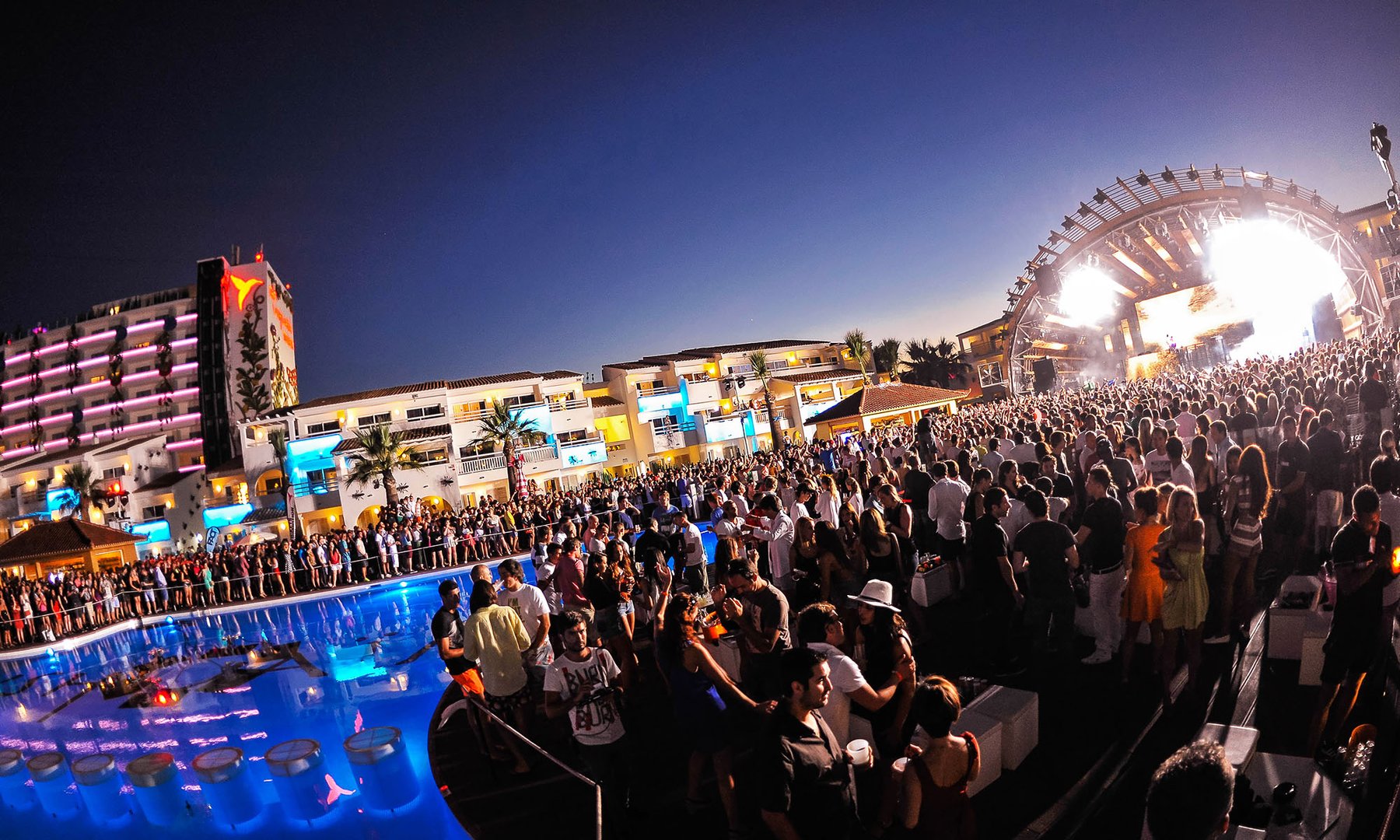 Back in the late 80’s, it was the outside terraces of Amnesia first, and Space second that turned the Balearic island into a worldwide renowned party destination. While currently both those rooms are covered now, Ushuaïa has taken over as Ibiza’s biggest outdoor venue, hosting daily parties until midnight throughout the summer season. Although most of the parties feature EDM, 2016 will play host to the return of Ants as well as a brand-new Solomun +Live residency. 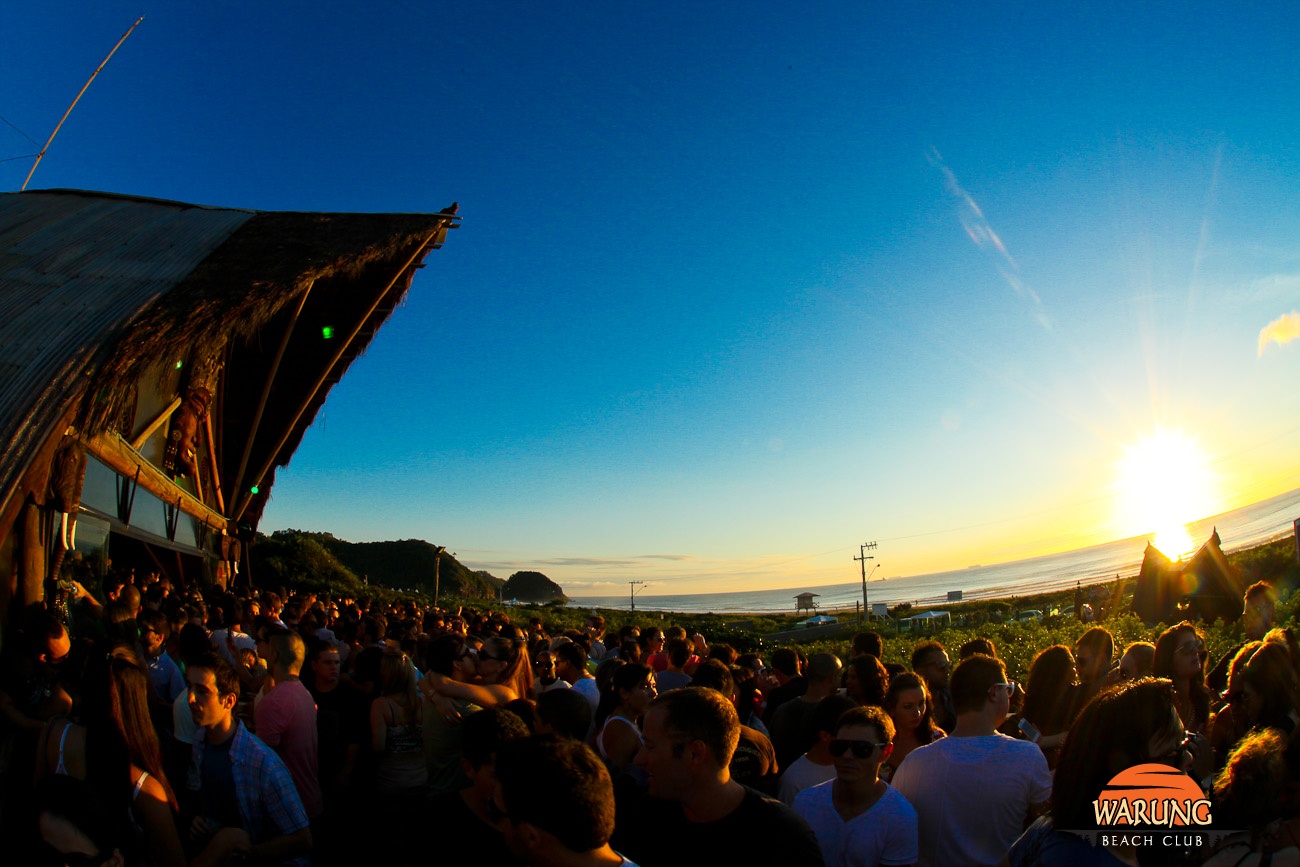 A beach club overlooking a Brazilian beach with music from the top-tier international touring DJs of techno and house? Warung Beach Club makes this list because nothing in the world comes quite close to it as far as sheer backdrop and quality of music. The venue may not be in Rio de Janeiro, Sao Paolo or even Brasilia, but remains a literal clubbing destination for  the thousands who travel to the small southern Brazilian town of Itajai just to experience one of its majestic sunrises while witnessing high-caliber DJs behind the decks. 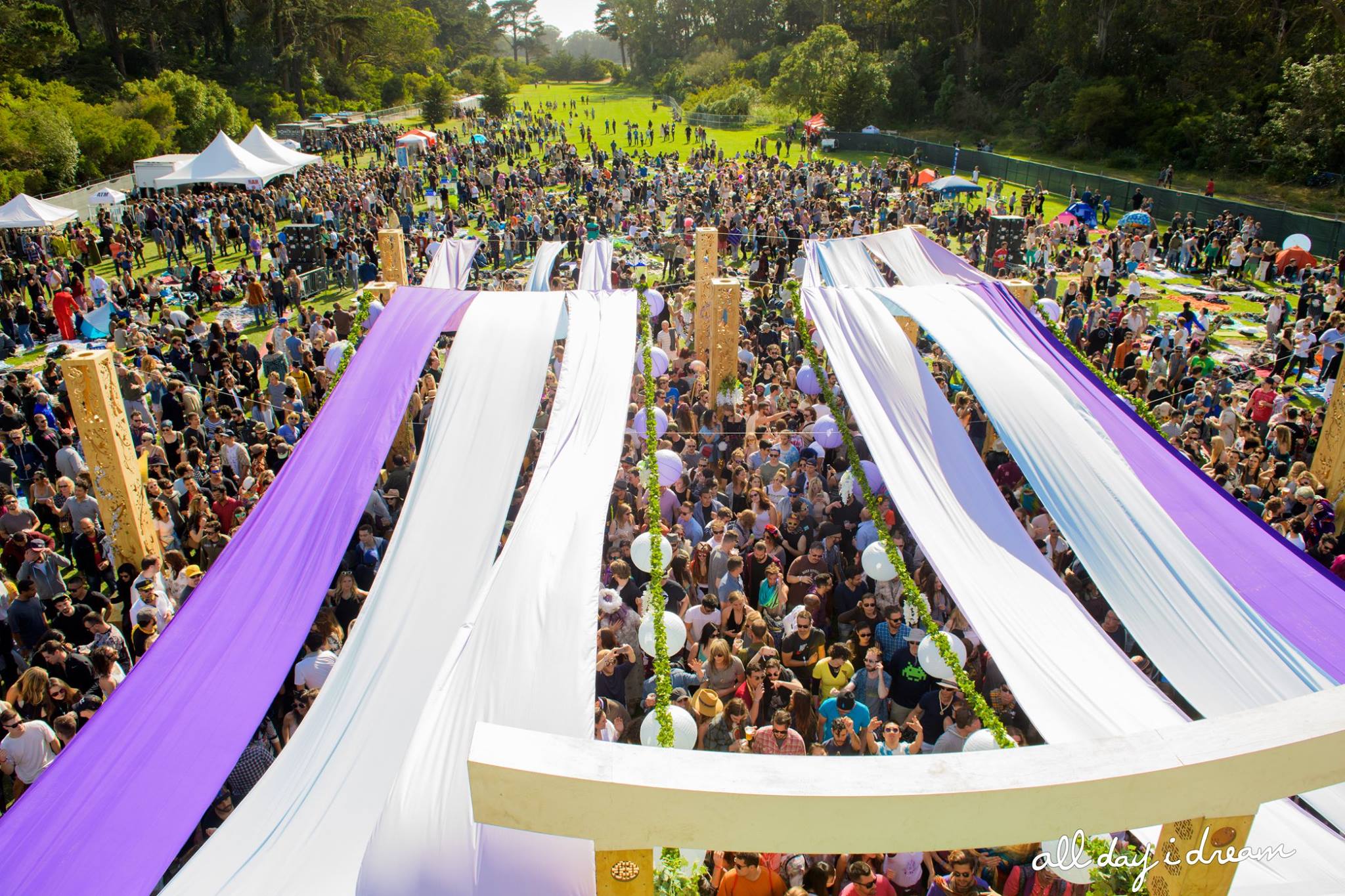 Honorable Mention: All Day I Dream

Ok, I admit I am cheating with this one. While not an official venue, there’s no denying that Lee Burridge has curated one of the most recognized open air events with his All Day I Dream series. Whether Burridge and his label are taking over beach clubs in Lebanon, Governors Island in NYC, Golden Gate Park in San Francisco or open-air venues in London, All Day I Dream remains one of the best open-air parties to travel the globe, offering amazing music and unparalleled outdoor vibes.